Both parties are taking some steps to help create an atmosphere that is conducive to successful talks, including President Abbas’ statement that he will work against incitement of any sort...
Statement on Special Envoy George Mitchell's Trip, May 9, 2010

Later today, Itamar Marcus of Palestinian Media Watch is going to present a report illustrating how Abbas continues to incite hatred of Israel--after promising to stop doing exactly that:


The report, which Marcus said he would be presenting to American officials in Washington on Wednesday, said that the PA continues to teach on PA educational TV that Israeli cities across the entire country, including Jaffa and Haifa, are Palestinian cities; that official PA media deny Israel’s right to exist by using terminology to refer to Israel as “the homeland occupied in ‘48”; and that the conflict with Israel is defined by PA-appointed political and religious leaders not as territorial but as ribat – a religious war for Allah.

To get an idea of what Abbas is up to, here are some of the cartoons from Fatah newspapers that have appeared over the last few months--featured on Cartoon Collection the PMW website: 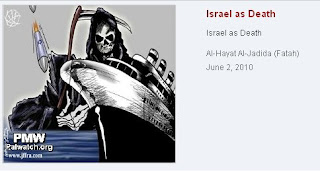 See the rest of the Cartoon Collection.

This goes beyond the incitement coming out of Abbas and his government recorded during proximity talks in May:

The fact that Abbas continues to fuel hatred against Israel is clear.
The only real question is what Obama is going to do about it.

Daled, you know the answer as well I do.

Nothing is going to happen to Abu Bluff. And Israel's spineless government is not going to terminate the non-productive proximity talks until Palestinian incitement stops.