Deena here is not impressed by all the goods available to Gazans with the new looser restrictions on Gaza:

So Deena, you want concrete and building materials?
You got it!
(And this is while your people fire rockets on Israeli civilians--imagine what life would be like if you didn't?)

Welcome to the new Gaza Mall! 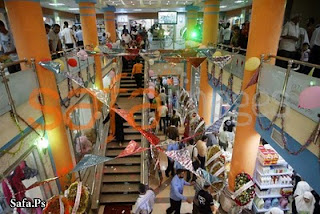 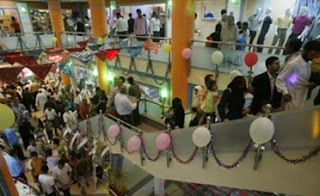 It was opened during an impressive ceremony, attended by ministers and government officials. The shopping center in Gaza is a multi-storey shopping mall where you can buy food from around the world (Holland cheese, French specialties, orange juice from Florida, Falafels Israel, etc ...), clothing (Emporio Armani, Levi's, etc ...), perfume (Dior, etc ...), footwear, household appliances, office supplies and more.

Everything is of course conditioned, with parking for 600 vehicles and rides for children. This shopping center in Gaza has also a website where you can for example read: "Israeli pants at an attractive price" or "man's shirt made in USA" or "ladies' dresses made in France" or finally "Pentalon Child Made in Turkey"

Gaza is really, more than ever perhaps, a terrible open prison!

This will make a nice addition to the new restaurant, fancy hotel and olympic pool!

Of course, there is a much more negative side to all this--Hamas has apparently been using the cement they have been smuggling into Gaza to rebuild the prison, police stations--and this mall. In the meantime, the Gazans who have been exploited by Hamas as human shields are still living in plastic tents. Of course, this is not surprising--Hamas is the same terrorist group whose leadership spent Operation Cast Lead hiding in the basement of a hospital, while Gazans were abandoned to face Israel's attack to stop the 8 year barrage of rockets. Hamas was too busy using its cement to build weapons bunkers near schools and hospitals to take the time to build bunkers to protect its own people from its policies of death.

The media has of course been very obliging to Hamas--blasting Israel for the discrepancy of the numbers killed, without noting the discrepancy in how Israel and Hamas take care of their own.