[A]t a White House banquet, Avner’s lavish kosher meal created such a stir with his table companions that across the room President Gerald Ford wondered what was going on. It was Avner’s birthday, explained Prime Minister Rabin. Accordingly, the U.S. commander-in-chief led the entire banquet hall in a chorus of “Happy birthday, Yeduha,” unaware that Avner’s name had been misspelled on his place card. Afterward, Rabin explained to Avner that he had no choice but to fabricate the story about his birthday. Otherwise, he tells him, “there’d be a headline in the newspapers that you ate kosher and I didn’t, and the religious parties will bolt the coalition, and I’ll have a government crisis on my hands.”
Lee Smith, recounting an episode in Yehuda Avner's book The Prime Ministers 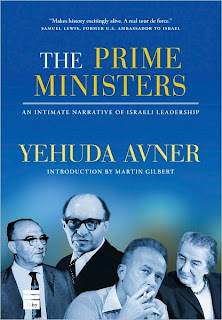 The Prime Ministers: An Intimate Narrative of Israeli Leadership is a new book by Yehuda Avner

, who served under various capacities for Levi Eshkol, Yitzhak Rabin, Golda Meir, and Menachem Begin. Lee Smith reviews the book and notes that Begin in particular tends to dominate, even in the retelling of events when he was not the prime minister.

Smith, who spoke to Avner about his book writes:


“He [Begin] was a quintessential Jew,” said Avner, who, as he explains, had not been a Begin supporter until then. “For years the word ‘terrorist’ clung to him,” Avner told me, “and when he was elected in 1977 he was described in many a corridor of power as a ‘warmonger.’ Nevertheless, it was he who won the Nobel Peace Prize for negotiating the peace with Egypt. Upon election he asked me to stay on working with him as an adviser, and I was hesitant at first. I asked him for time to think it over, and he said, ‘You want to speak to Rabin don’t you?’ Yes, I told him. So I called Rabin and he said, ‘Take the job, Begin is an honest and responsible man. He’s your kind of Jew, observant.’ Before Begin, all of Israel’s leaders were diehard socialists. It was unheard of before him, for example, that a dinner at the White House would be kosher. After him, all White House dinners for visiting Israeli prime ministers are kosher.”

...“What opened my heart was the man himself,” Avner said. “His nobility stretched into the small things. I was recently telling Natan Sharansky something about Begin, which he didn’t know and which brought tears to his eyes. When Sharansky was imprisoned in the Soviet Union, his wife, Avital, received a government stipend to make phone calls to Moscow each week to keep the campaign for his freedom alive, but some bureaucrat told her she was overstepping her budget. When Begin heard about this, he instructed that all of these bills should come to him, and he would pay for them out of his own pocket.”

Yaacov Lozowick, where I found about about Lee Smith's article, writes that The Prime Ministers is "yet another book we've got to read, I guess."