Unidentified gunmen set fire Sunday to the Crazy Water Park, one of the Gaza Strip’s most popular entertainment sites.

Eyewitnesses said that at least 25 men participated in the predawn attack. The gunmen beat the two night watchmen, bound their hands and confiscated their mobile phones before setting the complex on fire, they said.


Manager Ala al-Araj, a former cabinet minister in the unity government formed after the Palestinian Authority elections in 2006, said that the water park was closed down by Hamas two weeks ago. He said that no one was injured in the attack, which destroyed the Gaza City resort completely.

No group claimed responsibility for the arson and the Hamas government, which issued a strong condemnation, promised to pursue the perpetrators and bring them to trial. 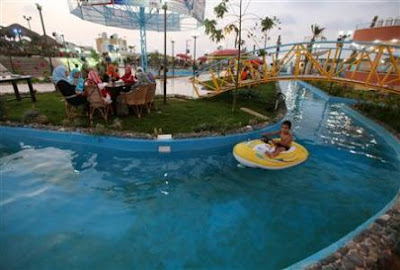 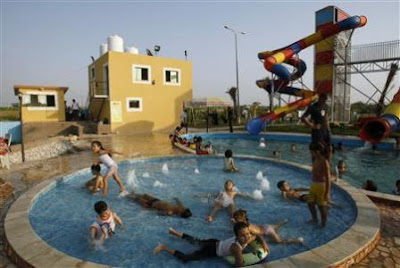 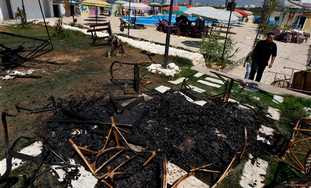 The Palestinian Centre For Human Rights has a list of what was destroyed:


Damages were caused to large parts of the buildings and restaurants of the 10-dunum Park. They are:


1) (Al-Safeena) building, consisting of 3 floors on an area of 250 m². It includes the administration and the restaurant;
2) Accounting and warehouses building, on an area of 140 m²;
3) Al-Badiya section, which includes works of the Palestinian heritage, in addition to two mosques for men and women on an area of 300 m²; and
4) Narjila (Hubly bubbly) room.

PCHR also notes that this is not the first time this sort of attack has occurred:


It is worth saying that two camps of the UNRWA summer games' camps, one of them was held on the beach, in the west of al-Zawaida village, in the central Gaza Strip, and the other one was held at the beach in the west of Gaza City, were similarly attacked on 28 June 2010 and 23 May 2010.

The Israel Project notes that Hamas would have had a motive in attacking the summer camps:


Hamas recognizes that the UN-run camps are the biggest competition to its own camps and has repeatedly denounced them to reduce their popularity. In 2009, Hamas officials alleged that drugs were used in the UNRWA camps and a Hamas-affiliated Web site claimed that the UNRWA camps spread disease.

On Aug. 2, 2009, a Hamas spokesman said the UNRWA camp was a “barbaric attack on our children at the inferior summer camps [those run by UNRWA] whose objective is to corrupt their morals with drugs and other things.”

Hamas would have had a motive in destroying the park as well, as indicated in the Jerusalem Post article:


The Hamas government had ordered the closure of Crazy Water Park for three weeks under the pretext that it did not have a proper license.

Last month, Hamas policemen raided the resort and expelled dozens of men and women who had gathered for a fast-breaking meal during Ramadan. The owner of the facility was summoned for questioning and warned not to hold events where men and women sit together.

Sources in the Gaza Strip said that Hamas has been targeting the water park because the owners violated an order banning women from smoking nargilas in public places.

Last week, the Hamas authorities closed down the Sama seaside restaurant, also in Gaza City, where a woman was seen smoking a nargila.

Human rights activists said that Hamas has recently stepped up its efforts to impose strict Islamic observances in the Gaza Strip.

One wonders how burning down mosques might fit in with that.

As for burning down mosques, Muslims have never had much respect for their own holy places.

They're outraged when infidels prevent them from building one but when no one's looking, they vandalize even their own sites.