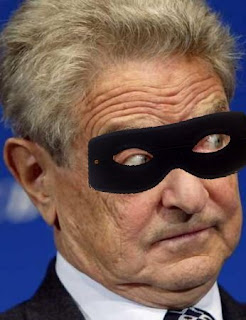 George Soros has donated money to a large number of groups--which of course is his right. Naturally, it is also right that we should be aware of those causes that rely heavily on Soros's largesse--especially when those groups claim to be independent of outside or foreign influence.

J Street presented itself as representing the authentic voice of American Jews.
We now know that is not true.
There is a similar problem with Human Rights Watch.


We have learned that J Street is not the grassroots group it has made itself out to be; rather, it is but one anti-Israel organization that George Soros had founded and funded. It isn’t simply $750,000 for J Street to advance its (or rather, Soros’s) Israel-bashing agenda. There is also Human Rights Watch.

As many others have documented, Human Rights Watch is another exercise in false advertising. Noah Pollak has adeptly analyzed HRW’s anti-Israel agenda, which has featured infamous figures like Joe Stork. Who is HRW’s sugar daddy? None other than George Soros – to the tune of $100 million.

Rubin notes that the J Street/HRW combo packs a particularly potent punch when it comes to Israel:


A pro-Israel activist sums up (I have provided links for reference purposes):


Jeremy Ben Ami says he wants to change the meaning of “pro-Israel,” and now this week we hear from him what we’ve suspected all along: that J Street is “with the values and principles” of George Soros, and we all know what that means when it comes to Israel. His $100m gift to Human Rights Watch after their founder denounces them in the New York Times as obsessed with Israel and having lost all moral basis, their top military analyst is outed as an avid collector of Nazi memorabilia, and the head of their Middle East division, who has a poster in her office for a movie praising suicide bombing, is caught with her hand in the Saudi cookie jar begging for money to beat up on Israel, is a vivid reminder of who J Street’s mentor is.

This is without going into Soros's funding of Moveon.org and other similar groups.

Soros Street has an agenda, and it is not the one that he has proclaimed in public.
Human Rights Watch is equally subjective in the way it does its job.
These groups--like all heavily funded Soros groups--reflect neither popular opinion nor objective standards of international law.

These are political action committees that express the opinion of the billionaire who is behind them.