The accusation that Israel has colonialist roots because of its connection to the British Mandate is ironic, since most of the Arab states owe their origins to the entry and domination of the European powers. Prior to World War I, the Arab states of Iraq, Syria, Lebanon, and Jordan did not exist, but were only districts of the Ottoman Empire, under different names. They became states as a result of European intervention, with the British putting the Hashemite family in power in two of these countries.

Saudi Arabia and the smaller Gulf states, meanwhile, emerged from treaties that their leaders signed with Britain. By means of those treaties, the British recognized the legitimacy of local Arab families to rule what became states like Kuwait, Bahrain, and Qatar. A similar British treaty with the al-Saud family in 1915 set the stage for the eventual emergence of Saudi Arabia in 1932.
Dore Gold, Historical Fiction: Israel is not a colonialist state, The New Republic

I found this aspect of the history of the modern history of the Middle East fascinating for the simple reason that it is so often overlooked--and distorted. 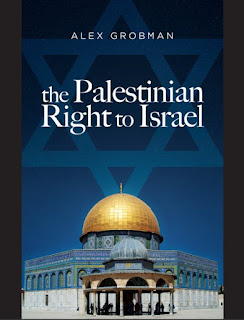 And that is one of the reasons I enjoyed Prof. Alex Grobman's new book, The Palestinian Right To Israel. Dr. Grobman is a historian who is also the author of Nations United: How The Global Body Undermines Israel And The US, as well as Battling For Souls: The Vaad Hatzala Rescue Committee in Post-War Europe

, and Denying History: Who Says the Holocaust Never Happened and Why Do They Say It?

Grobman provides an overview in the first chapter, An Uninterrupted Jewish Presence--documenting the history of Jewish communities in the land even after the destruction of the Second Commonwealth by the Roman Empire in 70CE.

He then continues with:
Prof. Grobman's book is well document--not only in terms of the footnotes, but also in the resources he marshals to support his points.

For example, in dealing with the above-mentioned "colonial roots" of the Arab world, Grobman quotes:

As Grobman sums up:


[T]he Arabs emerged from World War II with at least two kingdoms, four republics, six seats in the U.N. and one in the Security Council. Weizmann questioned whether this was commensurate with what the Arabs contributed during the war. How many fatalities did they sustain? To what degree did they suffer? (p. 162)

I highly recommend The Palestinian Right To Israel both for its unique approach to understanding the issue of 'rights' to Israel and for the resources it places at the disposal of the serious reader.

Technorati Tag: Israel and Balfour Declaration and Alex Grobman and The Palestinian Right to Israel.