There I was, for several days (as may happen again), focused on family matters and attending to the news less vigorously than is my norm.  Now that I'm back to concentrating on Israeli and world events, I'm not sure how much I really missed.  Certain issues are simply recycled, and recycled, and recycled.
~~~~~~~~~~
I have in mind, most significantly, the prospect of Secretary of State Kerry returning to this area to "advance" the "peace process."  He will arrive in Amman, Jordan late today and use this as his base for shuttle diplomacy.  An exercise in futility that I had expected him to abandon before now.  Silly me.

He says, "notwithstanding all of the conflict, notwithstanding all of the counter indications," the Obama administration hopes to bring peace to the area.
There had been media reports of a readiness on the part of Abbas to return to the table without pre-conditions. But yesterday he made it clear that this was not the case.
Jordan's King Abdullah, who sits very uneasy on his throne and is greatly eager to participate with the US in "peace efforts," told Asharq al-Awsat -- an Arabic daily in London -- that,


"Fading prospects of peace will explode relations between Palestinians and Israelis in a manner emulating the Arab Spring protests, either through a new intifada or a new cycle of violence and counter violence."

Violence, there may well be.  In fact, we are clearly seeing it already. But it is nothing but nonsensical rhetoric to compare this to "Arab Spring protests."
~~~~~~~~~~
The greatest concern we must have, as Kerry comes to do his "thing," is what pressure will be brought to bear on the Israeli government to make concessions -- and what Netanyahu might agree to, in order to demonstrate once again ("the more things change...") that Israel is not the stumbling block.  The possibility of a more formal partial building freeze or the release of some terrorists from prison stares us in the face.
What we are seeing, however, is growing discontent within the Likud party regarding Netanyahu's willingness to play along with negotiation efforts.
Danny Danon, Deputy Minister of Defense, has been challenging Netanyahu for some weeks.  Netanyahu's efforts to muzzle him have been anything but successful.
Late last night, Danon won the election -- handily, with 85% of the vote -- for the presidency of the Likud Convention Committee.  While this is a largely symbolic post, it is an indication of current sentiment in Likud.
And...just possibly it is an indication of how the very significant election for Chair of the Likud Central Committee may go on Sunday. That is a powerful position that confers control of the party's internal apparatus.  Danon staunchly maintains that the 3,500 member Central Committee is against a "two-state solution."
At a rally with his activists in Tel Aviv, he said:

"The party has been in a coma lately.  We will help lift up the Likud with energy like it had was when I was a child. We will restore the party’s soul...To maintain the Land of Israel, we need to do it with political work. We cannot afford to sit on our hands." 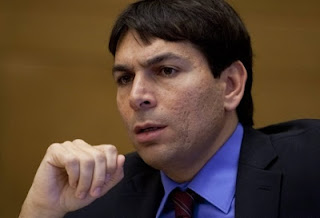 Credit: Dudi Vaaknon/IsraelHayom
~~~~~~~~~~
No change in the Syrian civil war either -- except that the numbers of dead increases daily.  It is now estimated that 100,000 have died.
In recent days the battle has shifted focus to the northern city of Aleppo, where rebels have had partial control. Assad is working, area by area, to regain territory under rebel control.  The rebels are determined to hold fast after having lost the fight for Qusayr recently, and they are still showing strength and determination.  But some 3,000 Hezbollah troops have been sent to Aleppo to duplicate that Qusayr victory.  It's anyone's guess how this will play out.  It does not help the rebel cause, that their troops are severely divided into factions.
~~~~~~~~~~
While King Abdullah's comments about Israeli-Palestinian Arab tensions were off the mark, I think he's right on with regard to the situation in Syria:

"It has become clear to all that the Syrian crisis may extend from being a civil war to a regional and sectarian conflict...the extent of which is unknown."

Jordan has already taken in 500,000 Syrian refugees -- a cause of the instability in his country at present.
~~~~~~~~~~
I end today with an article by Dr. Reuven Berko -- "The caliphate on the horizon," which takes a look at the Islamists in Syria.  (Emphasis is added.)

"The Islamists in Syria are armed, primarily with patience...The Islamist leadership has a clear doctrine.

"The leader of the rebel group Soqour Al Sham Brigades, Hassan Aboud, recently gave an interview. Heavily armed and dressed in khaki fatigues, Aboud spoke with chilling tranquility, declaring that his first order of business was against Iran (until its ultimate expulsion from Syria) and the destruction of Hezbollah, 'who will return from the battlefield to Lebanon, where they came from, dead.' The bearded sheikh isn't impressed by the regime's recent gains. His demeanor exudes patience and a confidence that Islam (the Sunni version) will prevail.

"Aboud's agenda is the foundation of an Islamic caliphate, with its center in Greater Syria. According to Aboud, the artificial states created by the West in the Middle East, within the framework of the Sykes-Picot Agreement, have disintegrated, ushering in the current return of the great Islamic state. Iraq, in Aboud's view, will be part of the future Islamic Syria, after the Shiites there are defeated. Along with the Iranians, the Russians will also be driven out of Syria and its ports.

Aboud's declarations point to the alienation between the other Islamist movements fighting in Syria, as well as between the secular elements in the Free Syrian Army. Indeed, Aboud rejects the participation of former Syrian military commanders, those who have defected, in the country's future leadership and denies them any piece of the future government pie -- because they are 'outsiders.'

"He does not conceal his Islamist agenda, which stipulates that Syria is only the beginning. The destruction of Israel, the enemy of the Islamic nation, is the next objective. After this the Islamic mission will focus on the rest of the world."

Read: The Caliphate on the Horizon

~~~~~~~~~~
© Arlene Kushner. This material is produced by Arlene Kushner, functioning as an independent journalist. Permission is granted for it to be reproduced only with proper attribution.
If it is reproduced and emphasis is added, the fact that it has been added must be noted.


Technorati Tag: Israel and John Kerry and Likud and Syria.