New Survey Results--Is It Enough To Influence The Obama Administration On Israel? (Updated)

McLaughlin & Associates has come out with a new poll about how Americans feel about terrorism, Iran, and Israel [PDF].

Some of the findings:
Given the numbers about how Americans feel about creating a second Palestinian state, does the survey do anything to support those who oppose the two state solution?
Probably not. Just take a look at the results of a poll taken by McLaughlin & Associates back in 2003:
Even with these strong numbers, talk about the two state solution has only grown stronger to the point that its proponents claim that stability in the entire region depends on giving Palestinian Arabs their own state.
Of course, the fact that Israel--especially when Olmert was Prime Minister--tacitly accepted the idea made it easier to both back the idea of a second Palestinian state and claim to still be a friend of Israel.
The question remains whether the implications of the current poll provide ammunition to influence the stance of the Obama administration on the issues.
Oh. I saved the most interesting results of the survey for last--look at what Americans consider to be a bigger threat than Al Qaeda and Iran. 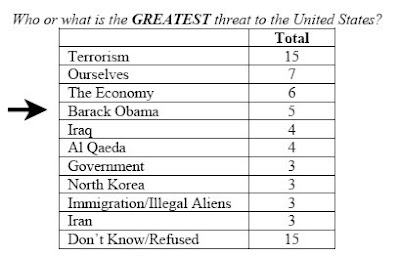 Check out the survey [PDF].

UPDATE: Jennifer Rubin analyzes the results, especially how it plays out across party affiliation. She concludes:

Americans are “not naive,” as the president likes to say, about Iran and are very supportive of Israel. As to the former, given the level of concern about an attack on a U.S. city, a policy that seemed to tolerate Iranian possession of nuclear weapons would be very unpopular. Finally, the difference along party lines with regard to Israel is noteworthy and troubling (at least to those who believe a robust relationship between the two countries is in their mutual interests), especially at a time when Democrats dominate both ends of Pennsylvania Avenue.