Anyone Taking Bets On The Next Time Obama Will Give A Speech In Cairo? 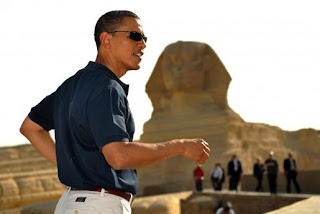 Leon Wieseltier writes about Obama's predicament in Egypt--and that it cannot just be blamed on Bush's agenda:


Obama replaced the freedom agenda with an acceptance agenda. His foreign policy has been conducted in a vigorously multicultural spirit. He rightly sensed that an emphasis upon democratization was a critical emphasis—a castigation of the existing dispensations in countries ruled by autocracies and authoritarianisms, and he did not come to castigate. He came in friendship, to “restore America’s standing.” He sought to do so with an embrace of differences, an affirmation of religions, a celebration of civilizations. As a matter of principle, such assertions of respect are right and good. But what if the positive tone misses the point—not about the dignity of other peoples, but about their actual circumstances?
Of what use is happy talk to unhappy people? Do societies desperately in need of secularization and its blandishments really need the American president to cite their Scripture to them? In accordance with his warm new priorities, democracy was the fourth of Obama’s five themes is his speech in Cairo in 2009, the one called “A New Beginning.” When he finally got around to it, he introduced it this way: “I know there has been controversy about the promotion of democracy in recent years, and much of this controversy is connected to the war in Iraq. So let me be clear: no system of government can or should be imposed by one nation by any other.” Or: the United States will no longer bother you about how you are living. He then proceeded to a fine little sermon about the virtues of government “through consent, not coercion,” but said nothing about the political conditions in Egypt. The Cairo speech did not discomfit the Mubarak regime. I imagine that many of Obama’s listeners in Cairo that day are on the streets of Cairo today, and some of them attacked the American Embassy.

It was a terrible mistake for Obama to make democratization seem like an “imposition,” with its imperialist implications, and to conflate it with military invasion. [emphasis added]

At some point--and soon--Obama is going to have to take a stand. Just standing on the sidelines like he did during the protests in Iran is just not going to cut it. US is much more invested in the future of Egypt, and the outcome of these protests will have a definite impact on Middle East stability as a whole.

(And no, I wouldn't bet on Obama visiting Cairo in the near future)