What's At Stake In Egypt? 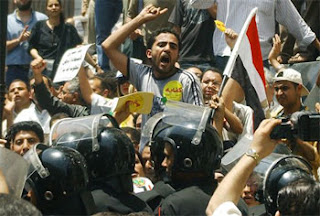 Remember I said it standing here if you don't remember anything else I said. Watch, we're gonna have an international crisis, a generated crisis, to test the mettle of this guy."
Joe Biden, about Obama, October 19, 2008

The unrest that toppled a government in Tunisia has spread across the region, with big street demonstrations in Egypt, Jordan and Yemen. It's a movement that appears leaderless - more like a "flash mob." But it shares a common sensibility - the rising expectations of a younger generation that sees global change on the Internet and has momentarily lost its fear of corrupt, autocratic leaders.
Washington Post, January 28, 2011

Okay, Biden was talking only 6 months--but these things take time.

Former New York Times columnist and senior government official Leslie H. Gelb describes the importance of Egypt for both Israel and the US:

The stakes are sky high. Egypt is the linchpin to peace in the Middle East. So long as Egypt refrains from warring against Israel, other Arab states cannot take military action by themselves. So long as Cairo remains pro-Western, it serves as an anchor for other such friendly governments. It occupies a central economic position in the region and a vital transportation hub through the Suez Canal. Most certainly, most Arab governments friendly to Washington need to make reforms. But to do so at a moment of weakness, to be seen as bending to mobs, however peaceful and moderate they look now, could open up the floodgates—in Egypt, Jordan, Saudi Arabia, and elsewhere.

Gelb adds that given the circumstances, it is understandable that the Obama administration is unsure on which tack to take: "to ride the tiger or help put him back in a cage"--support Mubarak or the protesters.

David Pryce-Jones is less forgiving--especially of the "fanciful" pronouncements coming out of Washington about the situation in Egypt:


Mrs. Clinton tells us that the Obama administration’s assessment is that “the Egyptian government is stable.” There has been no pronouncement quite so fanciful as that since Jimmy Carter praised the Shah of Iran as a pillar of stability in the Middle East six short weeks before the Shah was run out of Iran. Along with the Arab order, American policy in the Middle East is also shaking.

That's just Egypt; toss in those other Arab countries with their potential for major Islamist gains--and suddenly the economy may have major competition for Obama's attention for the next 2 years.

This is the first crisis?
Obama entered office in the midst of the huge financial meltdown.
He's had to deal with Russian aggression in Europe, the election violence in Iran and the ongoing chaos in Afghanistan. Has he handled any of them well?

I suppose you are right.

This one, though, I think is the most urgent with the most far-reaching consequences.

There is a crisis in the Middle East and it has NOTHING to with the Israel/Palestine issue. As every one without an agenda can see for themselves, even if that was resolved, none of the remaining conflicts in the Middle East would disappear. The events first in Tunisia and now in Egypt have thrown that up into sharp relief.