Dear Washington Post: The Muslim Brotherhood Is NOT Your Father's YMCA

Inspired by the YMCA when it was founded in 1928, the Muslim Brotherhood has been under a ban since 1948, and its real size is difficult to gauge. The group was brutally repressed by President Gamal Abdel Nasser in the 1950s and 1960s. Since then, it has at times been propped up as a foil - especially for Western audiences - with periodic crackdowns that have sent many of its members to prison.
Washington Post, January 31, 2011 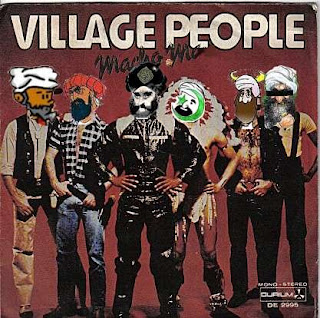 While the Washington Post may be ready to burst out in song about the virtues of that "brutally repressed" group--the Moslem Brotherhood, it might be handy to remember just who these people are: 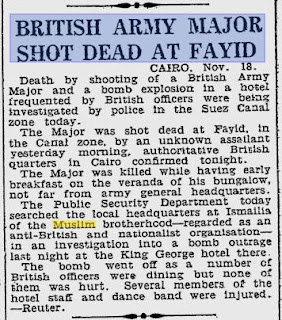 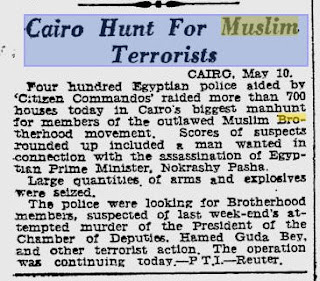 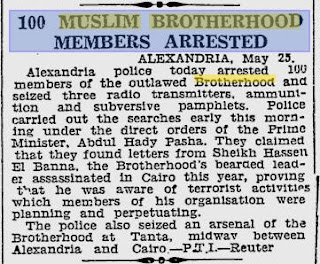 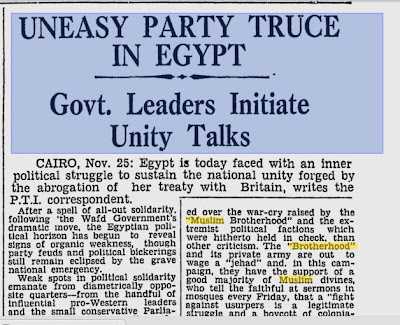 From the right column of that article:

"...The Brotherhood" and its private army are out to wage a 'jehad' and in this campaign they have the support of a good majority of Muslim divines who tell the faithful at sermons in mosques every Friday night that a fight against usurpers is a legitimate struggle and a boycott of colonialism is a duty"

And if, as the Washington Post claims, "the group was brutally repressed by President Gamal Abdel Nasser in the 1950s and 1960s"--it is clear they gave as good as they got: 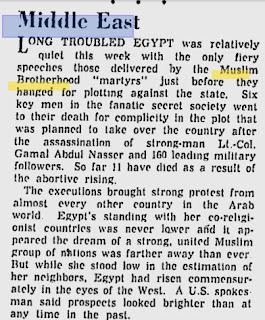 And that is just what they did to the British and to their fellow Muslims.
When it came to the Jews, the Muslim Brotherhood's Antisemitism had a decidedly un-YMCA flavor:


“Down with the Jews!” – “Jews get out of Egypt and Palestine!” were the slogans of the mass demonstrations which the Brotherhood organized in Egyptian cities in 1936. Their leaflets called for a boycott of Jewish goods and Jewish shops. Their newspaper al-Nadhir published a regular column called “The danger of the Jews of Egypt”. They also published the names and addresses of Jewish businessmen and the publishers of allegedly Jewish newspapers all over the world, attributing every evil – from communism to prostitution – to the “Jewish menace.”

Obviously, many of their actions as well as the rhetoric and the slogans used in this antisemitic campaign were clearly taken over from Nazi Germany. The Brotherhood, however, included Islamic roots of hatred against Jews as well. They used and disseminated a quotation from the Koran that Jews are to be considered ‘the worst enemy of the believers.’ In addition, they evoked old stories of the early history of Islam by pointing to the example set by Mohammed who, as legend has it, succeeded not only in expelling two Jewish tribes from Medina during the 7th century, but killed the entire male population of the third tribe and sold all the women and children into slavery. And they stressed (and still consider) Palestine as an Islamic territory (‘‘Dar al-Islam“) where Jews should never be allowed to govern a single village let alone an entire state.[emphasis added]

Daled, Barry Rubin, whose articles you repost on your site with his permission, has been thoroughly disgusted with the lack of objective media reporting on the Muslim Brotherhood.

It is NOT a moderate religious movement or even a group of democrats. The MB is a conspiratorial society of very extreme Islamists who vision includes not only Israel's destruction but the subjugation of the West under under an Islamic Caliphate.

If the MSM is going to report the events in Egypt, it would do well to report the truth. Radical Islamists governing Egypt would be a tremendous disaster for US interests. We can only hope the situation stabilizes in Cairo and some kind of long term transition to a democracy is worked out.

This should be the program the West, the US and Israel should all back. Holding free elections today would be guaranteed to bring the enemies of all three to power in a critically strategic nation. This must be avoided at all costs. The stakes for Egypt, the Middle East and the world could not be higher.