No One Expects The Palestinian Negotiating Team!

NOBODY expects the Spanish Inquisition! Our chief weapon is surprise...surprise and fear...fear and surprise.... Our two weapons are fear and surprise...and ruthless efficiency.... Our *three* weapons are fear, surprise, and ruthless efficiency...and an almost fanatical devotion to the Pope.... Our *four*...no... *Amongst* our weapons.... Amongst our weaponry...are such elements as fear, surprise.... I'll come in again.
Monty Python, The Spanish Inquisition 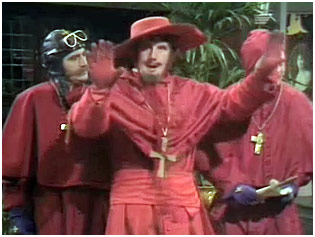 We all know that Abbas is fond of demanding preconditions before even sitting down at the negotiating table--one of the reasons that he has spent so very little time sitting down and talking face to face with Netanyahu.

But wait--how many preconditions do the Palestinian Arabs have?

Abbas's precondition of choice is of course freezing the settlements.

Of course, Netanyahu already put a freeze on the settlements once, while waiting for Abbas to get his act together and show up. Abbas didn't show up till the deadline for the freeze was nearly up.Then he promptly demanded another freeze.

No, actually there are two...two preconditions:


That's it then: The Palestinian Authority has 2 preconditions.

Wait! Actually there are more--there are really 5 preconditions.

Erekat said the demands included a complete halt to all Israeli settlement activity, 1967 borders as the basis for peace negotiations with mutually agreed land swaps, EU support for reconciliation talks "which will strengthen peace opportunities" and EU support for a Palestinian UN statehood bid in September.

He also wanted EU acknowledgment that a UN statehood bid does not contradict peace negotiations.

So, there we have it, 5 preconditions.


That's right: the Palestinian Arabs have 5 preconditions that must be fulfilled before they will first sit down to discuss peace.

No wait...actually there are 6, yes 6, preconditions--PA to demand Barghouti release as part of renewed negotiations with Israel:


The Palestinian Authority is set to demand that the Quartet pressure Israel to release prisoners in fulfillment of a pledge made by former Prime Minister Ehud Olmert to PA President Mahmoud Abbas, senior Palestinian sources told Haaretz on Monday.

Among the prisoners The PA wants released are Marwan Barghouti and Ahmad Saadat. The former is a member of the Fatah leadership, while Saadat is Secretary General of the Popular Front for the Liberation of Palestine (PFLP).

So now there are 6 preconditions that Israel must fulfill before Abbas will agree to first sit down and talk peace with Israel.

When it comes to sitting down and sincerely discussing peace:


Nobody expects the Palestinian Arabs.

Aha: There are actually seven preconditions that Israel must meet before Abbas will deign to sit down at the negotiating table with Netanyahu!

Challah Hu Akbar notes that the 7th precondition is that Israel must remove the blockade on Gaza:


He [Commissioner of International Relations, Nabil Shaath] said that resuming negotiations necessitates complete commitment to the peace process requirements; an actual and complete halting of settlement activities, recognizing the 1967 borders as terms of reference for negotiations and ending the siege on the Gaza Strip.

You may have noticed that Shaath only lists 3 preconditions before the Palestinian Arabs will sit down at the bargaining table.

Poor guy must have lost count.

Email ThisBlogThis!Share to TwitterShare to FacebookShare to Pinterest
Labels: Abbas Idea Of Negotiating

And if Netanyahu refuses, does he get put in .... the comfy chair?!