Great back story on tonight's White House Seder, which Obama aides say is a first for 1600 Pennsylvania Avenue, from NBC's First Read:

The Seder, it turns out, is a fulfillment of a vow that a small group of Obama campaign staff made during their Seder last year, on April 19.

Unable to go home for the holidays, the group of about 10 held an impromptu Seder in the basement of the Sheraton Hotel in Harrisburg, Pa., as the Obama campaign neared the end of its long primary campaign battle in the state.

Obama participated in the Jewish ritual, along with a few friends who were traveling with him that day. At the end of the ritual, after the traditional refrain "Next year in Jerusalem!" Sen. Obama and others in the group jokingly added, "Next year in the White House!"

Among those invited was Valerie Jarrett, one of Obama's closest advisers, and family friend Eric Whitaker, who was visiting from Chicago and attended a Seder last year with the campaign. First lady Michelle Obama and the family's two daughters also attended.

Also on the guest list were Eric Lesser, a personal aide to senior adviser David Axelrod, and his family. Lesser worked during the New Hampshire primary and later handled baggage for traveling reporters. White House videographer Arun Chaudhary _ a constant presence on the trail _ landed invitations for his family.

Looks like it turned out to be a pleasant intimate affair: 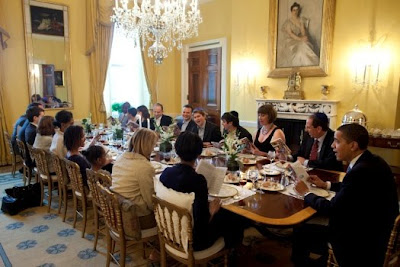 So it's only right that Obama have a special dinner in honor of Ramadan, a dinner that apparently is not planned to be quite as intimate:

Here is the list of invited guests, as provided by the White House:

To their credit, the White House invited Jews as well, including Ambassador Michael Oren of Israel.
And just about every Muslim they could think of.
Just part of reaching out to Muslims, but also another example of extolling Muslims while giving Jews and Israel short shrift--as Obama did in his inaccurate and one-sided Cairo address.