In an interview with 60 Minutes, Marc E. Garlasco, who has been a sharp critic of Israel, did a turnaround and said the following:


"I don't think people really appreciate the gymnastics that the Israeli military goes through in order to make sure that they're not killing civilians," Garlasco points out.

"If so much care is being taken why are so many civilians getting killed?" Pelley asks.

Wow!
Of course, Garlasco said no such thing--at least not about Israel. Instead he said the exact same thing about the US and the Taliban:


"I don't think people really appreciate the gymnastics that the U.S. military goes through in order to make sure that they're not killing civilians," Garlasco points out.

"If so much care is being taken why are so many civilians getting killed?" Pelley asks.

Odd that the criteria that Garlasco so easily applies to the US, he refuses to use when talking about Israel.

And it's not as if Human Rights Watch as a whole sees it as its job to end war. On the contrary, HRW clearly understands that casualties in war are unavoidable, but innocents must be protected to the degree possible under the circumstances. Tom Malinowski, the Washington advocacy director of Human Rights Watch, was quoted in The Washington Post that:


The objective is not to end war, it's to change the way militaries wage war.

Garlasco, too, when accused of committing war crimes for the part he played while working in the Pentagon in 2003, when he recommended a target that resulted in the killing of civilians--responded that civilian casualties are unavoidable:


I did work in the Pentagon recommending targets for the Iraq aerial war in 2003. But I didn't try to kill civilians; quite the opposite. I focused on military targets and tried my very best every day to minimize civilian casualties -- as required by the Geneva Conventions. But I have to live with the fact that, even so, many civilians died in those attacks.
If Ayers studied the laws of war he would know that they don't say civilians can never be killed in conflict; they require military forces to take constant care to spare civilians and civilian property, and never to place military advantage above excessive civilian damage. [emphasis added]

Garlasco knows what the Geneva Conventions say--and knows better than to apply them blindly when he is looking into the aftermath of an Israeli attack on Palestinian terrorists.
Whatever Garlasco may say about Israel's ability to protect civilians while eliminating terrorists, one thing is clear--Israel's record is better than Garlasco's. According to that 60 Minutes segment:

But he says none of the targets on the list were actually killed. Instead, he says, "a couple of hundred civilians at least" were killed.

I am not saying that even one of those civilian casualties is his responsibility, but I do believe that Garlasco's failures raises the question of just what is going through his mind when he is investigating Israel.
One thing is for certain, Garlasco does not have in mind staying with Human Rights Watch indefinitely. In September 2007, Garlasco--a collector of Nazi paraphernalia--wrote on the German Combat Awards Forum:

What complicates things is I have a public life too. I have been in film, TV, and there is talk of politics.

Marc Garlasco is a man with a lot on his mind.
UPDATE: And politics seems to still be one of them: 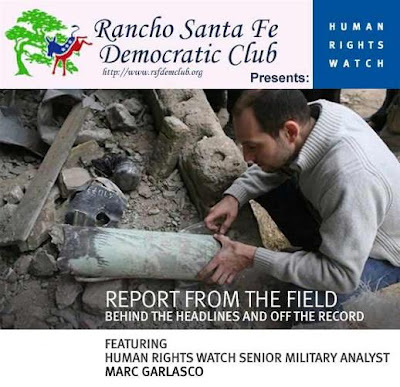 Do other HRW personnel do the circuit as well--other than in Saudi Arabia?

Hi there.
Does this blog belong to THE Dalet Amos?

The hypocrisy is unbelieveable. This interview should be posted every time HRW says Israel commits war crimes for being "disproportionate".

aren't you a famous witter or something???

You left out the best bit of the quote:

What complicates things is I have a public life too. I have been in film, TV, and there is talk of politics. [...] I will talk quietly to some at work that I trust - a small group indeed.

I am famous neither for my wit nor for what I write. :-)

Except perhaps to my family.

But thank you for the thought.

A very convenient typo indeed (damn that Google spellcheacker!). Your name simply sounds familiar but a can't put my finger on it. Ah well......
In any case, I think some blogs/ppl have missed the point of this whole affair by calling him a Nazi. Collecting Nazi war items a Nazi does not make. You just might even be able to explain away his cloths preferences too (just barely) as having to do with being a history buff which tend to be a bit weird regarding historical artifacts (although there isn't that much evidence that the guy collects them for historical reasons). This is all not the point. The point is that a professional unbiased HR organisation shouldn't hire such a man with such weird and borderline hobbies if it wants to keep the appearance of a professional and neutral HR organization. Or since it isn't expected to know exactly what it's workers hobbies are, to "investigate" the matter after it has been discovered.

People didn't call him a Nazi, it was the collectors forums and HRW itself that have been misconstruing the reports coming out of the JBlogosphere. After misrepresenting what is being said, they defend against the misrepresented arguments. It is called a straw-man argument.

Excellent research work, Daled Amos! I found you via Elder of Ziyon. I posted the report from CBS at Democratic Underground (under a different nic) just to mess with their heads :-), but I didn't credit you because I didn't want them to delete my post as coming from a "hate site" (their words for any pro-Israel site). My apologies. I felt it was more important for the message to remain and be read.

Can't thank you enough for ferreting out all this very important information - & I couldn't agree more with those who say these facts should be brought up every time this creep opens his mouth about Israel.