One would think that considering the controversy surrounding the Goldstone Commission Report to begin with, and the need for the semblance of objectivity, the commission would make sure to surround itself with only the most most objective and reputable witnesses. 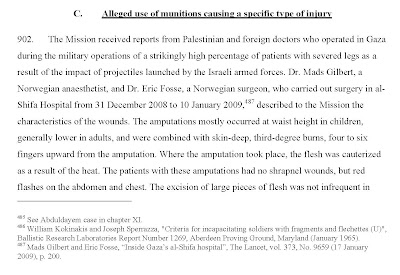 So just who is Mads Gilbert? According to CAMERA:

Gilbert is a radical Marxist and a member of the political Red (Rodt) party, a revolutionary socialist party in Norway. He has been a pro-Palestinian activist since the 1970's and travelled to Lebanon in support of the Palestinians during the first Lebanon war in 1982. He has long been a vocal opponent of Israel and the U.S. Gilbert has acknowledged that he cannot separate politics from medicine, stating, "there is little in medicine that is not politics." He even criticizes the group Doctors Without Borders for providing medical assistance to both sides in a conflict instead of taking a strong stance and supporting only one party. In a 2006 article in Nordlys, journalist Ivan Kristoffersen lamented the fact that Gilbert allows his humanitarian efforts to be politicized by his radical agenda.

In an interview with the Norwegian daily, Dagbladet, shortly after the attacks, Gilbert stated:

The attack on New York was not surprising, after the policy that has led the West in recent decades. I am upset over the terrorist attack, but am equally upset over the suffering which the United States has created. It is in this context that the 5000 dead people must be seen. If the U.S. government has a legitimate right to bomb and kill civilians in Iraq, then there is also a moral right to attack the United States with the weapons they had to create. Dead civilians are the same whether they are Americans, Palestinians or Iraqis.

When asked by Dagbladet if he supported the terrorist attack on the U.S., he replied:

Mads Gilbert is also the doctor who participated in an apparently faked attempt to save a child victim of an Israeli attack.

Little Green Footballs quotes a doctor who is suspicious of the video--which CNN originally featured, and then removed from their site without comment:

The chest compressions that were being performed at the beginning of this video were absolutely, positively fake. The large man in the white coat was NOT performing CPR on that child. He was just sort of tapping on the child’s sternum a little bit with his fingers. You can’t make blood flow like that. Furthermore, there’s no point in doing chest compressions if you’re not also ventilating the patient somehow. In this video, I can’t tell for sure if the patient has an endotracheal tube in place, but you can see that there is nobody bag-ventilating him (a bag is actually hanging by the head of the bed), and there is no ventilator attached to the patient. In a hospital, during a code on a ventilated patient, somebody would probably be bagging the patient during the chest compressions. And they also would have moved the bed away from the wall, so that somebody could get back there to intubate the patient and/or bag him. In short, the “resuscitation scene” at the beginning is fake, and it’s a pretty lame fake at that.

So the question is, were they re-enacting the resuscitation scene by repeating their actions on a corpse, because the child had died earlier? It’s likely that the answer is no, that child is still alive, and is just an actor pretending to be a child who was killed. Why do I say that? Because the big guy in the white coat, if he’s really a doctor, nurse, nurse’s aid, EMT, or any sort of health care provider at all would be entirely aware that tickling the boy’s sternum doesn’t really look like actual chest compressions. If the boy was dead, the man would have done a more convincing job in compressing the chest. The taps on the chest that he’s doing are the sort of thing you see in bad TV dramas, when you don’t want to make the poor actor playing the victim uncomfortable by really pushing on his chest. I think the man in the white coat knows this child is actually alive, and is making the simulated chest compressions gentle so as not to hurt the child. My guess is that he assumed the videographer, like those on better TV shows, would have been smart enough not to film as far down as the man’s hands on the chest.

Still, with all of that, Mads Gilbert makes a better witness in the Goldstone Commission Report than the source for Gazan casualties resulting from Israel using White Phospherous:

Is this the best that the Goldstone Commission can do--quoting anonymous sources?

The commission would have been better off if it had followed the advice offered by a group of Australian lawyers:
Here is what the lawyers had to say about the kinds of witnesses that generally can be used in reports from NGO's, using the US Court of Appeals as a guideline:

Here is more of that material in context, which has a closer parallel to Israel than is initially evident: In this case, 'M.A.' wants asylum from the US in order to get out of being returned to El Salvador and being forced to serve in the Salvadoran army:

M.A. claims that the military in which he might be forced to serve has committed acts that are contrary to the basic rules of human conduct. The Board was within its discretion in rejecting this claim based on M.A.'s failure to present cognizable evidence that the alleged atrocities he wanted to avoid were perpetrated as a result of the policies of the Salvadoran military or government. Misconduct by renegade military units is almost inevitable during times of war, especially revolutionary war, and a country as torn as El Salvador will predictably spawn more than its share of poignant incidents. Without a requirement that the violence be connected with official governmental policy, however, any male alien of draft age from just about any country experiencing civil strife could establish a well-founded fear of persecution. The Refugee Act does not reach this broadly. See Sanchez-Trujillo v. INS, 801 F.2d at 1577.

M.A. did, of course, bring forth evidence from prominent private organizations such as Amnesty International and Americas Watch. These organizations have condemned the Salvadoran military and security forces for committing violent acts against all sectors of Salvadoran society. They report that the Salvadoran military engages in "extrajudicial execution on noncombatant civilians, individual death squad-style killings, 'disappearances,' arbitrary detention and torture." Moreover, they contend that the military violence is carried out pursuant to a deliberate policy of the Salvadoran government designed to further that government's political interests.

The Board refused to recognize these private reports and instead suggested, consistent with the Handbook Sec. 171 (violent action must be "condemned by the international community as contrary to basic rules of human conduct"), that such condemnation must at a minimum come from "recognized international governmental bodies." Petitioner and amici argue, however, and the panel agreed, 858 F.2d at 218, not only that the atrocities need not be the policy of the Salvadoran government, but also that an alien need not wait for official condemnation by governmental bodies of any kind before the atrocities can be considered as the basis for a "well-founded fear."

We disagree. A standard of asylum eligibility based solely on pronouncements of private organizations or the news media is problematic almost to the point of being non-justiciable. Neither petitioner nor amici state the extent of general violence by military units needed to be reported by private groups in order to constitute "international condemnation." We do not know how courts are expected to evaluate the proffered explanations for various incidents of military activity or to gauge the extent to which such activity may or may not implicate official policies. We are also uncertain of the criteria by which courts would analyze the reports of private groups. Presumably, if any private organization condemns the acts of some members of the military in a country at war, these condemnations would serve as the basis for asylum eligibility. Although we do not wish to disparage the work of private investigative bodies in exposing inhumane practices, these organizations may have their own agendas and concerns, and their condemnations are virtually omnipresent. Taken alone, they do not suffice to overturn the Board's judgment in M.A.'s case.6 See Mendez-Efrain v. INS, 813 F.2d 279, 282 (9th Cir.1987) ("documentary evidence on the tragic and widespread danger of violence and human rights violations affecting all Salvadorans ... is not enough to establish persecution").

Now if we can only find out what precedents underlie the actions and judgements of the Goldstone Commission--and the witnesses it bases itself on.