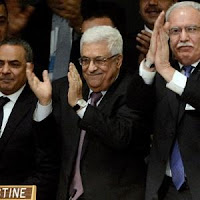 For example, if you look at the Wikipedia entry for Abu Mazen, you will find the following:

Actually, according to the Palestinian Constitution, neither Abbas nor Fayyad are in charge -- rather Hamas has a better claim to both positions.


Steven Rosen explains why Abbas's term as president of the Palestinian Authority ended in 2009:


Mahmoud Abbas is presenting himself as the president of the Palestine that is pressing the claim in the U.N. General Assembly, but he is not considered to be the president anymore by Hamas, the largest political party in the putative state. And Hamas has Palestine's own laws on its side in this dispute. Abbas was elected in 2005 to serve until January 2009, so his term has expired. In 2009, he unilaterally extended his term for another year until January 2010 (an extension that also has expired), but that extension did not adhere to Article 65 of the Palestinian constitution, the Basic Law. Hamas, which controls a majority in the now defunct Palestinian Legislative Council (PLC), opposed the extension. According to Article 65 of the Basic Law, the legally empowered president of Palestine, since January 2009, has been PLC Speaker Abdel Aziz Dweik, a deputy representing Hamas. Palestine's ruling party, Hamas, considers Dweik, not Abbas, to be the legal president of Palestine, and it has a strong case.

Going one step further, it turns out that according to the Palestinian constitution, Fayyad is not the prime minister either.


Hamas denies that Abbas has the authority to appoint Salam Fayyad as prime minister, because Abbas is not legally the president of Palestine under Article 65 and because Fayyad has not been empowered as prime minister by the Palestinian Legislative Council as required by Article 66 of the Basic Law. Neither his first appointment, on June 15, 2007, nor his reappointment on May 19, 2009, was confirmed by the PLC as required. Hamas, which controls the majority in the PLC, considers the legal prime minister of the Palestinian Authority to continue to be Ismail Haniyeh, a senior political leader of Hamas. Haniyeh was empowered by the PLC to be prime minister of Palestine in February 2006. Abbas dismissed Haniyeh from the office on June 14, 2007, after the Gaza coup, but Haniyeh counters that this decree violated articles 45, 78, and 83 and that he continues to exercise prime ministerial authority under Article 83. The PLC also continues to recognize Haniyeh's authority as prime minister. Here again, Hamas has the law on its side.

So you end up with the odd situation that despite the fact that Abbas has now been out of office as president of the Palestinian Authority for 4 years:
Nice work if you can get it.

It does however raise the question of just what kind of unity government Fatah and Hamas keep on talking about. After all, according to Hamas, Abbas is not president.

More to the point, it's not so clear the Palestinian Arabs themselves are so crazy about Abbas as president. The latest poll by the Palestinian Center for Policy and Survey Research during mid-December indicates that Haniyeh defeats Abbas in a presidential election:

If Abbas can barely eke out a win against Hamas even in the West Bank, then you know he is in trouble.

It makes one wonder whether a "unity" government is just a prelude to Hamas claiming what they see legally as being rightfully theirs.

If so, once they take over the West Bank, will Hamas thank the UN for giving recognition to their state?


Technorati Tag: Abbas and Gaza and Hamas and Palestinian Authority.