Video: Looks Like Hillary Doesn't Really Take Responsibility For The Benghazi Terrorist Attack After All

Despite Hillarycare, Whitewater, Travelgate, Filegate, the cattle-futures mess, the circumstances surrounding the 2000 Clinton pardons, “suspension of disbelief,” etc., Ms. Clinton, for not fully explained reasons, remains mostly beyond audit and censure, a fact she has come to appreciate.
Victor Davis Hanson, What Difference?


Back in October, Hillary claimed to take responsibility for the tragic -- and possibly avoidable -- terrorist attack that resulted in the death of 4 Americans, including the US Ambassador to Libya.

The unasked question was whether Clinton thought there should be actual consequences for the failure of the State Department to resolve security issues and see to the proper defense of Americans there.

Here is Hillary "taking responsibility" -- do you think she plans on accepting any consequences for the State Department's failure?


Now fast-forward to this week, and the Senate hearings on Benghazi.

You might take some comfort in the following clip from the tongue-lashing Senator Rand Paul gives Clinton. Paul makes it very clear he holds her responsibility for the State Department failures:

But then go to 5:10 of the video, where Clinton makes a point of her not being responsible:


The ARB (Accountibility Review Board) made very clear that the level of responsibility for the failures that they outlines was set at the Assistance Secretary level and below.

This brings us to the classic statement by Hillary Clinton that the causes of the terrorist attack that killed 4 Americans did not really matter.

Note that CNN already pointed out in October that Hillary was framing the questions of responsibility for Benghazi as political:


What I want to avoid is some kind of political gotcha or blame game.

Since we all assume that Hillary plans to run for president in 2016 -- the reason she paid her "dues" by claiming to take responsibility for Benghazi, in place of the White House -- the question is whether the Benghazi terrorist attack will haunt her.

If not, maybe Hillary's callous retort will: 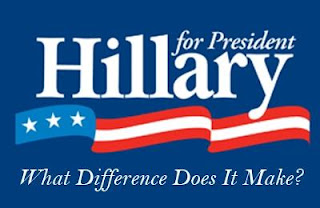 The Obama admin has never taken responsibility for the merest mistake or misstep or failure. Not a single one. This is what's behind the silly outburst of Clinton's anger. The admin truly believes it is outside the law and cannot and will not be questioned.