Arlene Kushner on Israeli and Palestinian Anger At EU Guidelines

Will the EU Reverse?

"I would expect those who truly want peace and stability in the region would discuss this issue after solving more urgent regional problems such as the civil war in Syria or Iran's race to achieve nuclear weapons. As the Prime Minister of Israel, I will not allow the hundreds of thousands of Israelis who live in Judea and Samaria, on the Golan Heights and in Jerusalem, our united capital, to be harmed. We will not accept any outside diktat about our borders. This issue will be decided only in direct negotiations between the sides."

In a subsequent interview, Netanyahu said more.  Calling the guidelines "wrong," he indicated that they were "an attempt to force on Israel the final borders through economic pressure rather than through negotiations.

"It hardens the Palestinian positions, it causes Israelis to lose confidence in the impartiality of Europe.  I think for years the Europeans have been whining about the fact that the Americans are not involved enough. Now that they are involved, this action actually undermines the American effort. It undermines the negotiations."

As to "European impartiality," don't worry, the prime minister knew exactly what he was saying.
Read: 'We will not accept any external dictates regarding our borders'
~~~~~~~~~~
Netanyahu has been calling his counterparts in various EU states today, urging that the new guidelines not be implemented.  The hook he is using is that the new EU policy will compromise efforts at restarting negotiations.  Undoubtedly he considers this is the best approach he has, the only one he thinks might succeed.
But Israel Hayom is reporting that Netanyahu is


"urging EU officials to defer implementing the decision...until after peace efforts between Israel and the Palestinians are exhausted." (Emphasis added)

Read: 'We won't accept foreign dictates over our borders'
And that causes a niggling unease.  It's quite likely that he assumes those attempts will drag on indefinitely, or that the situation will change by the time the US calls it quits, or that he'll deal with it when that happens.  But this argument carries the implication, however unintended, that once attempts to restart negotiations have failed, well, then it's OK for the EU to say they won't have any dealings with Israel past the Green Line.
Further clarifications will be needed.
~~~~~~~~~~
Israeli Foreign Ministry officials are saying that they were given only two days notice about this change in EU policy.  The accusation in some quarters is that the European Commission pushed this through with inordinate speed. This makes it sound as if it's on shaky ground, but there are conflicting reports on this.
~~~~~~~~~~
But we should also note this (emphasis added):

"A senior Palestinian Authority official confirmed to Israel Hayom on Tuesday that many in Ramallah were dissatisfied with the European Union's decision to withhold economic grants and incentives to Israeli companies situated in Judea and Samaria.

"'For our part, we approached a number of [European] Union officials, in the [Palestinian] Authority and also in Israel, to try and prevent the decision or at least to keep it unofficial,' said the official, who declined to give his name. 'It's not just Israeli companies that are going to be hit economically, it's also going to be disastrous economically and socially for the Palestinian community.'"

"According to the Palestinian official, the European move will freeze joint projects, force employers to stop hiring Palestinians to work on joint projects with Israelis and lead to widespread layoffs of Palestinians laborers working in Judea and Samaria industrial zones.

"Sammer Darawsha, who works in a hothouse that is a part of a joint Israeli-Palestinian agricultural project funded by members of the EU and situated near the Halamish settlement, said the decision will 'affect everyone, whether Jew or Palestinian. If they take away our livelihoods and food, exactly what kind of peace will be here?'"

Read: PA Offical: EU Judea and Samaria Guidelines Harm Palestinians
And this, my friends, is what is most likely to effect a pullback in the EU policy stance.  We don't matter to the Europeans. But hurt Palestinian Arabs?  That's a whole other kettle of fish.
~~~~~~~~~~
I rather like what AFSI (Americans for a Safe Israel) had to say about the EU guidelines:

"These are the new Nuremberg Laws. Europe has once again shown its virulent anti-Semitism, and it is urgent that Israel not capitulate...We, as Americans, can re-invigorate our BUY ISRAEL programs, concentrating on products like AHAVA and SODA-STREAM that come from the controversial areas.  Let's remind the world of the great contributions Israel has made to our computerized world today, as well as to the remarkable advances in medicine and in every field one examines. Perhaps Israel should threaten to withhold all its research and development discoveries from the EU. There would be an uproar from the populace."

~~~~~~~~~~
I will add here, before turning away from the EU, that it has staunchly resisted all appeals to list Hezbollah as a terrorist organization.  This, perhaps, tells us all we need to know.
~~~~~~~~~~
It's a long standing outrage and the situation must improve:
Jews are barely tolerated on the Temple Mount, the holiest place in Judaism.  The hours during which they can ascend are limited and they are forbidden to pray.
Every time there is "unrest" exhibited by the Muslims on the Mount -- or a threat of unrest, Jews are moved out so as to avoid confrontation.  This is an easier solution for the Israeli police than trying to control Muslim mobs. Never mind that Jewish rights are subverted in the process.
~~~~~~~~~~
At any time, this is a deeply distressing, an unacceptable, situation. But this was particularly the case yesterday: For it was Tisha B'Av, the day of mourning for the destruction of the Temple.
Israeli authorities decided to ban entry to the Mount by Jews because of fear of Muslim rioting. Hundreds of Jews, who had come -- some from a considerable distance -- in order to enter the Mount in commemoration of the day, were prevented from doing so. The day prior there had been trouble on the Mount and the police were eager to avoid a repeat.
And so the terrorists have been winning -- they act up, and keep the Jews out.  An extraordinarily perverse situation that threatens Israeli sovereignty.
See the story here: Tisha B'Av: Jews Banned from Temple Mount
~~~~~~~~~~
But there is good news with regard to this situation, too, as Jewish consciousness is being raised regarding Jewish rights, and more people are speaking out.
We see members of the Knesset and government ministers getting involved.   Members of Knesset Shuli Mualem-Rafaeli (HaBayit HaYehudi) and Deputy Foreign Minister Ze'ev Elkin (Likud). were there yesterday and among those turned away.
MK Moshe Feiglin (Likud) has long been a fighter for Jewish rights on the Mount. See the story of the storm that erupted in the Knesset today about what happened on Tisha B'Av and Feiglin's role in it:

Read: MK Feiglin to Minister: Admit You Fear the Waqf
You can see Feiglin on one of his visits to the Mount here: 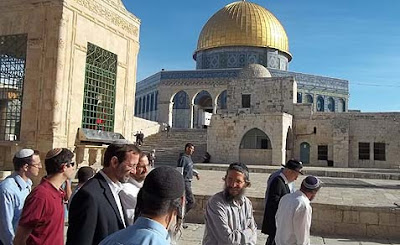 Credit: Jewishpress
~~~~~~~~~~
Deputy Defense Minister Danny Danon (Likud) has begun an even more significant fight.  Not only must Jews be allowed up on the Mount, he say, they must have an equal right to pray there.

“We are in favor of freedom of religion on the Temple Mount, and that means freedom for all religions. That includes Jews."

It cannot continue any longer, that Arabs riot whenever a Jew begins to pray, he said.

Read: Danon: Equal Prayer Rights on Temple Mount Now
~~~~~~~~~~
Well, it's an important start, and bravo! to all those taking on this fight.
We can all play a role: When you come to Jerusalem, arrange to visit the Mount with a guide. We need to see more Jews up there.
~~~~~~~~~~
Do I have this correct:  I'm reading now that Kerry, who met Abbas in Amman, will not be coming to Jerusalem this time around, after all.
What this tells us is that he did not make sufficient progress with Abbas so that he has anything to bring to Netanyahu.
Do you want to know how bad it is?  Instead of pulling back on its demands, the PA has just added new ones.  Abbas wants permission granted to build an airport in Ramallah, and to build hotels on the edge of the Dead Sea in Area C.  This before coming to the table. Oh, and permission to search for gas in the territorial waters off of Gaza.

Read: New Palestinian precondition: Airport in Ramallah
No wonder Kerry is not coming.  How could he face us with all of those requests?
~~~~~~~~~~
But never mind, Kerry is insisting that he's "narrowing the gaps between Israel and the PA."  And he met with representatives of the Arab League in Jordan, who have endorsed Kerry's efforts.
Said the secretary of state:

“Israel needs to look hard at this initiative, which promises Israel peace with 22 Arab nations and 35 Muslim nations – a total of 57 nations that are standing and waiting for the possibility of making peace with Israel."

Read: Kerry says gaps narrowing between Israel and Palestinians
"standing and waiting for the possibility of making peace with Israel."  The man's a clown.  Those Muslim nations are "standing and waiting" for a chance to destroy Israel via diplomatic game-playing. Is this Kerry's "new" initiative?
~~~~~~~~~~
© Arlene Kushner. This material is produced by Arlene Kushner, functioning as an independent journalist. Permission is granted for it to be reproduced only with proper attribution.
If it is reproduced and emphasis is added, the fact that it has been added must be noted.


Technorati Tag: Israel and EU and West Bank and Abbas