B'Tselem has written urgently to the Legal Adviser in Judea and Samaria, demanding his response to a grave incident in which soldiers detained a five-year-old boy in Hebron for two hours, after he threw a stone. The soldiers threatened the child and his parents, handcuffed and blindfolded the father, and handed the boy over to the Palestinian Police. Detaining a child below the age of criminal responsibility, especially one so young, has no legal justification.

Detaining a child who throws rocks at car driving by has no justification?

After all, a recent victim of Palestinian rock throwing is Adelle Biton:


Three-year-old Adelle Biton, who was critically wounded in a rock terror attack in Samaria in March, was allowed to be temporarily discharged from the hospital on Friday so she can spend the weekend at home with her family.

Adelle was transferred in May to the Beit Levinstein Hospital for rehabilitation after being in critical condition for 2.5 months. 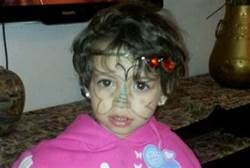 
A couple of days ago, a five year old Palestinian Arab boy who was throwing rocks at cars received a great deal of media attention. That is because he was picked up by the IDF, and brought to his parents, and they were then brought to PA police.

The so-called human rights NGO, B'tselem, caught part of this on video and put it out, protesting that it is against the law to arrest a minor. Oh, those big bad Israelis.

But the child wasn't arrested. And wasn't charged. What is more -- and this is visible on the video -- he was accompanied by an older Arab boy, presumably, a relative, who held his hand.
It is quite true that he was frightened at first, and crying. And you know what? When I saw the video, my thought was, Good! If he is frightened of Israeli authorities maybe he'll think twice about throwing rocks again. Maybe he would have caused damage, had he continued, and maybe not. And if not, maybe when he grew to be seven or eight, his arm would be stronger and he'd be more likely to cause damage to innocent Israelis.

The earlier the lesson is learned, the better. And the further the word gets out in the Palestinian Arab community that the IDF is taking this seriously now, also the better. It has become the "thing" to do, which is why there is a five year old engaged in rock throwing.

For too long the throwing of rocks, which can kill, by "children," had been brushed off as nothing serious. And so there has been a rash of rock-throwing incidents -- sometimes causing injuries and damage to vehicles -- which is now being reduced because of a different IDF approach.

Here is a video response by Danny Ayalon to B'Tselem's biased attack on the IDF:


It is particularly troubling that none of them apparently thought any part of the incident was problematic: not the fact that they scared a five-year-old boy out of his wits, nor threatening him and his parents to "hand him over" to the Palestinian Police, nor threatening to arrest the father on no legal grounds, nor handcuffing and blindfolding the father in front of his son.

In the context of the damage and injuries caused by Arab rock-throwing, Montell's obtuseness is nothing less than breathtaking. She denies the right to prevent disorder, violence, damage and worse caused by this increasing danger.

As I've mentioned before in this blog, in Jews and Arabs: Their Contacts Through the Ages, S. D. Goitein wrote in 1955:


Too bad B'Tselem was not in existence to defend Muslims throwing rocks at Jews back then.

UPDATE: A post on the IDF blog from this past March: Rocks Can Kill

Last Thursday, a woman was driving past the city of Ariel with her three young daughters in the car. At the same time, a group of Palestinians threw rocks at a truck coming in the other direction. The truck veered off its lane, and collided with the family’s car, causing moderate injuries to the mother and to the two older daughters. The youngest, a three-year-old child, was critically injured, and rushed to the nearest hospital. Doctors are working tirelessly to save her life.

Rock throwing is common in Judea and Samaria, and along with Molotov Cocktail and booby-trapped tire throwing, is a terror act that comes under the definition of ‘popular terror’. These incidents happen daily, and are easily ignored by the mainstream media, because they don’t seem that serious. But did you know that a simple rock can kill?

Killed by a rock thrown at her car while driving near the Palestinian village Dahariya, on her way from Be’er Sheva to Jerusalem. The rock hit her head and put her in a coma. On February 12, after two weeks in a vegetative state, she passed away.

Killed when he was struck in the head by a concrete block in Nablus.

Killed during the second Intifada by rocks thrown at his vehicle while he was travelling from Haifa to Rishon Lezion. The rocks shattered the windshield and struck his chest. His brother, who was driving the car, sped to the hospital but was too late. The perpetrators were found to be from the nearby Arab village Jisar a-Zarka.

Were beaten to death with rocks when they were hiking in the outskirts of their village, Tekoa, in Judea and Samaria. Their bodies were found in a cave, covered with stones. The perpetrators have still not been found.

Died of his wounds after rocks were thrown at his parents’ car while driving near the Palestinian village of Isawiya. The family was returning from relatives at Ra’anana to their house in Shiloh, when a Palestinian threw a rock at the front windshield, went through, and hit the baby in the back seat.

Killed when their car veered and crashed into a tunnel after rocks were thrown at their front windshield while driving near Kiryat Arba. Later on, two Palestinians from the nearby village of Halhul admitted to instigating the attack.
The Judea and Samaria region has already seen 1,195 rock throwing incidents in 2013 alone.
In 1999, the Tel Aviv District Court ruled that damage caused by rocks thrown at a vehicle is considered a hate crime, not a traffic accident. Rock throwing may seem harmless, but rocks can kill. If we ignore rock throwing, we potentially encourage even more severe hate crimes and higher-scale terror attacks.

Email ThisBlogThis!Share to TwitterShare to FacebookShare to Pinterest
Labels: B'Tselem