Daniel Pipes on The Likely Doom of Islamism

by Daniel Pipes
The Washington Times
July 22, 2013
http://www.danielpipes.org/13124/islamism-doom
As recently as 2012, it appeared that Islamists could overcome their many internal dissimilarities – sectarian (Sunni, Shi'ite), political (monarchical, republican), tactical (political, violent), or attitudes toward modernity (Salafi, Muslim Brotherhood) – and cooperate. In Tunisia, for example, Salafis and the Muslim Brotherhood (MB) types found common ground. Differences between all these groups were real but secondary, as I put it then, because "all Islamists pull in the same direction, toward the full and severe application of Islamic law (the Shari'a)."
This sort of cooperation still persists in small ways, as shown by a recent meeting between a member of Turkey's ruling party and the head of a Salafi organization in Germany. But Islamists have in recent months abruptly and overwhelmingly thrown themselves at each others' throats. Islamists still constitute a single movement who share similar supremacist and utopian goals, but they also have different personnel, ethnic affiliations, methods, and philosophies.


Islamist internecine hostilities have flared up in many other Muslim-majority countries. Sunni vs Shi'i tensions can be seen in Turkey vs Iran, also due to different approaches to Islamism; in Lebanon, where it's Sunni vs Shi'ite Islamists and Sunni Islamists vs the army; Sunnivs Shi'ite Islamists in Syria; Sunni vs Shi'ite Islamists in Iraq; Sunni Islamists vs Shi'ites in Egypt; and Houthis vsSalafis in Yemen.
More often, however, members of the same sect fight each other: Khamene'i vs Ahmedinejad in Iran; the AKP vs the Gülenists in Turkey; Asa'ib Ahl al-Haq vs Muqtada al-Sadr in Iraq; monarchy vs the MB in Saudi Arabia; Islamic Liberation Front vs the Nusra Front in Syria; Egypt's MB vs Hamas regarding hostilities toward Israel; MB vs the Salafis in Egypt; and a clash of two leading ideologues and politicians, Omar al-Bashir vs Hassan al-Turabi, in the Sudan. In Tunisia, the Salafis (called Ansar al-Sharia) are fighting the MB-style organization (called Ennahda).

Seemingly minor differences can take on a complex quality. Just try to follow a Beirut newspaper's arcane account of hostilities in the northern Lebanese town of Tripoli:

Clashes between the various Islamist groups in Tripoli, divided between the March 8 and March 14 political movements, are on the rise. … Since the assassination of March 14 figure and intelligence chief Brig. Gen. Wissam al-Hasan in October, disputes between Islamist groups in Tripoli have been heading toward a major conflagration, particularly following the killing of Sheikh Abdel-Razzaq Asmar, an official from the Islamic Tawhid Movement, just hours after Hasan's death. The sheikh was shot dead … during an armed clash that erupted when supporters of Kanaan Naji, an independent Islamist figure associated with the National Islamist Gathering, attempted to take over the headquarters of the Islamic Tawhid Movement.

This pattern of fracturing brings to mind the 1950s divisions of pan-Arab nationalists. They aspired to unify all Arabic-speaking peoples, as the expression then went, "From the [Atlantic] ocean to the [Persian] gulf." However appealing the dream, its leaders fell out as the movement grew in power, dooming pan-Arab nationalism to the point that it eventually collapsed under the weight of kaleidoscopic and ever-more minute clashes. These included:
And so on. In fact, every effort at forming an Arab union failed – in particular the United Arab Republic between Egypt and Syria (1958-61) but also lesser attempts such as the Arab Federation (1958), the United Arab States (1958-61), the Federation of Arab Republics (1972-77), the Syrian domination of Lebanon (1976-2005), and the Iraqi annexation of Kuwait (1990-91).

Reflecting deep Middle East patterns, dissension among Islamists likewise prevents them from working together. As the movement surges, as its members approach power and actually rule, its cracks become increasingly divisive. Rivalries papered over when Islamists languish in the opposition emerge when they wield power.
Should the fissiparous tendency hold, the Islamist movement is doomed, like fascism and communism, to be no more than a civilizational threat inflicting immense damage but never prevailing. This possible limit on Islamist power, which became visible only in 2013, offers grounds for optimism but not for complacency. Even if things look brighter than a year ago, trends can quickly turn around again. The long and difficult job of defeating Islamism remains ahead. 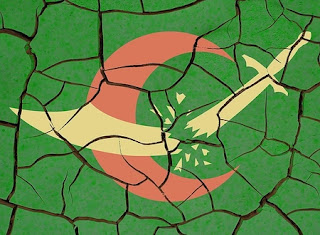 Mr. Pipes (DanielPipes.org) is president of the Middle East Forum. © 2013 by Daniel Pipes. All rights reserved.