Motzei Shabbat (after Shabbat)
According to the Times of Israel tonight (emphasis added):

"Minister Benjamin Netanyahu is reportedly to launch a new, last-ditch effort in the next few days to persuade the United States to credibly revive the military option against Iran.

"If this proves unsuccessful, Channel 2 reported, Netanyahu will have to decide whether to launch an attack on Iran’s nuclear facilities by this winter at latest, because after that, the report indicated, the assessment is that Israel’s window for military intervention will close."


"Israel's window," refers to the capability we have with our armaments to hit Iran's nuclear facilities, which are going way underground.  The US capability in this regard -- with its 30,000 lb bunker buster -- is greater.  Even if Iran has not quite reached that nuclear break-out, Israel may not be able to wait any longer, if there is a decision that the US won't act and we should.

"Israel desperately wants to see the Obama Administration harden its position on Iran immediately — to convey to Iran that if it does not halt its nuclear program, its regime will not survive. Instead, however, Jerusalem sees what it considers an overly tolerant and patient attitude by Washington DC to Tehran, the channel 2 report said.

"Next week, the P5+1 powers — the five UN Security Council members, plus Germany — are set to meet to coordinate positions ahead of possible talks with incoming Iranian President Hasan Rohani's leadership. The fear in Jerusalem, the TV report said, is that Iran will prove capable of buying more time in such talks, while its centrifuges spin, its other nuclear facilities move forward, and it becomes too late for effective military intervention.

"Netanyahu is about to begin a new effort at 'public diplomacy,' aimed at securing 'increased pressure on Iran,' led by the US, notably including the revival of 'a real military threat' if the Iranians don’t halt their nuclear drive, the TV report said.

"If the prime minister’s effort fails, 'Netanyahu will have to make a decision in the next few months' over 'whether to attack Iran by the winter.' The report stressed considerable support for a resort to military force within the cabinet, and concluded: 'This could happen.'"

Read: PM to push US for ‘more credible military option’ on Iran
~~~~~~~~~~
My friends, as I see it, this trumps the other security-related issues -- as serious as they are -- that we've been tracking.  With the turmoil in Egypt, and Syria, etc., the issue of a nuclear Iran sometimes seems to slip off the radar screen.  But it never should.
There has been a lot of talk lately about whether Netanyahu is sliding "left." Whether he really wants to reach a deal with the PA, etc.  And there's a tendency in many quarters -- not without reason -- to feel discontent with his leadership.
And yet... yet...on the issue of Iran his leadership is superb and I salute him.  He stands alone, facing an array of world "leaders" who opt for a dangerous and mindless oblivion on this issue.  An incredibly difficult place to be.
~~~~~~~~~~
It is not for me to say whether Netanyahu will decide to hit Iran, in the end.  But I make these observations here:
Surely, he believes that his efforts to get Obama to take a genuinely tough stand on Iran are almost certain to fail.  Nothing in Obama's behaviors and policies -- his entire MO -- would lead to any other expectation.
It is my assumption that Netanyahu will try one last time so that, should he decide to hit Iran, he will be able to face down world leaders and remind them that he did his absolute best to secure a serious counter to Iran without Israel having to go to war.  He's putting it back on the US, and the world, this one last time.
(There is, I suppose, a remote chance that once Obama sees that Netanyahu is serious and the day of reckoning is near, he might change his position. But I very much doubt it.)
I alluded yesterday to the interview outgoing Israeli ambassador to the US, Michael Oren, gave.  One of the things he spoke about, with regard to Iran, was Israel's need, as a sovereign state, to be responsible for her own security.  Oren didn't say this without a sign-off from the prime minister.  Oren was delivering notice.
I am pleased, and not surprised, to read here that there is considerable support in the Cabinet for an attack.  And I wonder if internally matters had to coalesce to a certain point for this to come together.
~~~~~~~~~~
The Times of Israel article refers to the potential repercussions of an attack on Iran, such as war with Hezbollah.  This is, of course, a possibility, and not to be taken lightly.
It is clear that all necessary preparations for such a war would be taken before Iran were hit. And our military leaders have served notice over and over: This next war would be different from the previous wars -- we would react with full force.  Translation: We know that Hezbollah has hidden its rockets in civilian areas, and Hezbollah will bear responsibility for this. We will take out rocket storage sites and launching sites with maximum speed to prevent injury to the Israeli population.  Hezbollah's capacity to attack would be as thoroughly and speedily immobilized as possible.
But in the end it may be that threats by Nasrallah are just bombast at this point.  Hezbollah is thoroughly enmeshed in the Syrian civil war, has taken a beating there -- with many fighters lost, is already facing anger from other Lebanese, and may be in no mood to take on Israel at Iran's instructions.  Hezbollah leaders are already irked at Iran for the responsibility placed on them to help Assad.
And so, it could be that from this perspective, this is the time to hit Iran.
~~~~~~~~~~
Having said all of this, let me totally switch gears and share news sure to bring a smile.
Remember Adelle Biton, the little girl -- now three -- who was critically injured in March when rocks were thrown at her mother's car?  One hit her head directly and she was rendered unconscious for an extended period of time.  Her family sat by her bedside constantly praying and talking to her -- always expressing hope for the future.  Her mother, Adva, is a woman of enormous spiritual strength.
After two and a half months in intensive care, Adelle regained consciousness and was moved to a rehabilitation facility in May.  Now she received a temporary discharge to spend a Shabbat with her family.  It was felt that this would be good for her recovery; she was released in a wheel chair.
Her mother, speaking to Israel Hayom, said:
"I can say that there is a difference of 180 degrees between now and our situation four months ago when Adelle was in intensive care. Adelle is now moving her limbs, moving her head, her eyes. There is certainly still a long road ahead of us, and G-d’s ways are mysterious with what he plans for us, but we are seeing a trend of improvement all the time.
"Every day we see miracles, miracles of miracles." 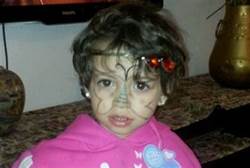 Credit: Biton family
~~~~~~~~~~
This, above, is the perfect segue for something I had already decided to write about before I even received the latest information about Adelle.
A couple of days ago, a five year old Palestinian Arab boy who was throwing rocks at cars received a great deal of media attention. That is because he was picked up by the IDF, and brought to his parents, and they were then brought to PA police.
The so-called human rights NGO, B'tselem, caught part of this on video and put it out, protesting that it is against the law to arrest a minor.  Oh, those big bad Israelis.
But the child wasn't arrested.  And wasn't charged.  What is more -- and this is visible on the video -- he was accompanied by an older Arab boy, presumably, a relative, who held his hand.
It is quite true that he was frightened at first, and crying. And you know what? When I saw the video, my thought was, Good!  If he is frightened of Israeli authorities maybe he'll think twice about throwing rocks again.  Maybe he would have caused damage, had he continued, and maybe not. And if not, maybe when he grew to be seven or eight, his arm would be stronger and he'd be more likely to cause damage to innocent Israelis.
The earlier the lesson is learned, the better.  And the further the word gets out in the Palestinian Arab community that the IDF is taking this seriously now, also the better.  It has become the "thing" to do, which is why there is a five year old engaged in rock throwing.
For too long the throwing of rocks, which can kill, by "children," had been brushed off as nothing serious. And so there has been a rash of rock-throwing incidents -- sometimes causing injuries and damage to vehicles -- which is now being reduced because of a different IDF approach.
See here: IDF Commander: 'Yesha Much Safer Now'
~~~~~~~~~~
The Islamic Movement of Israel, northern branch, held a rally of 2,000 people today in support of Morsi in the Arab town of Kafr Kanna.  They declared themselves ready to give their lives for Morsi, actually -- which I take as over-inflated rhetoric and no more.
The leader of this movement, Sheikh Raed Salah, is really bad news.
What amused me is the charge of the crowd -- as reported by YNet -- that America had responsibility for Morsi's fall.

Read: Arab-Israelis: 'We'll give our lives for Morsi'
Rather incredible, considering what Obama's position has been.  Some days you can't win.  But there's a cardinal lesson here: radical Islamists are anti-Western.  Period.  Don't bother them with the facts.
~~~~~~~~~~
Meanwhile, the Egyptian public prosecutor has announced the opening of a criminal investigation because of charges leveled against Morsi regarding spying, inciting violence, and more.  Charges are likely to follow.  I will be quite astonished if they do not.
~~~~~~~~~~
In Syria, there have been clashes in the north between various rebel groups -- the Free Syrian Army (FSA) and an al-Qaeda-affiliated jihadist group known as the Islamic State of Iraq and Syria (ISIS).  While the FSA is focused on the nationalist goal of taking down Assad, ISIS is promoting such Islamic goals as the imposition of sharia law and taking on enemies of Islam, including Israel.
According to one report, "dozens" of FSA fighters were killed recently by ISIS, after which the FSA battalion chief was beheaded.

Read: Syria: Clashes Escalate Between Free Syrian Army, Al Qaeda
Incredible.
But please note, "SIS fighters attempted to seize weapons from a local FSA battalion."
~~~~~~~~~~
So, is Obama not aware of this, or does he not care?
Yesterday, in a phone call with Saudi Arabia's King Abdullah, it is reported by Reuters, the president assured him that he is still committed to sending arms to the rebels.
(As I reported recently), the deployment of these weapons has been held up by members of Congress afraid that they might end of in the hands of Islamists.  A good call.

Read: Obama emphasizes US commitment to Syrian rebels
Maybe Obama doesn't want to be bothered with the facts either.
~~~~~~~~~~
© Arlene Kushner. This material is produced by Arlene Kushner, functioning as an independent journalist. Permission is granted for it to be reproduced only with proper attribution.
If it is reproduced and emphasis is added, the fact that it has been added must be noted.


Technorati Tag: Iran and Syria and Egypt and Netanyahu.