Defeating Islamists: Breaking Them or Taming Them?

The following by Daniel Pipes is reposted here by permission:

What to Want in Egypt

In the aftermath of the coup d'état in Egypt, a consensus has emerged, to cite an anonymous Obama administration official, that "Trying to break the neck of the [Muslim] Brotherhood is not going to be good for Egypt or for the region."

The thinking behind this view is that (1) it's better to have Islamists in the political process than violently rebelling and (2) participating in civil society has the potential to tame Islamists, making them see the benefits of democracy and turning them into just another interest group.


May I vociferously disagree? 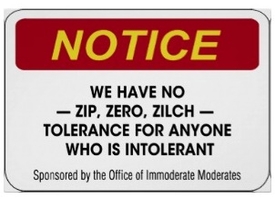 Yes, we do indeed want to break the brotherhood's neck because that is good for Egypt, the region, and (not least) ourselves. Both the above assumptions are wrong. (1) Islamists can do more damage within the political process than outside it. To put it graphically, I worry more about a Turkey, with elected Islamists in charge, than Syria, where they are engaged in a civil war to attain power. (2) Islamists have a history of using the political process for their own ends, and not of being tamed by it: see Mohamed Morsi's year in power for one clear example.

No tolerance for the intolerant. Just as fascists and communists are not legitimate players in a democracy, neither are Islamists. No matter how smooth talking, they remain autocrats who disregard the popular will. Better that they be excluded entirely from participatory politics. (July 29, 2013)