Hold Fast to the Hope

With all that remains disturbing (and I'll get to it), there are also good things happening within the government and the Knesset.  Good people who are ready to fight for Jewish rights.
Yesterday, during an AFSI reception at the Knesset, Deputy Minister of Transportation Tzipi Hotovely (Likud) shared her intentions to fight for the right of Jews to pray on Har Habayit (the Temple Mount).
While at a celebratory plenum session of the Knesset, Speaker of the Knesset Yuli Edelstein (Likud) expressed the hope that the issue of Jewish prayer on Har Habayit would be resolved by the next Yom Yerushalayim:

"All of us must make sure that the city of three religions, which we are proud of for having freedom of worship, should be open to every Jew in every place that they want to pray."

And the Knesset Internal Affairs Committee held a special meeting about Har Habayit in honor of Yom Yerushalayim.  Elhanan Glatt, director general of the Ministry of Religious Services, told the Committee that his office was examining ways to arrange for Jewish prayer on Har Habayit. 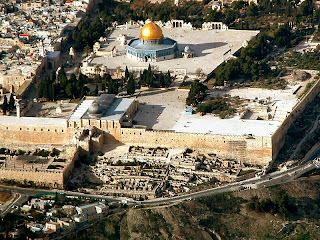 Credit: Bibleplaces
~~~~~~~~~~
Yes, and yes!  Jewish prayer on Har Habayit. Enough voices speaking out so that one begins to hope that maybe, maybe at long last there will be action.
It's such a no-brainer -- that Jews should be able to pray at the place that is holiest for them, the site of the Temples.  And an outrage of such immense proportions that we Jews cannot pray there.
~~~~~~~~~~
There is, of course, a convoluted history to this situation, as there often is with what goes on here.  No matter what their claims, the issue for Muslims regarding Jewish prayer on Har Habayit is political and not religious.
If Israel were not a power with which they contend, you think they'd care if Jews prayed there?  For a long time, before Israel liberated Har Habayit, the Muslims paid it little heed.  Their holiest city is Mecca, with Medina second.  But let Jews have it?? Never.
Perhaps the comment by MK Ibrahim Sasour (United Arab List -Ta'al) during yesterday's Knesset Internal Affairs Committee meeting says it all:

"Jews in Israel need to understand that one day Jerusalem will return to Palestinians and Muslims.  The solution is to maintain the status quo."

"The Wakf's problem isn't prayer, but the sovereign symbolism of prayer.  As far as they are concerned, [Jewish prayer] eats away at the total Muslim rule over the Temple Mount."  (Wakf = Islamic trust, an administrative body)


The Defense Ministry on Wednesday approved for deposit plans for the construction of 296 homes in the West Bank settlement of Beit El with the Higher Planning Council of Judea and Samaria.

The Civil Administration must now advertise the plans in a newspaper, after which begins a 60-day period for the public to register objections, before the plans receive final approval from the council...

"Prime Minister Binyamin Netanyahu promised to build the homes in June, as part of a deal reached with 33 families living in the Ulpana outpost located at the outskirts of the settlement, whose homes were slated for demolition as the result of a High Court of Justice ruling.

"The settlers agreed to leave their homes without physical resistance, in exchange for a pledge by government officials to build 296 new homes."

Read: Plans deposited for 296 new homes in Beit El settlement
Defense Minister Moshe Ya'alon will have to sign off on this, but I do not anticipate this as a problem.
~~~~~~~~~~
This news about building follows other news of 90 units in Beit El that have been fully cleared for construction.  This is also part of the Ulpana compensation package.
~~~~~~~~~~
I really don't want to make too much of Steven Hawking's decision to boycott Israel. But this information is worth sharing:

“Hawking’s decision to join the boycott of Israel is quite hypocritical for an individual who prides himself on his whole intellectual accomplishment. His whole computer-based communications system runs on a chip designed by Israel’s Intel team. I suggest if he truly wants to pull out of Israel he should also pull out his Intel Core i7 from his tablet,” said Nitsana Darshan-Leitner of Shurat HaDin, an Israeli law center that represents victims of terrorism.

"Hawking, 71, has suffered from motor neuron disease for the past 50 years, and relies on a computer-based system to communicate." Darshan-Leitner says the equipment has been supplied by Intel in Israel since 1997.

Read: Hypocritical Hawking Boycotts Israel But Depends On Israeli Technology
~~~~~~~~~~
© Arlene Kushner. This material is produced by Arlene Kushner, functioning as an independent journalist. Permission is granted for it to be reproduced only with proper attribution.
If it is reproduced and emphasis is added, the fact that it has been added must be noted.