In Saudi Arabia, the government has started an advertising campaign to combat the problem of domestic abuse of women: 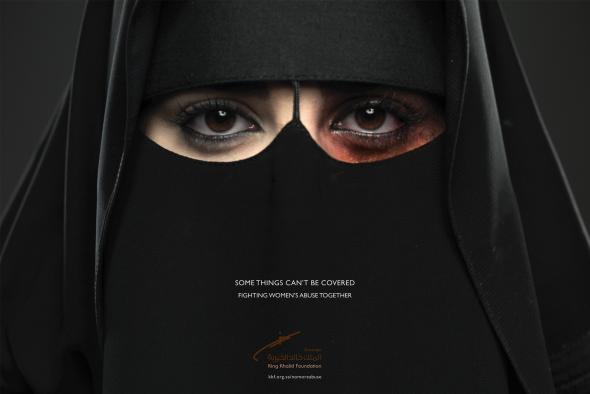 
Saudi Arabia, a country where women still are not permitted to drive by themselves, has launched a provocative new anti-domestic abuse campaign.

The startling ad shows a Saudi woman in a typical veil sporting a black eye. Underneath the photo, a caption reads: “Some things can’t be covered; Fighting women's abuse together."

The campaign, funded by the King Khalid Foundation, aims to provide legal protection for women and children victims of abuse in Saudi Arabia, and is encouraging Saudis to report cases of domestic violence to nearby help centers.

The article goes on to describe criticisms of the ad and gives a broader background on the kinds of problems and restrictions that women face in Saudi Arabia:
Of course, the ad itself is no good if it is not in Arabic. The fact that the ad by Memac Ogilvy is in English as well as Arabic may point to the fact that the Saudi's are as interested in changing their image outside of their country as they are in addressing the problem of domestic abuse inside it.

The blog FITNAH Movement for Women's Liberation notes A Saudi advertising campaign is not enough:


Monica Lanfranco has written an article in Italy's Il Fatto Quotidiano on the first Saudi campaign against domestic violence here.

A poster of the educational campaign can be seen on the left.

In the article she quotes Fitnah's Maryam Namazie saying:


"This anti-violence campaign in Saudi Arabia is clearly in response to the public outrage over the death of 5 year old Lama after facing horrendous and unspeakable tortures at the hands of her father, who was effectively let go. Any move to highlight domestic violence is hugely important but the problem is not just a matter of education and raising awareness. Stopping domestic violence has to start with changes in the law that criminalises it and prosecutes abusers. Under Sharia law, however, violence against women and children is often seen to be the prerogative of the male guardian as Lama’s case highlights.

"The Saudi Government wants to be seen to be making an effort against violence in the face of public outrage. The first perpetrator of violence in Saudi society though is the regime itself and its medieval laws. The best way to begin to end violence against women and children is to end the implementation of Sharia law - not an advertising campaign."

Clearly the Saudi ad is a first step -- but it is only the first of many.
And if the Saudi Arabian government does not follow up on this, the ad will merely serve as a reminder of the lack of Saudi commitment to deal with their problem of domestic abuse.