Strong for All Things

There are multiple ways in which enormous strength is required of the Israeli government now.  In no situation is this more the case than with regard to Syria and armaments shipped there, either for use by Syria or for transfer to Hezbollah in Lebanon.
The situation is rife with threats, claims, charges, counter-charges, and rumors.
What seems to be the case is that Russia recently shipped its Yakhont anti-ship cruise missiles to Syria.  And this is bad news:

"They are hard to detect and ever harder to shoot down or decoy away, so they're a powerful tool for keeping warships a long way off the Syrian shore."

Russia had previously supplied Assad with Yakhont missiles in 2011, but they were an earlier, less accurate model.
Read: US: Russian missiles could embolden Assad 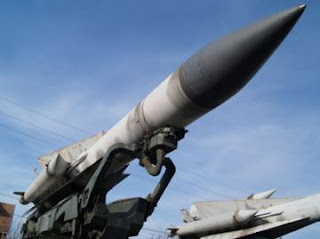 Credit: Oratert
~~~~~~~~~~
A big question that hangs over this is whether Syria will attempt to transfer those Yakhont missiles to Hezbollah, which could use them to threaten Israeli ships and the Israeli gas fields in the Mediterranean -- which would just about be in reach.
It is exceedingly unlikely that Israel would sit still for such a transfer of weaponry.  Last Thursday night, CIA chief John Brennan flew into Israel unannounced to consult with Defense Minister Moshe Ya'alon about the escalating situation in Syria.  Ya'alon made it clear that Israel had no intention of allowing advanced weapons to reach Hezbollah.
Read: CIA chief pays surprise visit to Israel
Last Friday, the Wall Street Journal cited US officials who said they anticipated another series of Israeli strikes in Syria, against these missiles.
~~~~~~~~~~
On Sunday, the Times of London reported that Syria had trained sophisticated Tishreen missiles on Tel Aviv, which would be used if Israel entered Syrian air space again.  It said that satellite images indicated this, but provided no source.
Read: Syria training advanced missiles on Tel Aviv — report
At the Sunday Cabinet meeting, PM Netanyahu, refusing to be intimidated by this report, responded that:

"The Israeli government is acting in a responsible and measured way in order to secure the safety of Israel's citizens and prevent advanced weapons from reaching Hezbollah and the terror organizations. We will know how to do this in the future as well.

"The Middle East is experiencing one of its most sensitive periods in decades. We are following developments closely and are readying for any scenario."

~~~~~~~~~~
It's not possible to consider the current situation in Syria without looking at the role of the US -- or, more correctly, the US's failure to play a decisive role at a critical earlier point in the Syrian civil war -- as a factor in what's going on.  The vacuum left by American inaction has permitted Russia to move more vigorously in this region.
The Russians, who want to be able to call the shots here, have even sent in warships.  Five entered the Mediterranean last Wednesday, when the Russian foreign minister announced:

"The Russian Defense Ministry started setting up a special force of warships in the Mediterranean in order to protect Russia's interests in the region."

Yesterday, two additional Russian warships were brought in from its Black Sea fleet.
~~~~~~~~~~
US officials are concerned now that Russian shipments of armaments to Assad will allow him to prolong the war.  But I was stuck by how clueless the Americans are when I read this comment by Senate Foreign Relations Committee Chairman Robert Menendez.

"We can watch from the sidelines as the scales are tipped in Assad's favor, or protect US national interests by supporting the armed opposition striving to build a new Syrian future."

From: US: Russian missiles could embolden Assad
"a new Syrian future," huh?  This might have been true a year or 18 months ago. But now there are reports of Iraqi al-Qaeda forces over-taking other rebel forces in Syria.  The Nusra Front was already Islamist, but is being splintered by the al-Qaeda forces that have a larger anti-Western, jihad, greater Islamic nation agenda.
Were the US to supply rebels with weapons, they might well end up in al-Qaeda hands.
Israel cannot say this -- is taking great care not to say this -- but me?  I'm hoping Assad, as vile and immoral as he is, does not fall.  For the very likely alternative is worse for this entire region.
Writes Reuters:

"... if the West were to intervene, it may now be under pressure to attack al-Qaeda opposition forces rather than Assad."

Read: Syria's Nusra Front eclipsed by Iraqi al-Qaida
~~~~~~~~~~
At the same time, rumors that Russia had already sent S-300 anti-aircraft missiles to Syria have not been confirmed.  In fact, while Russia is saying that it must honor its previously signed contract to deliver them, it is not at all certain that this will happen.
Former head of IDF military intelligence Amos Yadlin is one of the analysts who is not convinced that Moscow will actually deliver the missile batteries...


"in Yadlin’s assessment, the S-300s are just one piece in the complex face-off over Syria now playing out between Moscow and Washington."

Read: Russia knows exactly what the fuss is about
It is enormously irksome, when Russia's Foreign Minister Sergey Lavrov claims that there's no problem because the S-300 is a defensive weapon, implying that Israel just has to stop attacking and all will be fine.  He knows very well indeed that Israel attacks are not against Syria, but against the transfer of weapons to Hezbollah and are thus defensive in nature.  He is, indeed, enormously disingenuous.
There is no way that Israel will permit the transfer of S-300 missiles, should they arrive in Syria, to be transferred to Hezbollah. They would, I imagine, have to be hit before installation was complete.
~~~~~~~~~~
Please see what Shoshana Bryen, of the Jewish Policy Center, has to say about this situation.
While referring to Putin's "disdain for the Obama Administration" (her description of Putin's treatment of Kerry makes fascinating reading), and saying that "neither Secretary of State Kerry nor the president he serves seem to understand Russia's goals in the region, and thus neither is prepared to uphold our own interests," in the end she believes Russia's policies are shortsighted and will fail.  Putin, she says, has taken on the impossible task of controlling the Shiite-Sunni fighting.
Her vision is sharp and broad.
Read: Russia: Playing a Losing Hand like a Winner
~~~~~~~~~
One last mention of Syria here:  Last night, IDF soldiers patrolling near the border with Syria in the Golan were fired upon.  A vehicle was damaged, but no one was hurt.  The IDF issued a statement that "IDF forces returned precise fire at the source of the gunfire. They reported a direct hit."  The Syrian army had claimed that it destroyed the IDF military vehicle and everything in it.
"We will not remain silent regarding fire from Syria at our territory," said Defense Minister Yaalon.
~~~~~~~~~~
And then a correction: In my last posting, I had cited an article by Avigdor Haselkorn on the war over preemption.  In it, he spoke about the fact that Iran is trying to get Fateh 110 missiles into Hezbollah's hands because this would "deter Israel from launching a preemptive strike on its nuclear facilities by holding hostage Israel’s Dimona reactor as well as other strategic installations."
Well, it has been pointed out to me (and for this many thanks to Jeff D.) that the Fateh missiles have a range of 300 kilometers, but from where those missiles would be launched to Dimona is well over 300 km.  I never would have caught that.  Haselkorn's piece still has considerable validity, but I am eager to set the record straight here.
~~~~~~~~~~
I had hoped to address the other matter in which Israel requires strength:  Kerry is coming on Thursday to move forward that ever elusive "peace process," and there is much to say about the political dynamics this issue engenders.  But not today -- this posting is long enough.  Hopefully, this will be my key focus when next I write.
~~~~~~~~~~
© Arlene Kushner. This material is produced by Arlene Kushner, functioning as an independent journalist. Permission is granted for it to be reproduced only with proper attribution.
If it is reproduced and emphasis is added, the fact that it has been added must be noted.


Technorati Tag: Israel and Syria and Russia and Hezbollah.