Tomorrow night begins the holiday of Shavuot (one day here in Israel, two days elsewhere), which celebrates the receiving of the Torah (or the Commandments) and is marked by study through the night. 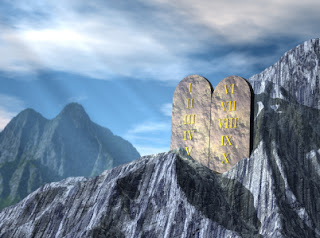 Credit: ou
A good time, once again, to mark our priorities: to remember what comes first and what must guide us.  A time to turn our focus heavenward and step away from the political nonsense of every day.
And so, to all, a Chag Shavuot sameach.
~~~~~~~~~~
But for today, there is still that political nonsense...
Right now, we seem to be a whipping boy for the Syrians.  On both sides.  It's a great irony.

The rebels are saying that we are conspiring to keep Assad in power. The Turkish daily Zaman reports that the claim was made by Abdulkader Saleh, commander of the al-Tawhid Brigade, which, I am reading, has ties with the Muslim Brotherhood:

"The opposition was going to take over arms, so Israel attacked. There is evidence pointing to this. There were some high-ranking officers with whom [the opposition forces] got into contact. [Those officers] were going to defect from [the Assad administration], handing over arms to the opposition. Israel hit these posts in fear that the opposition would take over the arms."

"...This assault, of course, was intended to support the Assad administration."

Read: Syrian Opposition: Israel Conspiring to Keep Assad in Power
This is, of course, not exactly what was going on with the alleged Israeli hit on Iranian weaponry in Syria.  The Israeli concern was and is that major game-changing weaponry such as sophisticated missiles not fall into hands of terrorists groups, whether Hezbollah or jihadist groups associated with the Syrian rebels, who would then turn those weapons on Israel.  This was not about the sort of weapons defecting Syrian officers would likely be in a position to turn over to the opposition for use in fighting Assad.
What caught my eye, however, is that this rebel commander said that,

This is as I wrote, and is one more indication that if rebels take Syria, they will feel no compunction about attempting to move into Israel.
~~~~~~~~~~
What intensifies the irony is the claim by the Syrian government that they can now go into the Golan whenever they want.  According to the Syria SANA news agency, Syria’s Information Minister, Omran al-Zoubi, claims this right because of Israel's act of aggression against Syria in hitting Syrian sites (that is, storage depots with weapons).

Read: Syrian Minister: We Have the Right to Enter the Golan Anytime
But, as was made very clear at the time, any Israeli attack on those sites (not officially acknowledged) would be to prevent a transfer of weapons and was not intended as an attack on Syria.
This is mostly saber-rattling, but....
~~~~~~~~~~
Putative PA president Mahmoud Abbas is doing his own version of saber-rattling these days.  His accusation is that Israel is attempting to harm the Al-Aksa Mosque on the Temple Mount:

"If Israel is dreaming about establishing facts on the ground through its daily attacks against the Al-Aksa Mosque, then it is deluded.

"Eastern Jerusalem is our capital city, Al-Aksa belongs to us, the Church of the Holy Sepulcher belongs to us, and we will not accept [the Israelis'] harassment."

Read: Abbas Warns Israel Over Al-Aqsa Mosque
This, undoubtedly, is the come-back for recent statements regarding Jewish rights to pray on the Temple Mount.  If our leaders are serious about asserting on rights, on the Mount and elsewhere, we must understand that the battle ahead will not be easy.  But, it is necessary.
~~~~~~~~~~
I say "If" because of news that has broken today that is generating more than a little unease.
The major story is that secret talks were held two years ago between the Israel and the PA.  Avi Issacharoff, writing in the Times of Israel, reports on information he has secured via an interview with the head of PLO Executive Committee, Yasser Abed Rabbo.  And so even as I report on this, we must remember that it all comes from Abed Rabbo. 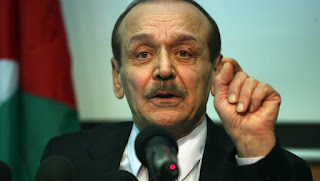 Credit: AFP/Abbas Momani
What he says is that there were secret meetings between Israel and the PA in late 2010 and early 2011 either in order to conduct negotiations or initiate them.  A series of meetings was held between Yitzhak Molcho, Netanyahu's envoy, and Abed Rabbo, at Molcho's home in Israel.  And then Prime Minister Netanyahu himself met with Rabbo, after which communication terminated.

"According to Abed Rabbo...Netanyahu seemed ready to renew negotiations within the framework of two states based on the June 4, 1967, lines. But the prime minister subsequently backed away from the contacts and the channel was discontinued."

Not unsurprisingly, there is no comment from the prime minister's office.
~~~~~~~~~~
Abed Rabbo is reported as saying, with regard to his meetings with Molcho:

"We discussed all the issues. But I sat and demanded in those meetings that Israel present its map for a two-state solution concept, and publicly declare its willingness to speak about the 1967 lines as the framework for the meetings. Molcho was not prepared to present a map and the meetings were truly exhausting, a lot of chatter without agreement." (Emphasis added)


Read: Revealed: Netanyahu’s secret talks with the Palestinians
Is Abed Rabbo's description of a Netanyahu who "seemed ready to renew negotiations within the framework of two states based on the June 4, 1967 lines" consistent with the picture of a Molcho who would not present a map and talked a great deal with no agreement?

“Molcho," says Abed Rabbo, "was willing to include a military official in the meetings, a map expert who would present Israel’s security demands to me. Molcho emphasized in the meetings the importance of the Jordan Valley, settlement blocs, and early-warning stations on West Bank mountains. I ruled this option out. He claimed that he wanted to show me these considerations on a map, but I told him that Israel’s security concerns are not a starting point — it’s a non-starter and under the pretense of ‘security,’ you can claim anything. I made it clear that, first of all, we need to agree to speak about 1967 lines, and then start debating security issues, or even both in parallel.

"...From our standpoint, it was possible to discuss borders and security issues, but it cannot be that ‘security considerations’ would determine the borders." (Emphasis added here and above)

Was Molcho, on behalf of the prime minister, prepared to talk about giving away the store?  Myself, I would not talk about surrendering a square centimeter, but it doesn't sound like he was conveying a readiness to give it all away.
~~~~~~~~~~
Abed Rabbo describes a Netanyahu who was prepared to begin serious negotiations:

"Netanyahu didn’t rule anything out. He mostly listened. He asked me about the idea of a joint committee to manage issues related to the Temple Mount in Jerusalem — as Olmert had suggested...In the end I said to him, ‘If you want to start something serious, if you agree to the 1967 borders as a basis, including Jerusalem, then we can talk about the other things.'

“He asked if we were ready to start negotiations immediately. I said yes...

"He said to me, 'Give me two days and I’ll get back to you.' We said goodbye. He asked me to send his regards to Abu Mazen. And from that point on, I didn’t hear from Bibi or Molcho. A year later, I relayed him a message through a third party that I’ve been sitting waiting by the phone for a year, but Netanyahu did not respond."

We could speculate unendingly on what was going on here.  Maybe Netanyahu was testing the PA; maybe he was serious and then thought better of it or was dissuaded.  Perhaps Abed Rabbo read more into Netanyahu's words than was intended.  The meetings were not documented.
~~~~~~~~~~
There are those who will panic at this, because Netanyahu allegedly met in secret with a PLO representative and asked about a joint committee for Temple Mount issues, as Olmert had proposed. But what I see in the end is that the prime minister did not pursue those talks and stonewalled Abed Rabbo.  And, in fact, as the meetings were not documented, he left nothing on the record to weaken Israel's position.  And there were no maps.
In point of fact, this interview may have been provided by Abed Rabbo right now as a political tool: a way to make Netanyahu look less than forthcoming on negotiations and thus bring pressure to bear.
I will state here what I have said many times: I do not always trust Binyamin Netanyahu.  He has given me scant reason to do so.  And, demonstrating a particular weakness, he is all too ready to show himself as accommodating -- which leads him down a dangerous and slippery slope. (See more on this below.)
I have never believed, however, that he is an Ehud Olmert clone, simply itching to give our country away.  And, whatever my unease, whatever my distress, I have not yet seen clear evidence that he is that clone.  I pray that I never do.
~~~~~~~~~~
What is disconcerting, annoying, worrisome is the announcement that the prime minister has ordered a delay-- of "at least three weeks" (we shouldn't hold our collective breath) -- in issuing tenders for building 1,500 units in Ramat Shlomo, which is over the Green Line, even though all procedures were in place. 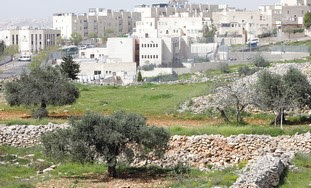 Credit: Ariel Jerozolimski/The Jerusalem Post
According to the JPost, the holdup was because of "political sensitivity."  You may remember when Vice President Biden was here and a routine announcement came out about building plans in Ramat Shlomo.  US officials responded as if Israel had deliberately mortified their vice president, and used this issue to generate quite a scene (with Hillary Clinton doing quite a bit of that generating).
Ramat Shlomo construction was held up for some time after that, which was unfortunate, because new housing is needed in that neighborhood.  It's not all about politics here, folks -- it's about needing places to live.  If the project was now set to go forward, it should have gone forward.
~~~~~~~~~~
I will add here in closing, with regard to fears of our prime minister "giving away" eastern Jerusalem, that, to the very best of my understanding legislation is on the books since November 2010 that requires approval in a public referendum and the votes of at least 60 Knesset members before any withdrawal from East Jerusalem or the Golan Heights.

See: Referendum bill passes Knesset vote
~~~~~~~~~~
© Arlene Kushner. This material is produced by Arlene Kushner, functioning as an independent journalist. Permission is granted for it to be reproduced only with proper attribution.
If it is reproduced and emphasis is added, the fact that it has been added must be noted.


Technorati Tag: Israel and Netanyahu and Abbas and Syria.