Arlene Kushner: Does Obama Really Have A Choice In Attacking Syria?


Dear friends, I can do no more than write in response to the moment. The situation with regard to Syria is so fluid, that by the time you receive this, it may have shifted.  Accept my apologies in advance if that occurs.
~~~~~~~~~~
As to choice: More and more it's looking as if there are no alternative options for Obama with regard to whether the US hits Syria.  He is being squeezed into something that he might have otherwise passed on.

Certainly, the climate is heating up, and the media are talking about "when, and not if."  What is more, the leaders of Britain and France are ready to go and expecting him to participate with them.  From behind the scenes, the Gulf states, most notably Saudi Arabia, are encouraging this action because of their fear of Iran.
I read about Obama as the head of the coalition, and I laugh.  It is not altogether clear that he has even decided definitively; Defense Secretary Hagel keeps saying the military is ready for whatever the president decides.
The issues haven't changed for Obama.  He is obsessed with securing unassailable documentation, even beyond all that has been provided (including conversations among Syrian intelligence agents that were picked up by Israel), and in spite of what people speaking for the US have said about the certainty that the gas attack was Assad's doing.  Maybe he is looking for someone in the Syrian military who participated and has since defected?  To me, to stretch this out any further seems a stalling tactic. Does a leopard change its spots?
The other issue is one of not moving unilaterally.  We've covered this ground. The UN Security Council is blocked because of resistance by Russia and China.
But now US State Department spokesperson Marie Harf has said:

“The Security Council is an important venue…but we cannot be held up in responding by Russia’s continued intransigence." (Emphasis added)

Read: Citing Russian logjam, US says it will act on Syria without UN green light
While Russia will veto action again Syria in the UN, a source in Moscow told the Interfax news agency this evening that, "Russia will not intervene if Syria is attacked."
Russia will stand aside, although Syria has use of Russian equipment that has already been provided.
Read: Russia says 'won't intervene' if Syria attacked
~~~~~~~~~~
Because of the readiness of certain other nations to participate, the US would not be going it alone. And there is precedent for doing this.  Says the International Committee of the Red Cross, arbiter of the Geneva Conventions:

"In crises and conflicts since the end of the Cold War considerations specifically identified as 'humanitarian' have been repeatedly designated by States and international bodies as grounds for threatening, and embarking on, international military action."

Read: Humanitarian issues and agencies as triggers for international military action
What we're looking at here, at least in part, is a tension between what is technically "legal" according to UN or international legal standards as widely interpreted, and what is humane and proper in the 21st century.  Can civilized people stand by while innocents by the hundreds, including small babes, are gassed because the UN has not approved a response?
Part of the legal catch here is with regard to the fact that Assad is killing his own people.  This raises issues of sovereignty.  (Did I just write that?)  Were he hitting innocents of another nation with gas, the situation would be more clear cut.  Legally, not morally.

~~~~~~~~~~
If there is an attack on Syria, it will not represent the first blows of a full scale war. That much is clear.  It would be, rather, a means of delivering a warning meant to deter him from further use of non-conventional weapons.  While his military would be somewhat degraded, he would not be taken out, and it is assumed that -- minus the gas -- the civil war would go on.  It might even go on without a major shift in balance -- although that would remain to be seen.
In my opinion, this is the preferable action -- to deliver a much-needed message to Syria and its patron Iran and to strengthen seriously eroded US deterrence power, without handing a victory to dangerous jihadist rebels.
Maj. Gen. (res) Uzi Dayan, a former deputy chief of the IDF General Staff and a former head of the National Security Council (pictured below), told Times of Israel that he is strongly opposed to taking down Assad:

"What really frightens me is a ring of Muslim Brotherhood nations from Turkey to Egypt. That’s what I’m most concerned about.

"Whoever is interested in keeping the Hashemite Kingdom in Jordan, would do well not to support the deposing of Bashar Assad, because they [Jordan] are the next target."

What is more, Dayan believes that the 100,00 who have thus far died in Syria would be a "promo" compared to what would happen if jihadists took over.
Read: ‘A pity they both can’t lose’ 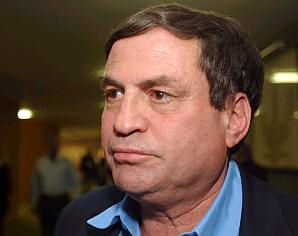 Credit: jafi
~~~~~~~~~~
But there are others who see it differently.  Some, focused on Iran, are eager to see a more significant crippling of Iran's proxy, Syria -- and with it, Hezbollah.  Prime Minister Netanyahu is said to be among these -- he reportedly sees the weakening of Iran as trumping all other objectives.
Among analysts, there is Daniel Pipes, who is arguing for a stronger hand in hitting Assad because of unanticipated results from a limited strike.  It might, he says, actually increase Assad's dependence on Tehran or cause an unstable Assad to act in erratic fashion.
Read: Arguing against "Limited" Strikes on the Assad Regime
These arguments, whether valid or not, are moot: There is no way that Obama is going to commit to a major war effort in Syria.
~~~~~~~~~~
Predictions are that Obama will rely on the high precision Tomahawk cruise missiles -- which are essentially unmanned aircraft capable of changing course to hit a target -- launched from destroyers out at sea, out of immediate range of retaliation.  They are frequently the "weapon of choice" for US presidents.
The four US destroyers currently in the Mediterranean can each carry "dozens" of Tomahawk missiles.
You can see further information about this weapon here: Tomahawk Cruise Missile
~~~~~~~~~~
Targets would be military -- military compounds, front-line artillery batteries, etc.  There would be no attempt to hit non-conventional weapons caches.  And no attempt to physically take out Assad or his government.
It is likely that the attacks would continue for several days.
~~~~~~~~~~
Here in Israel there is heightened interest in what will happen, of course.  Concern.  But in the main no panic, other than a rush on gas mask supplies.  People are going about their business.  In fact, there are still end-of-the-season vacationers enjoying themselves in the north, with no warnings coming -- as of yet -- from homefront authorities.
After a high level security meeting today, a spokesman for Netanyahu said:

"Pursuant to the security consultation that was held today, there is no reason to change daily routines."

Read: Netanyahu: No Need to Change Routines of Life
The Air Force increased the level of alertness of its Arrow 2 missile system, which is designed to intercept ballistic missiles. The IDF is boosting its forces in the north; there has been a partial call-up of reserves.
Iron Dome batteries have been moved to the north and center of the country, as well.

Credit: Jewish virtual library
Israeli intelligence considers it unlikely that there would be a major retaliation by Assad aimed at Israel -- his inflamed rhetoric aside.  Both Netanyahu and Ya'alon have made it crystal clear that were there an attack on Israel, the response would not be tempered.
Warned Netanyahu:


"The State of Israel is ready for any scenario. We are not part of the civil war in Syria but if we identify any attempt whatsoever to harm us, we will respond, and we will respond with great might."

"Those who dare to test us will encounter the might of the IDF."

Read: Netanyahu: If attacked, Israel will respond with great might
Assad would be wise to heed these warnings. If we are attacked, we will go to war with Syria and his regime would come down.
What there may be is a response -- a handful of rockets -- that is tepid enough for Israel to possibly even ignore, and in any event not sufficient to provoke an all-out Israeli attack.  It might come second-hand, via Hezbollah, from Lebanon, giving Assad deniability.
This, of course, is simply the best guess as to what may happen.  No one can be certain.
~~~~~~~~~~
Yesterday, Israel's National Security Adviser Maj.-Gen. (res.) Ya'akov Amidror met in Washington with Susan Rice, his American counterpart. Whatever else they discussed, I know there was a request put forth that Israel be forewarned about an attack.
Which leads to the next question, when?
I'm reading some reports that say possibly as early as Thursday (tomorrow), but I doubt this.  UN inspectors have not left Syria yet -- and in fact have returned to the site of the gassing.  My understanding is that there is considerable reluctance to do anything while they are in the field.  I believe they are leaving early next week.
Certainly waiting weeks cripples the impact of what is intended, which requires a certain immediacy.  And the US is advancing yet another reason for acting with speed: Fear of another chemical attack.  The city of Aleppo, Syria's largest city and a rebel strong hold, is considered a likely target.
Another ten days perhaps, at the outside?  Sooner?
~~~~~~~~~~
I table all other news for another post...
~~~~~~~~~~
© Arlene Kushner. This material is produced by Arlene Kushner, functioning as an independent journalist. Permission is granted for it to be reproduced only with proper attribution.
If it is reproduced and emphasis is added, the fact that it has been added must be noted.