A Time of National Pain


And humiliation, as far as I am concerned. We have handed a victory to the bad guys just in order to bend over backwards, like a contortionist, a pretzel, to show the world how "eager" we are to bring the Palestinian Arabs to the table.

What I see is that chances that the government will reverse itself with regard to the 26 terrorists prisoners that are to be released tomorrow is almost non-existent. They are standing by their decision and the court is standing by their right to make that political decision, grief of families notwithstanding.

I cringe at what's coming tomorrow, with the celebrations as they are released.  (Photo is of a previous such occasion.) 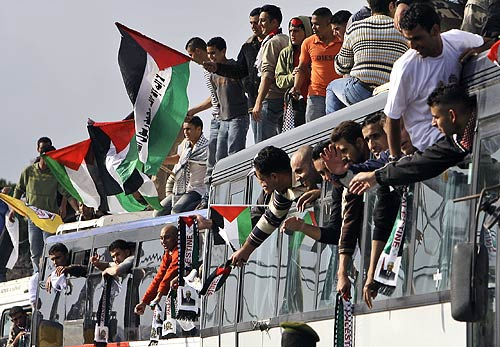 But I believe we must keep our eye on the way to be most productive in fighting the current situation.

This means -- among other things -- letting the world know what low-life scum they are.  (I never call such people 'animals,' because I'm an animal lover and I think this would insult good creatures.)   There should be every effort made to publicize their true nature, so that they are not idolized and not mistakenly perceived as political prisoners who were wrongly incarcerated by Israel.  (See more on this below.)

This is a job that falls to all of us.  Do it by sharing this posting, and by writing letters to the editor, and by calling in to talk shows, and writing op-eds where you can, and simply talking to friends and acquaintances.

The decision on which prisoners to let out in this go-round was made last night by a special committee that had been appointed for this purpose.  Chaired by Defense Minister Moshe Ya'alon, it included Justice Minister Tzipi Livni and Science Minister (and former Shin Bet head) Yaakov Peri. Absent from the panel were Prime Minister Netanyahu, recovering from hernia surgery, and Public Security Minister Yitzhak Aharonovitch, who is on official business in Russia.

The Shin Bet had provided information on the security risks each prisoner represented and this data was drawn upon as the decisions on whom to release were made.  These particular terrorists were considered low risk.  Some were coming close to the end of their terms.  Some were accomplices and didn't directly have blood on their hands -- 17 of the 26 to be released have Jewish blood on their hands.

Fourteen will be released to Gaza, and some of them are Hamas members.  According to YNet, "The ministers' choices were influenced by the aim of improving Abbas' standing among the Palestinians, but also not to arouse public scrutiny in Israel."

Among those who are presumably not the "worst," and who will be released, are:
Then there are Abu Satta Ahmad Sa’id Aladdin and Abu Sita Talab Mahmad Ayman, convicted in 1994 for the murder of David Dadi and Haim Weizman. After accomplishing the double murder, they slept in Weizman’s apartment, cutting off their victims' ears as proof of what they had done.  Perhaps you didn't know that Arab terrorists often "indulge" in bodily mutilation of their victims, but they do.

The "Palestinian foreign ministry" issued a letter, made public yesterday, that advises "Palestinian ambassadors" to emphasize to international diplomats that the prisoners who are about to be released are not terrorists but "freedom fighters."

The letter, which was first obtained by Haaretz, says that these are political prisoners who were merely reacting to the "terrorism" of Israel:

“A terrorist is someone who forcefully occupies the other’s land, expels him and comes to live in his place not the Palestinian political prisoner, [who is] a freedom fighter."

You may find this ludicrous.  But remember that there are people who became convinced that Israel is an "apartheid" state simply because our enemies kept saying it, and in spite of the fact that it's absolutely not the case.  And the PA, similarly, has convinced a good part of the world that Israel "belongs" behind the "1967 border," when in fact that line was only a temporary armistice line and it was understood at the time it was set in 1949 that a permanent border had yet to be negotiated.

Truth is irrelevant to those attacking us. And the most effective way to combat this is via facts exposed with solid documentation and firm conviction.


As to Israel as "terrorist" because we are "occupying someone's land," this too needs to be vigorously fought with truth.

Judea and Samaria constitute Jewish land. This is the case historically -- for the area beyond the Green Line represents the ancient heritage of the Jews -- and legally.  In 1922, the League of Nations, via the Mandate for Palestine, gave all the land of Palestine from the river to the sea to the Jews for a homeland.  This was an article of international law that has never been overturned or reversed.

What is more, the notion that Judea and Samaria are meant to be a "Palestinian State" is doubly ludicrous.  For when Israel liberated this land from occupation in 1967, it was Jordan that was the illegal occupier there, not a Palestinian entity.  As I've mentioned many times before, Security Council Resolution 242 of 1967, which talks about negotiations to determine the border, never mentions a Palestinian people or a Palestinian state.

Now is no time to be silent, as the enemies of Israel wield their weapons of words and inverted concepts.

Deputy Foreign Minister Ze'ev Elkin (Likud), definitely one of the good guys, in giving voice yesterday to his deep distress about the government's decision to release the terrorists, alluded to this inversion of concepts:

"I am angry at the approach that says that releasing terrorists brings peace nearer, and building a kindergarten [i.e., over the Green Line] prevents peace.

"If [the Palestinian Authority] asks for the release of the murderers as the first step, that says something about their priorities.".

And the more serious a terrorist's crime was, the higher his salary. "There is a very problematic educational message here."

Two additional articles to share in this posting. The first, a blog posting by Captain Barak Raz, who has just completed two years as the spokesman for the Judea and Samaria Division of the IDF.  He wrote, in part:

"...I always try to explain: the threat is real. The lack of 'successful' terror attacks from the West Bank in recent years should never be confused with a lack of motivation or desire on the part of Hamas, Palestinian Islamic Jihad, or the dozens of other organizations that work tirelessly in order to reestablish themselves in the region. The relative calm and security stability that exists in the West Bank today has by and large resulted from an ongoing security effort headed by the IDF.

"...The consequences of a destabilized West Bank are dire – for Israelis, for Palestinians, for the region, and perhaps the world.

"...a destabilized West Bank would no doubt affect the region beyond our borders, when considering the situation in other Middle Eastern countries, therefore becoming a concern of global proportions. Certainly when considering Israel’s overall strategic security situation and the wide-array of threats facing our small vulnerable country, both near and far, one can understand why we must do everything in our power to prevent a deterioration in the West Bank."

Read: No perfect answers: My 2 years as an IDF spokesperson

Now Captain Raz, a military person, declines to draw political conclusions. But those conclusions stare us in the face.  To turn any part of Judea and Samaria over to a weak and ineffective PA, with a security force that has collaborated with Hamas in some instances, is to guarantee instability in Judea and Samaria.

As "we must do everything in our power to prevent a deterioration in the West Bank," then it goes without saying that negotiating a "two-state solution" is a non-starter for Israel.

And this from Geoffry Alderman, who writes commentary for the Jewish Chronicle:

"...I must, in this connection, draw your attention to an authoritative statement made by Nabil Abu Rudeineh, a senior Palestinian Authority spokesman, who on July 21 declared that any deal reached with Israel would only bind the Palestinians 'temporarily.' This warning echoed that made earlier the same day by the other authorised spokesman, Yasir Abed Rabbo, who had declaimed in almost identical terms. The government of Mahmoud Abbas will not sign a final all-encompassing peace treaty. The very most they might agree to is a hudna — a truce, a tactical device to allow them to regroup and rearm."

Read: Not a scintilla of authenticity

There is an extensive and important history to the Palestinian Arab (or, more broadly, Muslim) concept of temporary treaties, which derives from the model of conduct set by Muhammad:  In 628, assessing his people as not sufficiently strong to take Mecca, he concluded a ten-year treaty -- the Hudaibiya Pact -- with the polytheistic Quraysh tribe that controlled the city.  Two years later, when had garnered considerably more strength, he abrogated the treaty and attacked the Quraysh overwhelmingly.

On May 10, 1994, a mere 10 days after having signed the Gaza-Jericho Agreement of Oslo, Yasser Arafat made a statement, publicly, but where he thought the media would not pick it up, that:

"This agreement, I am not considering it more than the agreement which had been signed between our prophet Muhammad and Quraysh..."

Mahmoud Abbas is a disciple of Arafat.  The more things appear to change....

The Palestinian Arab goal in negotiating with Israel is not peace, but a temporary lull that allows them to garner greater strength in order to destroy Israel.

The only way to repel the intentions of the Palestinian Arabs to destroy Israel is via uncompromising strength.  It is all that they understand.

So, we have agreed to release terrorists for the "privilege" of bringing the PA to the table (and, of course, to keep Kerry happy).

And on Wednesday those negotiations will begin.

JUST HOW CRAZY ARE WE?

Egypt and other issues will have to wait a bit more....


© Arlene Kushner. This material is produced by Arlene Kushner, functioning as an independent journalist. Permission is granted for it to be reproduced only with proper attribution.
If it is reproduced and emphasis is added, the fact that it has been added must be noted.
See my website at Arlene From Israel  Contact Arlene at akushner18@gmail.com