I tabled discussion about Egypt for some days, as I considered the release of terrorists from Israeli prison and related events here.  And in the course of those days, the situation in Egypt has escalated -- in some ways, inevitably, in some ways not.
The military regime of General al-Sisi had been threatening to take out encampments of Muslim Brotherhood resistance, if the people demonstrating for the return of Morsi did not disband.  Finally, Sisi acted.  As I write, some 500 people have died and the Islamists are not pulling back but rather responding with violence.
~~~~~~~~~~

I hesitate to endorse violence of this scale, and yet I champion the military in Egypt.  Al-Sisi acted when he understood that the growing strength of the Islamists in the street presented the specter of the Brotherhood again taking over -- something he was not about to tolerate.
Ron Ben-Yishai, writing in YNet, explains why the military decided to act at this time:

"...there were credible reports, including from Brotherhood members, that the pro-Morsi protesters in Cairo were accumulating weapons and defensive equipment and were also building barricades, meaning that as time passed it would become harder to remove them by force and the number of casualties would have been greater...

"In light of this, it is clear why the army decided to clear the Nahda Square and Rabaah al-Adawiya pro-Morsi sit-ins in Cairo. Hundreds of thousands of Islamists barricaded themselves in al-Adawiya, the larger protest encampment, located at the heart of the bustling middle-class Nasr City neighborhood."

Ben-Yishai describes the efforts of Western figures (including US Senators) to convince the Brotherhood protestors to reach a peaceful compromise with the new regime.

"...but the Brotherhood refused to budge even one millimeter from its positions.

"Encouraged by the newfound interest by international forces in their cause, they continued to demand Morsi's release as well as his reinstatement to the presidency. Until it was utterly clear that the Muslim Brotherhood refused to make peace with the new reality, General al-Sisi was under pressure to refrain from moving against the mass sit-ins."  (Emphasis added)

Read: Street battles in Cairo, and the Israeli connection
Let me say it very directly here: The position of the Obama administration has been counterproductive to a peaceful Egypt.  By reinforcing the Islamists sense of the support they had, the Americans have emboldened them.
~~~~~~~~~~
There are those who protest that Morsi should not have been overthrown because he was democratically elected.  But in these arguments I often find confusion between an election (even if fairly held) and a democratic society -- complete with civil rights and an open, liberal environment.  What Morsi was instituting was anything but.  He was in process of putting his people in place everywhere, and had adjusted the constitution to suit his goals.
Since the military action of the last couple of days, Brotherhood supporters of Morsi have been targeting Christians in Egypt.  Writes John Rossomando of The Investigative Project on Terrorism:

"Egypt's Coptic Christian minority has become a favorite target for Muslim Brotherhood supporters and other radical Islamists across the country in the wake of the military's decision to clear supporters of ousted President Mohamed Morsi from their Cairo sit-ins this morning.

"No sooner did security forces, backed by armored cars and bulldozers, clear encampments in the city's Nadha and Raba'a al Adiwiya squares did the Islamists turn to targeting Christian churches. Approximately 1,000 Muslim Brotherhood supporters set fire to the Churches of Abraham and the Virgin Mary in Menya.

"Angry mobs also targeted churches, monasteries and other church properties in Alexandria, Suez and a number of other cities in Upper Egypt, according to Egypt's Al-Ahram.

"Muslim Brotherhood members also firebombed Mar Geergiss Church, the main Coptic church in the southern Egyptian city of Sohag, burning it to the ground. Islamists had previously raised an al-Qaida flag over the church. St. Theresa Church in Assiut in Upper Egypt was also burned.

"'It is a climate of violence...and the people are scared,' Father Rafic Greiche, a Catholic Church spokesman in Egypt, told Vatican Radio.

"The first reason is because the Christian minority, unlike the military, is vulnerable. Throughout the long year when Egypt suffered under Morsi’s Islamist rule, Christians and their churches were increasingly subject to attacks as the Muslim movement sought to make the position of the religious minority untenable...

"Second, the attacks on churches are not just a regrettable sideshow in what may be soon seen as a civil war as the Islamists seek to regain power...Rather, such attacks are an inextricable part of their worldview as they seek to transform Egypt in their own Islamist image. In the Muslim Brotherhood’s Egypt, there is no room for Christians or even secular Muslims. That is why so many in Egypt applauded the coup as perhaps the last chance to save the country from permanent Islamist rule.

"The church attacks should remind the West that the stakes in the conflict in Egypt are high. If the U.S. seeks to cripple the military, they won’t be helping the cause of democracy. The Brotherhood may have used a seemingly democratic process to take power in 2012, but they would never have peacefully relinquished it or allowed their opponents to stop them from imposing their will on every aspect of Egyptian society. As difficult as it may be for some high-minded Americans to understand, in this case it is the military and not the protesters in Cairo who are seeking to stop tyranny. Though the military is an unattractive ally, anyone seeking to cut off vital U.S. aid to Egypt should remember that the only alternative to it is the party that is currently burning churches."

Read: Why Does the Muslim Brotherhood Attack Churches?
~~~~~~~~~~
To Zvi Mazel, former Israeli ambassador to Egypt and now a fellow at the Jerusalem Center for Public Affairs -- what Morsi was about is quite clear:  "The Brotherhood was building an Islamic dictatorship," he says unequivocally.
Mazel was interviewed for the JPost by Ariel Ben Solomon today (with all emphasis added).
The new Egyptian government is pro-West and will have decent relations with Israel, he explained.
"What is better than that?"
He conceded that the Brotherhood’s strategy of martyrdom might succeed, generating support from the West, but cautioned that the West must understand that the army was in a fight with radical Islam.
Mazel thinks that Sisi is smart, and, once the crisis is over, is likely to take more of a backseat role, allowing the government to run affairs.
He sees the army as having more support among the people than the Brotherhood, and as being more organized.  Mazel's prediction is that there is not going to be a lengthy civil war. Rather, Sisi will calm the situation and work on getting Egypt back on its feet.
Read: Analysis: It’s official, military chief Sisi is new king of Egypt
~~~~~~~~~~
Increasingly in recent years the Sinai has become of hotbed of radical Islam, with terrorists presenting a security threat to Israel.  It must be remembered that the current Sisi regime is the first one to seriously take on battle with the Islamists there, which is no small matter.
In fact, there is the suggestion of very quiet cooperation between this regime and Israel with regard to taking on Sinai Islamists.  Just about a week ago, reports surfaced of a drone, which had entered Egyptian air space in the Sinai, taking out terrorists (thought to be Bedouin Salafists) who were about to launch a significant missile attack on Israel. While there were appropriate denials on all sides regarding Israeli infringement of Egyptian sovereignty, there is some reason to believe that the military regime, understanding the imminence of the threat to Israel, looked the other way -- and according to some reports may have even been involved in providing a warning.
Read: Report: IAF drone strikes jihadist rocket launching site in Sinai, killing 4 terrorists
If this is the case, it is a markedly -- startlingly -- different and more positive attitude than any we might have remotely expected from a Brotherhood regime.
~~~~~~~~~~
And where is Obama on all of this?  He apparently is reluctant to break his record of getting it wrong in Egypt.  Now he is playing tough with the military regime. Stating that the US relationship with Egypt cannot continue in the same way, he has cancelled a scheduled US-Egyptian military exercise.
Declared the president from his vacation home:


"We deplore violence against civilians. We support universal rights essential to human dignity, including the right to peaceful protest."

This reflects a serious naivete inappropriate for the president of the US.  What the Brotherhood was planning -- described above -- was not peaceful protest.
His current position runs the risk of prolonging the violence in Egypt.
~~~~~~~~~~
See Shoshana Bryen of The Jewish Policy Center on this (emphasis added):

"[For Obama] To posit that national reconciliation, respect for the rights of women and religious minorities, constitutional reforms and democratic elections are the immediate American objectives is to ignore the reality of armed conflict between the Muslim Brotherhood and the government. The Muslim Brotherhood is not a political party, it is a violent, radical transnational movement that used the format of elections to acquire the levers of state power in Egypt. Having been deposed, it is not leaving peacefully. Brotherhood attacks on churches, government assets and individuals require a response from the State. There is no immaculate way to put down an insurrection driven by those for whom death has long term political utility."

A car bomb has caused a major explosion in the Shi'ite Hezbollah stronghold of the Dahiyeh quarter in Beirut, killing at least 18 and injuring many more. Hezbollah is suddenly very vulnerable, not exactly a bad thing. 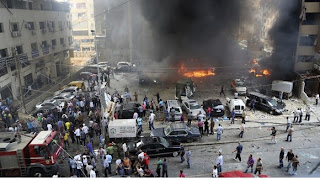 Credit: itv
While some Lebanese politicians are pointing a finger at Israel, there is every indication that this attack is a "pay back" by radical Sunni rebels fighting against Assad, for Hezbollah's assistance to the Syrian tyrant. An unknown group called “Brigade of Aisha” has taken credit.
What did Kerry say recently about conditions in the Middle East being conducive to a "peace agreement"?
~~~~~~~~~~

© Arlene Kushner. This material is produced by Arlene Kushner, functioning as an independent journalist. Permission is granted for it to be reproduced only with proper attribution.
If it is reproduced and emphasis is added, the fact that it has been added must be noted.
-----
If you found this post interesting or informative, please