I thought perhaps I would not post again about Syria until something actually happened, or until the whole shebang was called off.
But I've thrown up my hands with incredulity. And now I've decided to make a few comments.
What I find most incredible is how President Obama is behaving.  Since when is it proper form for a head of state to go on television and discuss a hostile military action he's thinking of taking, complete with multiple details?

This may come as something of a shock to him, but a president is supposed to make decisions, not just waffle.  Those decisions should be made quietly in consultation with appropriate decision-makers within the country -- Secretary of Defense, leaders in Congress, etc.  Then, as has been decided, action should be taken, after which public explanations of what is being done and why it is being done are very much in order.
Methinks he has it backwards.
~~~~~~~~~~
The rumors are flying so thick and fast it's impossible to keep track of all of them, never mind account for them.
As of today, it was still not certain that a final decision has been made regarding an attack on Syria.  We keep hearing that the president is waiting for more information.  The problem, we're being told, is that it is certain that the Syrian government launched the gas attack, but there is no concrete evidence tying it directly to Assad.  Does this mean that the government has to be given a free pass if it cannot be proven that Assad himself gave the order?
~~~~~~~~~~
Now, it had occurred to me that it's possible Obama has made his decision, and that his apparent indecision is simply a ruse, to throw the Syrian government off guard.  But I've rejected this. First, because that sort of decisiveness is not Obama's MO. And then because Syria is preparing for the eventuality of an attack (even if it is not a certainty).  Damascus has been pretty much shut down.
~~~~~~~~~~
Tonight a White House spokesman said that the final decision would be made (note: "would be") on the basis of national security interests.  That's the way national decisions are routinely made.  But this opens the door to a closer look at precisely why the US will bomb Syria, if indeed that is going to happen.
There has been a huge amount of talk about the immorality, as well as the illegality, of using gas as a weapon.  And it has been both suggested and said overtly that this is why Assad has to be weakened -- so he gets the message that he cannot use gas again.  Sec. of State Kerry's very emotional declaration about the inhumanity of what has been done resonated with a great many people. And I don't think that's bad.  Nor do I think it bad if a coalition of nations moves to act where there is conclusive evidence of such inhumanity.
But...but...is stopping Assad from using gas as a weapon against his own people in the American national interest?  If this is so, the connection is more than a bit vague.  One might argue that a host of potential enemies of the Western world would be less inclined to consider use of such weapons, if they understood that there would be swift repercussions.  A stretch, but OK.
If the cache of weapons of mass destruction -- gas, biological agents, etc. -- were to be secured, so that they could not be accessed by jihadist rebels in Syria, that would be more clearly in America's national interest.  For such jihadists would eagerly use such weapons against Americans.  But this is not the case.  This would require "boots on the ground" -- actually, a whole lot of boots.  And Obama has insisted he will not go this route.
~~~~~~~~~~
It has been pointed out that action against Assad does not have the goal of saving innocent Syrian lives.  And unquestionably, this is the case.  Over 100,000 Syrians have died in the last two years in the civil war.  The perhaps 1,000 and perhaps fewer who died from the gas attack pales in comparison in terms of absolute numbers.  And. as there is no intention of taking his regime down, Assad apparently has carte blanche to continue killing his people as long as he doesn't use gas.
My own perspective is that -- while indeed this is the ugly truth -- a stand again non-conventional weapons has its own merit.  Not everyone would agree.
~~~~~~~~~~
There are those warning that even though Obama speaks of a limited action, it could get out of hand.  If Assad's regime falls and al-Qaeda-affiliated rebels gain ascendancy, is that in America's best interest?  I would argue not.
~~~~~~~~~~
So, what is in the US's national interest here?  Re-establishing deterrence power.  Obama made his statement about a red line on gas.  He comes across as a powerless fool if he doesn't act, having said this.  The world is an incredibly dangerous place (something I hardly need point out).  If the president of the US says that such and such will not be tolerated, it is important that he be taken seriously.  Need I point out that everyone's eye is on Iran in this regard?
~~~~~~~~~~
What has surprised me is the way in which British PM Cameron has pulled back.  He seemed -- I suspect he is -- more resolute than Obama. 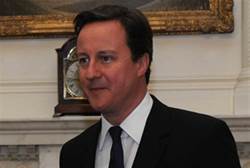 Credit: flash 90
But he is getting enormous domestic resistance because of Iraq, and today he told Parliament that, "It would be unthinkable to proceed if there was overwhelming opposition in the Security Council."  Does he consider the opposition of Russia and China to be "overwhelming"?  Never mind the Security Council: Without parliamentary backing, he will not proceed.  He is not being supported by either the Labor or the Independence party and has decided to delay a decision on action.
As I understand it, the British do have Tomahawk missile-bearing submarines in the Mediterranean.
~~~~~~~~~~
Earlier today, the (Russian) Interfax news agency reported that Russia was sending two warships to the eastern Mediterranean -- citing someone in the armed forces' general staff, who said the ships were a missile cruiser and an anti-submarine ship, which would arrive in the next few days because of the "well-known situation."
While no one imagined that Russia was about to attack the American vessels in the area, this move caused a bit of unease.  But, according to YNet, the Russian navy subsequently said this had nothing to do with the Syrian situation, but was part of  a long-planned rotation of its ships in the Mediterranean.
Read: Official: US sends 5th destroyer to eastern Med
~~~~~~~~~~
French President Francois Hollande still seems to be on board for military action on Syria. He is looking for a political solution but said this wouldn't be possible until there was some limited military action: "We will only manage this if the international community can put a temporary stop to this escalation in violence, of which the chemical attack is just one example."
It would seem that his goals are broader than Obama's. And it should be noted that he is more solidly supportive of the rebels.
France has dispatched an anti-air warfare frigate to the eastern Mediterranean, according to La Pointe magazine, cited by France24.
Read: French and Russian warships 'head for Syria'
~~~~~~~~~~
The US now has a fifth ship in the Mediterranean: The USS Stout, a guided missile destroyer, which is currently headed east.  According to a navy official, it was supposed to relieve the USS Mahan, but both ships might stay in the region for now.  Something to be watched.
~~~~~~~~~~
From US Ambassador to Israel Dan Shapiro, speaking on radio today, we had this (emphasis added):

"...President Obama has not yet decided exactly how we will respond to the use of chemical weapons, but there will be a strong and serious reaction because we, as well as the Arab League states, Muslim nations, and NATO members agree that the this is a very serious situation, in which the Syrian regime uses chemical weapons extensively against civilians, against women, against children – this is unacceptable and there must be a response."

Read: White House: Syria Intervention Will be Limited
Note his allusion to Arab League, and Muslim states, as well as NATO members.  They are not on board for participating in the attack, but at some level or another support such an attack. From the perspective of the US, invoking this support, which lends the aura of a large coalition, is important.
~~~~~~~~~~
It was announced today that the UN inspection team that was supposed to pull out next week is, instead, leaving on Saturday.
The fact that the team's departure was pushed up suggests that an attack, if it comes, is likely imminent.
~~~~~~~~~~
©Arlene Kushner. This material is produced by Arlene Kushner, functioning as an independent journalist. Permission is granted for it to be reproduced only with proper attribution.

Email ThisBlogThis!Share to TwitterShare to FacebookShare to Pinterest
Labels: Assad, Syria, The Disaster of Obama's Policy In The Middle East