Arlene Kushner: Clarifying What Is Happening Between Egypt And Israel In The Sinai


The Handle on Sinai

I had hoped -- deeply hoped -- to be able to turn my attention to matters other than the situation in the Sinai.  But the news there has loomed so large and seemed so ominous, that it merits on-going attention.  And so, once again, I begin with this subject.
This time, however, I believe I will be able to provide a bit more clarity about what's happening. 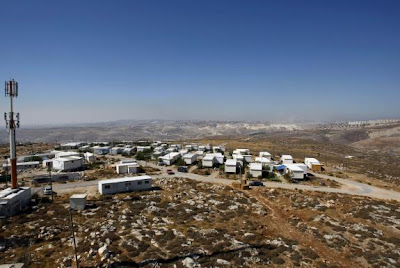 Credit: Indynews
~~~~~~~~~~
The story of Migron is painfully familiar: It is all about what is Jewish land, and what Arab. And it involves an Israeli legal system that favors Arab claims.
I have written about this community before, and will be brief here.  It was founded in 2001 on land that was understood to be Jewish land -- on a hill where it was considered important to have a Jewish presence for security reasons because of a new road built nearby.
In 2006, Peace Now (yup, them again), acting ostensibly on behalf of local Arabs, brought a petition to the High Court demanding that the community be dismantled because it was on Arab-owned land.  Proper documentation of that Arab ownership has never been provided. The government, however, accepted the claim and the Court ruled that Migron had to be dismantled.
Following a number of delays, the Court set the 28th of August 2012 as the final time for evacuation of the community.
~~~~~~~~~~
However, even though the residents maintained throughout that they were on Jewish-owned land, an anonymous American Jewish philanthropist provided funds to re-purchase a portion of the land -- upon which 17 families live -- from  the Arabs who claimed it.  It was a legal purchase and the assumption was made that these families, at the very least, would be permitted to stay.
The matter was submitted to the Ministerial Committee on Settlements, which said it had no problem with allowing the 17 families to remain.
The attorney-general, however, said that this was a legally "problematic" situation. The fact that our system permits an attorney-general the autonomy to go into court refusing to defend the position of the government is something I neither understand nor can explain.  Quite candidly, it makes me crazy.
~~~~~~~~~~
At any rate, the High Court is supposed to make a final ruling tomorrow and there is, as well, expectation that all of Migron's residents, or all minus the 17 families, will be evacuated from their homes by the IDF.  A great deal about this is incomprehensible to me.   No one is certain what tomorrow will bring.
~~~~~~~~~~
Many people have expressed support for Migron, for what may be happening there simply should not happen. Yesterday, Jeff Daube, who heads the Israel ZOA office, opened a satellite ZOA in Migron at the invitation of the residents, and held a press conference.
~~~~~~~~~~
A further complication in this crazy situation is that the caravans that the residents of Migron are supposed to move into are not ready.  The situation is unsafe for the many children who would be living there, as there are construction materials all over. The school building is not complete. And at least some of the caravans still lack electricity.
~~~~~~~~~~
Many, including myself, were deeply disturbed by a statement Minister of Security Affairs Moshe Ya'alon was reported to have made at yesterday's Cabinet meeting:  Those who resist evacuation will not be provided with places to live.  Excuse me?  And from Bogie?  The residents have said there would be no violence but they are talking about passive resistance.
~~~~~~~~~~
I have already mentioned the Levy Report, with regard to its conclusions and recommendations.   It is in a case such as this one in Migron that the Report has considerable significance.  In due course I will be returning to this.
~~~~~~~~~~
The Non-Affiliated Movement opened its conference in Iran yesterday, with the Iranian government playing the event to the hilt for PR purposes.
Much was made of the fact that delegates of 100 nations are participating: the Iranians delighted in noting that two kings, seven prime ministers, 27 presidents and one UN head were in attendance.  These two kings, seven prime ministers, 27 presidents and one UN head obviously have no compunctions about lending legitimacy to a genocide-threatening, renegade nation that should be ostracized.
What we learn, again and again, is that the world does not give a damn.
~~~~~~~~~~
After a heated battle about whether Hamas or the PA should represent the Palestinian Arabs at this conference, it turns out that neither Abbas nor Haniyeh went.
Abbas met in Ramallah yesterday with MK Zehava Gal-On of the far left party Meretz.  Regrettable that she chose to undermine the government position -- when Abbas refuses to meet with Netanyahu.
~~~~~~~~~~
On the agenda of their discussion was a recent letter sent to the Quartet by Foreign Minister Avigdor Lieberman, who said that there would be no progress in the peace process as long as Abbas was PA president.  He called for Abbas to be replaced in elections.
Lieberman was correct and also very mistaken.  There will be no progress in negotiations as long as Abbas heads the PA. But Lieberman is dreaming if he imagines that Abbas would be replaced by someone more genuinely moderate. It is the system and the entire cadre of PA leaders that is adamant in not negotiating genuinely with Israel.  If anything, with the influence of Hamas increasing, those representing the PA have become only more radical and intransigent.
All Lieberman achieved then was to provide Abbas with an opportunity to voice righteous indignation.
~~~~~~~~~~
School started here in Israel today.  It proceeded without incident. But yesterday  three rockets were launched into the Sderot area.   A little known jihadist Salafi organization claimed credit.
~~~~~~~~~~

© Arlene Kushner. This material is produced by Arlene Kushner, functioning as an independent journalist. Permission is granted for it to be reproduced only with proper attribution.
http://arlenefromisrael.squarespace.com/current-postings/2012/8/27/august-27-2012-the-handle-on-sinai.html

Technorati Tag: Israel and Egypt and Sinai and Migron.