Barry Rubin analyzes State of the Union Address on Foreign Policy: Careful Phrasing Conceals Disasters, focusing more on Obama's foreign policy claims than on his statements on the economy.

For example, Rubin notes that this time around, Obama did not claim to have destroyed Al Qaeda:

In other words, someone did a bad job of proofreading the speech. Of course, all of this glosses over the fact that al-Qaida hasn’t been defeated. It is on the march in Mali, the Gaza Strip, Somalia, Egypt’s Sinai Peninsula, Yemen, and other places. 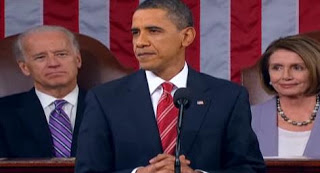 Obama's Middle East policies over the past four years have left the area more dangerous and radicalized than when he first took office -- a fact that Obama goes to some length to avoid and obfuscate.

Here is Rubin on Obama's claim that "ending the Iraq war has allowed us to strike decisive blows against our enemies.”


This is a coded reference to the anti-Iraq war argument that intervention in that country was tying down American forces that could be used elsewhere. Obama is saying: Now that we are out of Iraq we’ll really get those terrorists!

Yet Obama has claimed victory over the terrorists while U.S. forces in Iraq were at their height. His own statements undercut that argument. And what big new way is the United States been striking blows at its enemies since the withdrawal? I cannot think of anything (continued drone strikes in Yemen?). But if you think that the Benghazi terrorists (not the California videomaker), the Egyptian Muslim Brotherhood, Hamas in particular, the Syrian Brotherhood and Salafists, Hizballah, etc., are “enemies” then how has the Obama Administration escalated efforts against them now that it has pulled all those troops out of Iraq and can spare them for other operations?

Like much of Obama’s speech, if one actually pays attention to the language and claims, it dissolves into ridiculousness.

Another example of the absurdity of Obama's speech in regards to the Middle East is his claim that “as the tide of war recedes, a wave of change has washed across the Middle East and North Africa, from Tunis to Cairo, from Sana’a to Tripoli.”


Obama could have said the same thing two years ago. Since then, however, the shaky coalition government in Tunisia is crumbling after the most courageous opposition leader was assassinated and the Brotherhood is tightening its hold. In Egypt, the Brotherhood is in power and at the very moment Obama was speaking was engaged in repressing street protests. In Yemen, substantially nothing has changed. In Tripoli (it was wise not to mention Libya’s other main city, Benghazi) there is a reasonable level of success.

During the 2012 presidential campaign, by necessity Obama had to focus on attacking his opponent than on listing his accomplishments after 4 years in office.

With no opponent now to rebut him, Obama is free to make claims that a  fawning media will do little to contradict.

It is left to pundits like Barry Rubin to point out the real world that exists outside of the Obama White House.


Technorati Tag: Obama and State of the Union.

Email ThisBlogThis!Share to TwitterShare to FacebookShare to Pinterest
Labels: Obama's State of the Union Address