Why Are Terrorists Who Murdered US Ambassador Chris Stevens Walking Free In Benghazi In Public?

It has been five months since the murder of US Ambassador Chris Stevens and 3 members of his staff, with Obama and Hillary Clinton apparently doing as little during that time as they did during the events leading up to -- and during -- the day of tragedy of that terrorist attack.

Rubin notes that at the very least, even though they were still able to appear publicly -- the group identified by witnesses as being behind the attack was forced to cease their activities.

But now that has changed as Libya militia linked to U.S. attack returns to Benghazi. 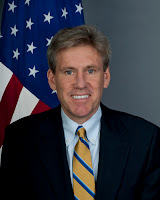 The Ansar al-Sharia (Helpers of the Sharia) now control Benghazi’s western entrance, a southern checkpoint, and security at a hospital. One passing car honks to greet the Ansar al-Sharia guards and waves the al-Qaida flag out the window at them.

As Reuters puts it, this and other such radical Islamist groups “are also held up as heroes of the Libyan uprising by some locals who say they are doing a better job of the protecting them than the government in distant Tripoli.”

"These men are also people who fought on the front lines, care about their city and provide services. We can't shun them," said Benghazi University professor Iman Bugaighis, referring to several militias. "We had to ask them to come back and protect our hospital and streets."

Yes, they fought on the front lines with courage—Islamists often speak of sacrificing their lives in jihad and martyrdom—but the victory was handed to them by NATO, a NATO led by the United States, and a United States whose officials the Ansar al-Sharia killed perhaps because they were trying to get some of the weapons back.

But wait a minute! The current Libyan government is a client of the United States. Can’t the White House pressure the Libyan government to push forward the investigation? To detain those identified by witnesses as the attackers?

Or isn’t it trying? Perhaps it isn’t trying because it knows the Libyan government isn’t eager or isn’t able to confront the terrorists.

And the U.S. government doesn’t want to take direct action since that would presumably be too bullying and unilateral.

If this is what matters have come to, what can we expect from other Muslim countries in the Middle East with which the Obama administration has been dealing over the past 4 years and especially since the outbreak of the "Arab Spring"?

After all, Libya is a country that is not hostile to the US and is not being run by the Islamist radicals -- and yet the government there cannot do a thing to supporters of al Qaeda who murdered Americans. It is a client of the US and yet these terrorists are walking the streets of Benghazi in broad daylight.

What then will the US be able to expect from countries such as:

Keep in mind that the Obama administration still sees its support of the Muslim Brotherhood as a key ally against al Qaeda and in maintaining stability in the region.

Egypt is the gauge by which to evaluate the wisdom and success of such a plan -- a strategy that Obama will be following for another 4 years.

Email ThisBlogThis!Share to TwitterShare to FacebookShare to Pinterest
Labels: Benghazi, The Disaster of Obama's Policy In The Middle East

Because.....they don't have a permanent gig in the US working for CNN yet?