Will Samer Issawi be the next Palestinian Terrorist To Evade Justice By Cynically Going On A Hunger Strike?

In the midst of the huge coverage being given him as wrongly imprisoned by Israel, it is worth pointing out that Samer Issawi is in fact a Palestinian terrorist whose release as part of an exchange for Gilad Shalit was conditional on his staying in Jerusalem -- a condition he violated.

But the details of his record as a terrorist and the reason he is back in prison is not being widely reported.

In response to media shyness about Issawi's background, CAMERA provides some Neglected Facts About Hunger-Striking Prisoner:


As Palestinian prisoner Samer Issawi has allegedly exceeded more than 200 days of a hunger strike, Palestinian demonstrations and NGO activity on his behalf have intensified, and so too has media coverage. Though some media outlets have demonstrated great interest in Issawi's case, that interest is decidedly selective.

One example of the media's selectivity is from 2011, when The Guardian celebrated his release with a picture of Samer Issawi on horseback: 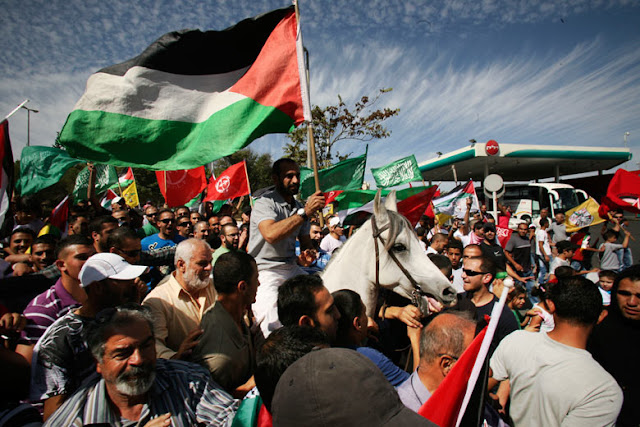 
Hundreds celebrate as Samer Tareq al-Issawi, one of the 477 Palestinian prisoners freed yesterday by Israel in exchange for the soldier Gilad Shalit, leaves prison in Jerusalem.

It was left to Amir Ofek of the Israeli embassy to do The Guardian's job and remind its readers that Samer Issawi is a terrorist:


Your centrefold (19 October) carries a double-spread photograph of released prisoner Samer Tareq al-Issawi in a cheering crowd, after being freed under the terms of the deal to release Gilad Shalit. It is important to point out the grave terrorism offences of which Al-Issawi was convicted, including firing a gun at a civilian vehicle in October 2001, indiscriminately firing an AK47 assault rifle at civilian buses, and manufacturing and distributing pipe bombs used in attacks on Israeli civilians. [emphasis added]

CiFWatch notes that as of yesterday, The Guardian's whitewash of Assawi continues as Information about Samer al-Issawi not provided by the Guardian. 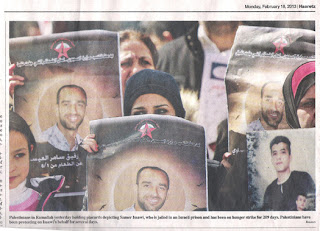 But the fact is that Issawi was released as part of a deal for the release of Shalit -- so why is Samer Issawi back in prison:

A deal is a deal -- and Issawi violated the conditions under which he was released.

CAMERA also notes that just as Issawi's terrorist activities and the reason for his return to prison have been minimized, the the extent of his hunger strike has been maximized.

According to the Associated Press, Issawi has in fact been eating solid food during his hunger strike:

Issawi’s sister, Shirin, said he has been on hunger strike for 206 days. She said he has only been drinking water since January. She said the prison takes her brother to an Israeli hospital for treatment.

The Palestinian minister of prisoner affairs, Issa Qaraqe, said Issawi began his fast in August and has been observing it intermittently.

Both Israel and the Palestinian minister agree that Issawi has been eating during his hunger strike.

Samer Issawi was originally imprisoned for attempting to murder Israeli civilians. After being released in exchange for Hamas hostage Gilad Shalit, Issawi violated the conditions of his release and is now back in prison.

Hunger strike or not, Issawi is clearly back where he belongs and should stay there.