Daniel Pipes on History of Turkish Airline Fashion -- And Its Implications

In an upbeat 2008 article, "When fashion meets the skies!" the in-flight magazine of Turkish Airlines (Türk Hava Yolları, abbreviation: THY), called Skylife, celebrated 75 years of stewardess fashion with pictures and prose. Some excerpts from the airline's fashion history:

Hostesses first graced our planes with their presence in the late 1940's. Since that day fashions have come and gone in Turkish Airlines' cabins, bringing everything from military-style uniforms to shocking pink mini-skirts, and now tulip motifs in shades of turquoise. …

When hostesses were first introduced bringing Turkish hospitality on board the planes, the importance of presentable cabin personnel was soon realized. It was a time when the silhouette of the elegant woman, born of the deprivation years following World War II, was at the forefront of world fashion. Turkish Airlines hostesses, who first took to the skies in 1947, therefore greeted their passengers with a degree of chic that make jaws drop even today. … 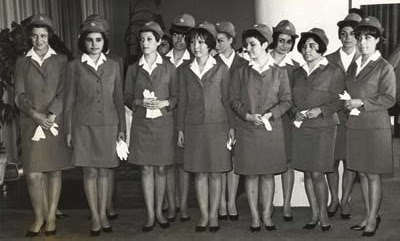 In line with the trend set by Mary Quant of London, Turkish Airlines hostesses' skirts suddenly got shorter in 1968 and, in a extraordinarily bold move, went from sky blue to shocking pink. Those uniforms, which our middle-aged passengers still remember today, were not very practical, but they did fit in perfectly with the spirit of the times by delighting customers with a youthful splash of color.
Turkish Airlines' uniforms changed too in 1973 when the blouses worn with the two-piece beige and tile-red suits were polka-dotted, reflecting the influence of Op Art. The hostesses of the day also wore brown workers'-style caps as fashion turned to the earth colors that signalled a more down-to-earth approach than that of the previous period. … 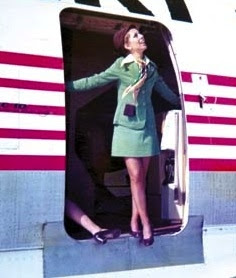 Turkish Airlines in 1989 adopted a red and blue hostess uniform in the form of a suit with either a red jacket and blue skirt or vice-versa. Following these uniforms, which combined the ostentation of red with the dignity of blue, the stark lines of the decade of the nineties began to leave their mark on Turkish Airlines as well. Since 1993 fashions have been more sedate, with hostess uniforms in tones of navy blue and turquoise. 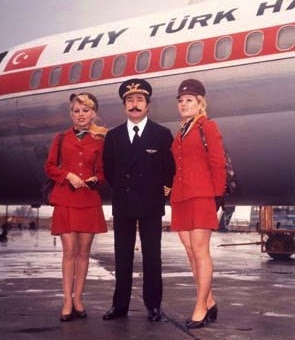 That was then. Now has the AKP era has descended on airline fashion, reports Hürriyet Daily News today in "New Turkish Airlines uniforms raise eyebrows":

The public has found the new clothing very conservative, stirring controversy on social media channels such as Facebook and Twitter. … The most-criticized parts of the uniforms are the hats. Some have claimed the hats – along with the whole outfit – are reminiscent of costumes in the Ottoman-era TV serial The Magnificent Century (Muhteşem Yüzyıl). … Daily Habertürk published comments from other Turkish designers, such as the famous Yıldırım Mayruk, who said Dilek Hanif's designs are nothing but a "joke." Designer Vural Gökçaylı said the clothes do not reflect Turkey. "The clothes look like they belong to Kuwait or Saudi Arabian Airlines.

However, they should reflect Turkey and Turkey is not this."

Comments:
(1) Those hats may look like sixteenth-century harem caps to some; to me, they resemble female versions of the fez, outlawed by Atatürk in 1925 and now making a surreptitious comeback.


(2) In miniature, this shift in fashion represents the larger imposition of piety throughout Turkish life by Erdoğan and his colleagues.
Once on the topic of THY, one of the more interesting and symbolic of Turkish institutions, a few more facts:
(February 10, 2013)