“Mr. President…over recent months, statements by your administration have similarly failed to address violations and have even blamed protesters and victims for violence committed in the context of demonstrations. Indeed, the stances of your administration have given political cover to the current authoritarian regime in Egypt and allowed it to fearlessly implement undemocratic policies and commit numerous acts of repression.”
Open letter to Obama from Bahieddin Hassan, director of the Cairo Institute for Human Rights Studies, quoted by Barry Rubin

In Obama to America: I'm Backing Democracy and Human Rights; Egyptian Human Rights’ Activist: No, You're Not!, Barry Rubin notes that in his State of the Union Address, Obama is expected to brag about his support for democracy and human rights in the Middle East:


But consider this amazing fact. Exactly two years ago there were massive demonstrations in Egypt against the Mubarak regime, which was a U.S. ally. Today there are massive demonstrations in Egypt against the Mursi, Muslim Brotherhood regime, which hates the United States and opposes its interests. The Mursi regime has killed more demonstrators than the Mubarak regime did during the comparable period.

Yet what a difference in U.S. policy! Two years ago the Obama Administration found this repression to be unacceptable. It demanded Mubarak’s immediate resignation and spoke of human rights and democratic norms. Today we hear none of that. On the contrary, the Mursi regime is praised by the White House and advanced arms are given as presents to it without delay.

So it isn't surprising that Bahieddin Hassan, director of the Cairo Institute for Human Rights Studies, has written an open letter to President Barack Obama. While many (most?) Americans think their country under the Obama administration has been supporting democracy and human rights in the Muslim-majority Middle East countries the people who live in those places know better. 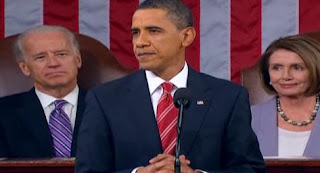 Other examples Rubin mentions of Obama's "achievements" in the Middle East include:
Read the whole thing.


We are continually told that Obama's policy has been supportive of democracy and human rights, and that people all around the world love him for it. While I know that polls can be cited--sometimes misleadingly--I have never met a single anti-Islamist Arab, Iranian, or Turk who thought that way. Come to think of it, the same applies to Central Europeans, Chinese, and a number of other nationalities.

Expect to be told again during tonight's State of the Union Address about Obama's support for democracy and human rights.
But keep Obama's actual record in mind.


Technorati Tag: Obama and State of the Union.

Email ThisBlogThis!Share to TwitterShare to FacebookShare to Pinterest
Labels: Obama's State of the Union Address, The Disaster of Obama's Policy In The Middle East