Rabbi Shafran On The Abuse Of Journalism


A number of years ago, a neighbor of mine, a business professional, shared a secret and a request. He told me that he had been found guilty of a crime – a dishonest financial reporting to the federal government – and was awaiting sentencing. He fully admitted that he had acted wrongly and offered no excuse for what he did. My neighbor is a kind, reasonable, family-oriented and charitable person. I drew on what thespian talents I had cultivated many decades earlier in high school, and feigned not being shocked.

“Oh, I’m so sorry,” was all I could say. Then came the request. “Could you write the judge a character reference letter?” he asked.

“Of course,” I answered, without hesitation. My neighbor’s punishment would have great impact on his future, his family and his friends. Here was a good man who did a bad thing. The judge knew about the bad thing; the least I could do was describe the good man.

And so I did, the next day. I’ll never know whether my letter, which acknowledged the crime and sought only to provide an honest assessment of my neighbor as a person, had any effect. He was sentenced to a year in prison and served his sentence.

What brought that memory to mind was the most recent example of “creative” reportage in a Jewish newspaper. “Orthodox Rabbi Defends Jewish Psychiatrist Convicted in… Assaults” read the headline of a report in the Forward on February 8.

Now what kind of stupid fellow, I thought, would defend the abusive actions of a doctor? When I saw the name of the rabbi, however, I realized that the headline had itself probably been abusive, of the truth.

Rabbi Yisroel Miller is well-known as a caring, sensitive, accomplished and respected leader of a congregation in the Western Canadian city of Calgary. He previously served a congregation in Pittsburgh and has been honored with rabbinic leadership awards by the Orthodox Union and the National Society for Hebrew Day Schools; he received a special award from the United Jewish Federation too, for his work to build bridges among diverse groups of Jews. He has authored four well-regarded books of essays on Jewish thought.

Ah, I thought, and now he’s defending the indefensible? No way.

Upon closer inspection, the Forward piece exposed itself as an example of something less than responsible journalism. Oh, pshaw, let’s be straightforward: it was make-believe muckraking.

What Rabbi Miller did, it seemed, was just what I did for my neighbor – and what innumerable rabbis, priests and ministers (not to mention friends, relatives and others) have done out of a sense of mercy and propriety: ask a sentencing judge to take their impressions and information into account when deciding the punishment for someone guilty of a crime.

And yet the article was not only headlined to make it seem as if Rabbi Miller had defended the criminal – which he hadn’t done; his letter is explicit and clear about that – but led readers to imagine that he had minimized the crime. The rabbi is introduced in a sentence recounting how the defense attorney characterized his client’s crimes as “minor offenses” and how he “then proceeded to read aloud from a letter from… Rabbi Yisroel Miller…[of] Calgary’s Orthodox synagogue.”

Perhaps, I thought, the article’s writer had just somehow neglected to quote whatever part of Rabbi Miller’s letter “defended” the accused. I searched in vain. The Forward report included details about the 74-year-old defendant’s conviction, and angry comments about him from various people. But the only portions of the letter quoted were the rabbi’s plea to the judge for leniency in sentencing the defendant, including his experience of the man as having always possessed a “humble manner,” the observation that “The bad does not erase the good” and the fear that “a prison term would be a death sentence” for the doctor (who was reported to be frail and in the early stages of dementia).

So I contacted Rabbi Miller directly, and asked to see the letter myself. He readily sent it to me and it was, as I had expected, nothing more than a plea for leniency. In it, he explicitly declares himself unqualified to opine about the defendant’s guilt or innocence and, equally explicitly, acknowledges the “darkness of the human soul” to which even otherwise good people can succumb. At no point in the letter does Rabbi Miller try to minimize the seriousness of the charge against the defendant; at no point does he in any way “defend” him.

I asked the rabbi how he feels about being maligned by a national newspaper. “I myself don't blame the Forward too much,” he responded, kind soul that he is. “After all, it’s their parnassa [livelihood].”

It’s All in the Angle (Torah Temimah Publications), a collection of selected essays by Rabbi Shafran, is now available from Judaica Press.

This essay may be reproduced or republished, unedited,
with the above copyright and note included. 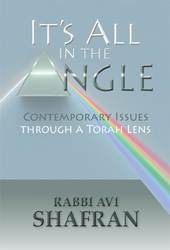 Consider a gift of literate, Torah-based perspectives for a friend, relative or co-worker.

Modern technology is both a help and a hindrance.
On one hand an old blog that no longer posts reminded us that we don't believe journalists who always slam Israel so why do we believe the ones that slam Chareidim?
On the other hand, as Rav "I think Bernie Madoff is a great guy" Shafran has repeatedly demonstrated, sometimes the bad news comes directly from the source without any filter.

After a quick check the only comment I found by Rabbi Shafran on the issue was:

"But there have certainly been cases in the Jewish community where guilt has been well established. Bernie Madoff may never have been Jewishly observant, but the Orthodox community has certainly had its share of fraud convictions, if on smaller scales, as well."