Obama's Sequestration Will Boomerang On Israel Too 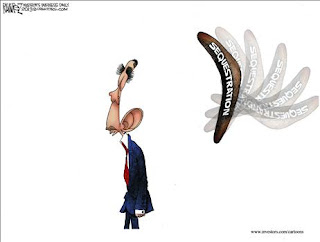 Sequestration is an idea that Obama has been busy disavowing since last year, as for example during the 3rd presidential debate -- a denial to which the Washington Post gave 4 Pinocchios in describing Obama’s fanciful claim that Congress ‘proposed’ the sequester:

No one disputes the fact that no one wanted sequestration, or that ultimately a bipartisan vote in Congress led to passage of the Budget Control Act. But the president categorically said that sequestration was “something that Congress has proposed.”

Woodward’s detailed account of meetings during the crisis, clearly based on interviews with key participants and contemporaneous notes, make it clear that sequestration was a proposal advanced and promoted by the White House.

In sum: Gene Sperling brought up the idea of a sequester, while Jack Lew sold Harry Reid on the idea and then decided to use the Gramm-Hollings-Rudman language (which he knew from his days of working for Tip O’Neill) as a template for sequester. The proposal was so unusual for Republicans that staffers had to work through the night to understand it.

Oddly, Lew in Tampa on Thursday, publicly asserted the opposite: “There was an insistence on the part of Republicans in Congress for there to be some automatic trigger…. [It] was very much rooted in the Republican congressional insistence that there be an automatic measure at the end.”

This prompted Woodward to go over his notes and interviews once again, to make sure he had gotten it right.

“After reviewing all the interviews and the extensive material I have on this issue, it looks like President Obama told a whopper,” Woodward said. “Based on what Jack Lew said in Florida today, I have asked the White House to correct the record.”

We had been wavering between Three and Four Pinocchios. But in light’s of Lew’s decision to doubledown on Obama’s claim, we agree it’s a whopper.

But this is more than Obama's attempt to pin sequestration on the Republicans in order to apply pressure on his opponents.

Apart from severe domestic repercussions  Obama's sequestration will have implications on US allies as well.

And one of those allies is Israel.

The Jewish Press notes that the Obama administration idea of the sequestration mechanism may hurt Israeli security:


The “Unbreakable Alliance” motto for President Barack Obama’s visit to Israel next month may be undermined by massive budget cuts in US aid for Israel’ anti-terrorist missile programs.

Pro-Israel sources report that the axe on the US budget may eliminate $479 million for joint US-Israel anti-missile programs, namely David’s Sling and Arrow systems, in addition to another $300 cut in military aid.

The slash in aid would come on the eve of President Barack Obama’s visit to Israel, which has been dubbed “Operation Unbreakable Alliance.”

Senior Israel officials are aware of the possible reductions and are trying to figure out to deal with them, according to Israel’s Globes business newspaper. Defense Minister Ehud Barak’s recent visit to Washington may have been, in part, an attempt to convince Congressmen to dull the axe on funding for the anti-missile programs.

...Congress and the White House have another week until the March 1 deadline, when either the federal deficit is reduced or automatic budget cuts come into effect, which could totally upset financial markets and America’s credit rating.

The article notes that the timing is such that the March 1 deadline that could activate sequestration would come before Obama is due to fly to Israel, creating a situation which would severely undercut the fanfare that is sure to accompany his attempt to play up his dedication to an “unbreakable alliance” with Israel.

Keeping with the boomerang theme, it is also important to note the importance of Iron Dome for the US in the war on terror, since Iron Dome's Battlefield Successes Point to Greater American Involvement


[Israeli liaison Lt. Col. Meyrav] Davidovitz explained to the audience of policy professionals, Congressional staff and Pentagon analysts, that, "Terrorist organizations around the world have the same capabilities as Hamas and Hezbollah, making the Iron Dome useful to all nations."

American acquisition of Iron Dome technology is "inevitable," asserted Randy Jennings, a defense consultant and former congressional staffer. He told the audience that it would fulfill America's future and current military defense needs in theaters similar to Afghanistan, as well as provide a proven system during a time of strained defense budgets.

Budget cuts that will inhibit the development of programs such as Iron Dome in Israel will affect the overall war on terror.


Technorati Tag: Israel and Sequestration and Iron+Dome and Obama.