Arlene Kushner on Netanayahu's Last Chance To Form A Coalition

Now I'm referring not to the state of the world, but to the state of Israeli politics.  I am so often proud of who we are. But now?  I would gladly grab hold of certain political shoulders and shake until the heads that sit on those respective shoulders rattled.  Where? I want to ask. Where is your devotion to the state and the greater good during these difficult times?
To whose shoulders am I alluding? There is, in my opinion, enough blame to go around.  No one that I'm seeing stands up as a leader (or even a potential leader), resolute in his vision, embracing his fellow Jews, and focused on the nation and not his own political future or that of his particular party.
Do I know what's in people's heads?  Not with any clarity.  Which makes posting difficult.
~~~~~~~~~~
On Friday, the coalition negotiations between Likud Beitenu and Habayit Hayehudi broke down.  These are the two parties that should have been natural allies, logical coalition partners.

Prime Minister Netanyahu has secured from President Peres another 14 days in which to form a coalition.   President Obama has said if a government is not formed by the 16th of this month, then he will cancel his trip, scheduled for the week after.
Today the prime minister met with Shas. There had been reports that he absolutely refuses to exclude them because of Bennett-Lapid demands.  And there have been other, more recent, reports that he told Shas he wants to include them, but that because of Bennett and Lapid, it will be difficult to do so.
Following this meeting, Netanyahu had a long meeting with Bennett, which is being described by members of Habayit Hayehudi as "positive and productive." There was discussion of the party joining the coalition, although there is at yet no announcement.
~~~~~~~~~~
I am reluctant to repeat rumors or level charges that are no more than hearsay, and yet I feel I must at this point give my readers some window into what is going on here.
By way of a re-cap:
Fault lies first with Netanyahu who ran a regrettable campaign.  The lack of vigor with which he and his party campaigned resulted in fewer mandates for Likud-Beitenu than had been expected and plenty of anger within Likud circles.
What is more, Likud ran a very negative campaign, with the negativity leveled first and foremost against Habayit Hayehudi.  This was stupid and counterproductive.  There are rumors, which apparently do have some basis in fact, regarding bad blood between Netanyahu and Bennett, head of Habayit Hayehudi, who once worked for Netanyahu.
However, what has been the case, as well, is that Bennett's posture as an up-and-coming leader in the nationalist camp threatened Netanyahu -- who has exposed his insecurities.  Compared with the previous strength of the "old" Habayit Hayehudi (aka the National Religious Party), this new incarnation with Bennett at its head was demonstrating great promise in the polls and it was looking as if Likud was at risk of losing voters to Habayit Hayehudi.
Thus apparently did Netanyahu level criticism against Bennett.  His hope, surely, was that disenchanted potential Habayit Hayehudi voters would turn to Likud.  What I see is that, seeking a new young face, they instead moved over to Lapid and Yesh Atid.  Netanyahu bears some responsibility for the 19 mandates Lapid garnered.
~~~~~~~~~~
Since the coalition negotiations began 28 days ago, there are only two discernable facts we can point to:
First, Netanyahu brought Tzipi Livni on board and gave her an incredible amount of power -- Justice Ministry and responsibility for negotiating with the PA -- for her six mandates.  A very foolish move that I have already described as a betrayal of the principles of many inside the Likud-Beitenu faction and of those who voted Likud-Beitenu.
And then, the partnership, the "mini-coalition" of Bennett (on the right in the picture) and Lapid. At first this was no more than suggested by rumor, but the fact of this agreement has become clear in recent days. 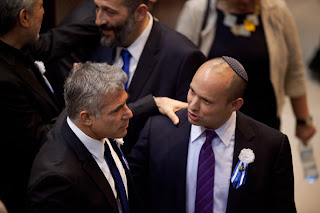