We are still waiting for Hanan Ashrawi, Palestinian spokesperson, to respond after the vicious Antisemitic article published by her organization, MIFTAH.

Established in Jerusalem in December 1998, with Hanan Ashrawi as its Secretary-General, MIFTAH seeks to promote the principles of democracy and good governance within various components of Palestinian society; it further seeks to engage local and international public opinion and official circles on the Palestinian cause. To that end, MIFTAH adopts the mechanisms of an active and in-depth dialogue, the free flow of information and ideas, as well as local and international networking.[emphasis added]

The key paragraph in the article is:

As Elder of Zion notes, the author of the article -- who assures us he is a "researcher specializing in Israeli affairs" quotes an Haaretz article by a Bar-Ilan University professor who claimed that a few blood libels could have had a basis in fact, without at the same time revealing that the professor recanted those claims later.

Algemeiner notes that Ashrawi and MIFTAH are trying to avoid the issue:

MIFTAH has already removed the offending page. Obviously that is not enough. MIFTAH must immediately acknowledge the vile racism that appeared on its website and publicly repudiate it.

More importantly, Hanan Ashrawi -- as the head of MIFTAH -- owes Jews an apology for this horrific insult that was purposely published on Passover.

Elder of Zion also has a list of the donors to MIFTAH, which show that US groups contribute to MIFTAH and enable this kind of Antisemitism

UPDATE: NGO Monitor has a list of funding for MIFTAH from 2011:

Both the original article in Arabic and the Google translation are below. 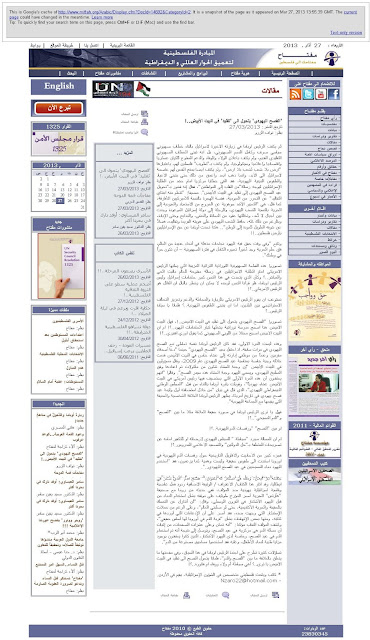 Here is the Google translation of the original Arabic article:

Not only did President Obama during his recent visit to Israel to deliver a speech Zionist political exchange and full-fat Zionist, but he adopted Zionist discourse old traditional, not only to declare allegiance and loyalty, and open support of the entity militarily, economically and in the media and psychology, not only to "beatification" Palestine them, as "Land without a people for a people without a land ", not only also grant Jerusalem them the capital of Israel forever, but went further and deeper than that even adopting the holidays and religious rituals of Judaism, has delivered a speech centrally in front of a crowd of Israeli students to send a message" from the heart to the citizens, "he said he was proud to "convert the Jewish Passover tradition in the White House."Adding: "learn from it daughters traditions" for freedom from slavery, story of migration for African Americans, he said, is to "express the most fundamental way out of slavery and slavery to freedom for the Jewish people, and the journey to the State of Israel promised found between generations is not, and punctuated decades of suffering and exile, massacres and even genocide, and in spite of all that, the Jewish people maintained its unique identity and traditions, as well as long yearning to return home ".. Thus, Obama spoke of the right of Israelis to the land of Palestine ..!!

"At the time when it has achieved stunning successes Jews in many parts of the world, the dream of freedom finally found full expression in the idea of Zionism - to be free at home."

Imagine this piece Zionist biblical heritage counterfeit announced by U.S. President front of students Israelis in an open letter to the world broadcasting live and direct ..? And who was speaking in this text is the Chief Rabbi of Israel and not President Obama, if we read the text alone can not springs to mind that the view is the U.S. President ..?!

Understand that the U.S. President to visit and courtesy, support and strengthen the strategic alliance between the two countries, either to adopt Jewish rituals ..? Why, Mr. President ..?

This is not the first time, it was President Obama himself dealt with the Jewish Passover on previous occasions, as celebrated "Passover" when "called close friends and a number of staff managed to a private dinner at the White House provided through a special meal on the occasion of the Jewish Passover holiday in 2009 , said White House officials "The dinner consists of food have been prepared according to Jewish cuisine, and called Jews and dinner this Seder Passover." and said, "They believe that this the first time that hosts the U.S. president in the White House dinner Jew", and met with a gesture Obama commended by the "National Jewish Democratic Council," which he said in a statement, "through hosted the first feast of Passover Jews in American history, President Obama appears deep personal relationship and that would be built with the Jewish community."

Could it be that President Obama in fact image relationship, for example, between "Easter" and "Christian blood" ..?!

Or is it just a matter of "courtesy" of the Jewish Council to please him or to atone in front of him for remarks on "two-state solution" and the media escalation studied ..?!

This fact came to the San Jewish historian Professor "Ariel Toiv" of Bar-Ilan University, in issuing him entitled: "Passover blood" which was released in Italy, has raised this book / recognition / document additional backlash and harsh Israeli Jewish against the author, In his speech from Rome with the newspaper "Haaretz" Hebrew insisted of Toiv on his position on the use of blood by Ashkenazi Jews in the Middle Ages, and said: "I will not give up on the stick to truth and academic freedom, even if Sbanna the world," despite the campaigns condemnation that guided against him, has insisted that the claims made in his book, including some accusations about "blood libel in Europe have a real basis", and the author reveals unveiled stressing: "it enables the dozens of pages, to prove that the issue of blood is central to the festival of Passover, and reach to the conclusion that the use of blood at Easter, especially among Ashkenazi Jews, who believed the existence of medical benefits for the blood of children, and it has used powders made of blood. "

Many questions put on the agenda of President Obama in this context, and in the forefront with regard to the relationship between the "Easter and blood", so why Easter turns into a tradition in the White House, I wonder ..? Is it a compliment or loyalty and meet or bill ..?!

Yes, yes she does. It's always a mistake to imagine that these people are not evil and insane. Because they are.