I was going to send this posting out yesterday.  It was substantially written. But, I saw that there had been progress in the negotiations on the coalition -- it was looking more rational, more hopeful.  That is, according to credible rumors.  And so I thought if I held off a bit I might be able to announce a government. Silly me.

From rumors of "very close" we suddenly moved to an announcement of a breakdown in the negotiations.
At this point I am pointing my finger at Lapid.  Likud is accusing him of reneging on an agreement that had been reached, and Bennett is saying that what Lapid is now demanding with regard to draft regulations would hurt nationalist yeshivas and is unacceptable to him (i.e., Bennett). There have been round the clock negotiations aimed at coming to a final agreement, but as I write, still no resolution. More talks are scheduled for tonight.

I had pegged Lapid from early on as someone too sure of himself, too arrogant -- exhibiting neither a willingness to compromise (which is what politics is often about), or to understand that changes don't happen all at once. He's about "fixing" everything immediately (as he perceives the need to do fixing) because he got 19 mandates.

It is likely that a coalition will come together in short order.  Netanyahu has only until this Shabbat and he's out of time. What we must wonder, however, is how long a coalition that has such tensions built into it can remain stable.

What I will mention here is that the names being floated for various ministries have me more hopeful than I had expected to be at this point.  All specifics will follow when the assignments are announced.  It's being said that Lapid wants to be Finance Minister.  That would be regrettable, for as far as I can discern, he knows zilch about financial management; Yuval Steinitz (Likud) has done a fine job in that department and really would like to retain the post.  And there's talk about dissension over the education ministry, which Gideon Sa'ar (Likud) has managed exceedingly well.

The issues of the Finance and Education Ministries are two instances of a problem that has arisen:  As members of other factions are being considered for a number of major posts, members of Likud are disgruntled and feeling left out, ironically even as theirs is the ruling faction.  The problem of ministry assignment is exacerbated by the fact that part of the coalition negotiations involves reducing the number of portfolios.

To add to the problem, some of the younger members on the Likud list, serious vote-getters (I have in mind Tzipi Hotovely, pictured), are being passed over by Netanyahu for old guard cronies.  This is not sitting well with those whom the prime minister would ignore. 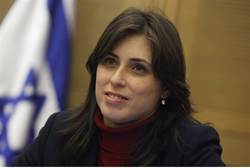 What a business this is!

As the clock on the coalition negotiations ticks away, Netanyahu surely has the coming visit of Obama in mind.  Meanwhile, the president is making his own preparations for coming.  Significant among those preparations is an off-the-record meeting he had with close to 24 American Jewish leaders last Thursday, during which he assured them that he wouldn't be bringing a peace plan with him.

According to reports from participants of that meeting, when asked what actions he will take to stop Iran, Obama said:

"I’m not going to beat my chest to prove my toughness on this."

He then provided a quote, frequently attributed to a Chinese military tactician, regarding the need to give "a golden bridge" to a "proud people" in order to provide them with a face-saving way to retreat to a diplomatic solution.

So...Obama's still being Obama, still clinging to his fantasies.  His refusal to beat his chest, figuratively, comports with his routine refusal to be tough, insisting that enemies can be won over better with kindness.
Why he imagines that the Iranian leaders are looking for a face-saving way to retreat to diplomacy is beyond me, and what I worry about is what "golden bridge" he hopes to offer them.

About the same time that Obama was talking about giving the Iranians a chance to step down to negotiations, Ayatollah Ali Khamenei was declaring that Western nations had only acknowledged a "fraction" of Iran's nuclear rights. "Western nations did not accomplish anything that can be construed as a concession" -- which, of course, he insists Iran is entitled to.


"On the eve of President Obama’s first visit to Israel as chief executive, I have just returned from briefing a high-ranking official of country x about the Middle East. We kept coming back to a vital theme: the incredibly shrinking power of the United States. Try to explain American behavior to neutral, open-minded third parties for whom U.S. policy activities have become just plain bizarre!

"...there’s been for all practical purposes a profound–albeit possibly temporary–transformation in the governance of the United States. Regarding foreign policy, all the old rules don’t apply—credibility;punishing enemies and rewarding friends..."

Read: Why, As President, Obama is a Disaster and Why, As a Country, Israel Should Applaud Obama

The Palestinian Arabs in PA areas are also preparing for the Obama visit to the region.  Activists associated with a group called "Palestinians for Dignity" are calling for "huge demonstrations" because Obama's policies are "supportive of the occupation."  They said he was "persona non grata in Palestine" because of US support for Israel.  And they are calling for "demonstrations against the idea of returning to the negotiations."

Will Obama also offer them a "golden bridge"?

~~~~~~~~~~
For his part, Hamas leader in Gaza Ismail Haniyeh has declared Obama's visit a "trap" and calls upon Abbas not to fall into it:

"We are convinced that Obama’s visit will not produce the necessary breakthrough for our people."

Obama’s visit "will focus on regional developments and will only address our cause in a way to undermine Palestinian national reconciliation efforts and to relaunch the absurd so-called negotiations."

Read: Haniyeh: Obama Israel Trip a 'Trap' for Hamas, PA
~~~~~~~~~~
Haniyeh's assessment of Obama's intentions is, of course, on the mark. What's noteworthy here is that this statement by a Palestinian Arab leader with whom Abbas is supposed to be negotiating "unity" makes it harder for Abbas to accept Obama positively.  He will be labeled a traitor, one who sacrifices the good of the people in order to please the American president.
In other words, radical is "in."
~~~~~~~~~~
On Friday, the Muslim Sabbath, following afternoon prayers at the mosques on the Temple Mount, worshippers began throwing rocks at the Israeli officers stationed at the Mughrabi Bridge -- this is the bridge that runs between the Western Wall Plaza and the Mughrabi Gate, the only gate available for non-Muslims to enter the Mount.

When Israeli police entered the Mount, rioters not only threw rocks at them, but also two fire bombs.   Six of the police required hospitalization for treatment.

Situations such as these are not only enraging but remind us how badly we have lost sovereignty over what is rightfully ours.

The situation in Syria, right at our border, is escalating.  IDF soldiers can hear guns firing, and see the battles.

Last Wednesday, 21 Philippine peacekeepers were kidnapped by the Martyrs of Yarmouk rebel forces in an attempt to force Assad forces to withdraw from the Jamla area.  The peacekeepers were part of the UN Disengagement Observer Force (UNDOF) that has been monitoring a ceasefire line between Syria and Israel in the Golan Heights since 1974.  They have now been released to Jordan, but there is talk of the UN force withdrawing.

Now rebels operating near the Golan border have vowed to "liberate" the Golan from Israel after Assad has been taken down.  Assad, they have declared, is severely remiss for not having done this a long time ago.

According to Ayal Zisser, former director of the Dayan Center for Middle Eastern and African Studies:


"A significant number of the rebels in the Golan Heights area belong to the al-Nusra Front, an al-Qaeda affiliate, but alongside that group are a whole host of other armed militias. These groups lack a central leadership and are mainly composed of outlaws and bandits out for a fight. These gangs seek control of the rural regions and the Syrian periphery."

There is a reasonable anticipation not simply of trouble on the Golan border with Syrian rebels, but with Hezbollah, which is surely acquiring advanced weapons from Syria in the midst of the current turmoil.

What I repeat here has been said before, and I consider it of the utmost importance in terms of Israeli policy.  Last week a senior IDF officer, who declined to be identified, said:

We want to preserve the quiet, and we want the other side to know that if they take a step that necessitates we exact a price, they will pay dearly.


"The way they behave will have repercussions on the population and infrastructure of southern Lebanon.

The officer said Israel would try to give Lebanese non-combatants time to evacuate, but recognized that there would be non-combatant casualties.

This is all about the despicable, the immoral, habit -- engaged in by Hezbollah and Hamas equally -- of deliberately storing weaponry and establishing rocket launching sites in civilian areas, assuming that Israel will be afraid to hit those areas.  But the more Hezbollah has sophisticated weaponry that can do serious damage to the Israeli population, the more important it becomes for the Israeli military to take out that weaponry before many Israelis can be killed.  Intentions are to act very fast indeed.

The moral responsibility for this situation falls on Hezbollah shoulders.  Israel responsibility is to the lives of Israeli citizens.  Bad press cannot be a factor here.

We know full well how quickly the world points a finger at Israel.

During Operation Pillar of Defense in November, two of the Palestinian Arab dead were the baby son of a BBC Arabic Service journalist and his 19-year-old sister-in-law.

A Times of Israel reports,


"Images of the bereaved father tearfully holding the corpse of his 11-month-old baby went around the world."

And Human Rights Watch declared that according to "news reports and witnesses," Israel was responsible.

Well, guess what?  A UN report now says that it was a Palestinian Arab rocket that killed the child and the woman.  The UN.
Read: UN clears Israel of charge it killed baby in Gaza


Technorati Tag: Israel and Netanyahu and Iran and Obama.