Oh-Oh! Attorney General Eric Holder Wants To Apply Saudi Justice in the US!

The Saudi Gazette reports that US shows interest in Saudi counter-terrorism program -- but the discussion, led by US Attorney General Eric Holder, turned to the justice system in Saudi Arabi in general.

And that is when Holder started getting scary: 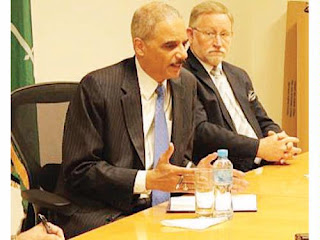 “During this visit to Riyadh, I have had discussions with our Saudi partners about our joint programs to promote the rule of law and protect the rights and interests of our citizens,” he said.


Holder also expressed his enthusiasm for building programs supporting the Kingdom’s enactment of legal reforms and the continued dialogue between the two nations on the subjects of judicial and legal progress.

“I’ve also been impressed by the Justice Minister’s efforts with regard to the justice system here in this great nation. We have exchanged ideas and thoughts,” he continued, “and my hopes would be that some of the things we’ve tried in the United States may be useful here in Saudi Arabia and some of the ideas that the Justice Minister shared with me, I think, will be productive in the United States as well.” [emphasis added]

This Ongoing War blog found this as outrageous a statement as I did and in Know the Neighbours: Saudi Arabia, gives a list of numerous examples illustrating just what kind of justice system Holder is praising. Here is just one, after giving examples of human rights activists in Saudi Arabia who were sentenced to 10 years imprisonment:
Read the whole thing.

So when Eric Holder tells his Saudi hosts that:


some of the ideas that the Justice Minister shared with me, I think, will be productive in the United States as well.

Do we have reason to be afraid?

it below. Thanks!
Technorati Tag: Eric Holder and Saudi Arabia.

Sounds like we're getting a jihadi extension to Obamacare to cover the extra payoffs and 'counseling' and such under the aegis of a social or mental disease. Of course it will be run in the US by the Muslim Brotherhood and within a year a dozen or two of them will be picked up by the FBI for trying to bomb various buildings.