When Will The New York Times Stop Whitewashing Palestinian Terrorism? 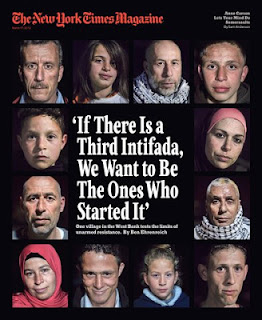 In describing the latest New York Times attack on Israel, Arnold Roth of This Ongoing War blog writes about A little village in the hills, and the monsters it spawns:


If you want to affect how people think about an issue, putting your case onto the cover of the New York Times Magazine must be one of the most effective things to do. And, given the intense competition, one of the hardest.

So if the editors of the NYT (108 Pulitzer Prizes, more than any other news organization; 30 million unique visitors per month to its website; the largest local metropolitan newspaper in the United States – according to Wikipedia) give you the cover of the prestigious Magazine, it’s a massive vote of confidence, a huge privilege, a platform of the most effective kind that (probably) can't be bought for money.


Friends have pointed us to this week’s NYT Magazine cover story, published today. It’s devoted to a Palestinian Arab village set in the hills a few kilometers north of where we live in Jerusalem. It's a place the author calls “spirited”, where “on warm summer evenings, life… could feel almost idyllic. Everyone knows everyone.” He says “a pilgrimage” to this magical place “has achieved a measure of cachet among young European activists, the way a stint with the Zapatistas did in Mexico in the 1990s”.

How can you not be captivated?

Indeed, how can one not be captivated by the New York Times whitewash of terrorism?

The author of the piece is Ben Ehrenreich. His fellow New York Times contributor, Joseph Levine, has parroted such pro-Palestinian propaganda as:


During the 1950s, thousands of Palestinians attempting to return to their homes and farms were shot on sight, which, not surprisingly, gave rise to terrorist attacks by Palestinians against Israeli targets.

Ehrenreich is also not above repeating the claims of his interviewees uncritically. Bassem Tamimi regrets the Palestinian use of terrorism as a "big mistake" -- because it has not worked. But Tamimi does not regret all such acts:


About the lethal rock-hurling attacks directed at Israelis, Bassem Tamimi says he didn’t worry over whether stone-throwing counted as violence. The question annoyed him… If the loincloth functioned as the sign of Gandhi’s resistance, of India’s nakedness in front of British colonial might, Bassem said, “Our sign is the stone.” The weekly clashes with the I.D.F. were hence in part symbolic. The stones were not just flinty yellow rocks, but symbols of defiance… The message they carried, he said, was “We don’t accept you.”

Roth points out the harsh reality which Ehrenreich glosses over:


Stone-throwing as a symbol? People have been killed and (as recently as this past Thursday) critically injured by the rocks (and cement blocks and boulders) of the 'stone' throwers. Perhaps "we don't accept you" is what people living far from the scene imagine goes through the minds of baby-killers and restaurant bombers. But living where we do, innocent-sounding turns of phrase like that leave us dumbfounded.

Keep in mind the long history of Arabs throwing rocks at Jews. In Jews and Arabs: Their Contacts Through the Ages, S. D. Goitein wrote in 1955:

When may we expect The New York Times to give equal time to other extremists, such a David Duke?

But of all of Ehrenreich's omissions, the most egregious may be his whitewash of Palestinian terrorism. Roth writes:


Half-way through today's essay, he introduces a figure who embodies that “big mistake”:


In 1993, Bassem told me, his cousin Said Tamimi killed a settler near Ramallah. Eight years later, another villager, Ahlam Tamimi escorted a bomber to a Sbarro pizzeria in Jerusalem. Fifteen people were killed, eight of them minors. Ahlam, who now lives in exile in Jordan, and Said, who is in prison in Israel, remain much-loved in Nabi Saleh.

That's all he writes about Ahlam Tamimi but we can tell you more. She is a Jordanian who was 21 years old and the news-reader on official Palestinian Authority television when she signed on with Hamas to become a terrorist. She engineered, planned and helped execute a massacre in the center of Jerusalem on a hot summer afternoon in 2001. She chose the target, a restaurant filled with Jewish children. And she brought the bomb. The outcome (15 killed, a sixteenth still in a vegetative state today, 130 injured) was so uplifting to her that she has gone on camera again and again to say, smiling into the camera lens, how proud she is of what she did. She is entirely free of regret. A convicted felon and a mass-murderer convicted on multiple homicide charges, she has never denied the role she embraced and justifies it fully.

Yet all the NY Times says about Nabi Saleh’s favourite one-time resident is that she was an escort “who now lives in exile in Jordan”. Period. This is no mere oversight. The editors at the New York Times showcased this same psychopath once before, six years ago. Then, as now, we felt someone needed to push back and we posted two blog articles: “7-Aug-07: Hot House: Cold Truths” and “28-Jun-07: About sweet-faced young women”, and got a little attention for a while. But it was clear to us that those who thought they perceived greatness of spirit in the woman continued to do so.

One of 8 children murdered by the "much loved" Ahlam Tamimi was Roth's daughter Malki.

The New York Times romanticized view of Palestinian terrorism consistently overlooks the violence and bloodshed that has resulted from these orchestrated events.

Unfortunately, the New York Times is more interested in fawning over those who want to create the violence than the innocent civilians who will suffer as a result of it.