Actually, outrage upon outrage upon outrage.  What a day.
Let's start with the coalition formation and Lapid.  With all of the concessions Netanyahu had made for him, it was not enough.  Lapid wanted Rabbi Shai Piron, second on the Yesh Atid list, to be Minister of Education and Netanyahu wanted Gideon Sa'ar to retain that position.
There were several issues at stake, beyond the matter of which party controlled that important ministry:

Netanyahu was concerned that the yeshivas, which are under the umbrella of the ministry, would not get a fair shake from Yesh Atid; to that end, Bennett, whose party, it seems likely, will control Ministry of Religious Affairs, petitioned for the yeshiva budgets to be moved to its jurisdiction.
Meanwhile, Lapid was going on about how the future of the country depended on control of the Ministry of Education.  He's not wrong, and that's just what I'm worried about. What future for the country does this arrogant man have in mind?
Oh, and we should not forget that he had promised Rabbi Piron that, if he joined the Yesh Atid list, he would be Minister of Education. Excuse me?  How did he make such a promise?
And so, yes, I found the situation outrageous in several particulars.
The high drama went on over the course of the day. 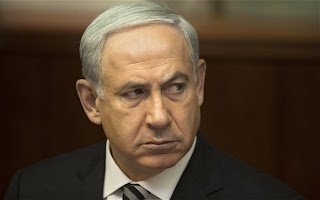 Credit: telegraph (uk)
Needless to say, the prime minister was greatly irked.  "Take what you have or leave it!"  he reportedly said to Lapid at one point.  Calling him "inflexible," he warned, "You're not getting the Ministry of Education."
Reports went out about Netanyahu beginning negotiations with Shas, assuming that Lapid might well be out of the coalition.
Bennett did shuttle diplomacy, trying to bridge the differences and counseling compromise.  But from a Habayit Hayehudi source came the quote:

"All hell is breaking loose.  Lapid thinks Bibi will fold, but Bibi won't.  It's a game of chicken gone wrong."

~~~~~~~~~~
But guess what?  Bibi DID fold. And as far as I am concerned, that too is outrageous.  It seems to be his MO.  Perhaps Shas was holding him up for too much, imagining the coalition would depend on them.  Perhaps Netanyahu was beside himself because he had no government, time was almost up, and Obama was coming.  Perhaps there are compromises in other areas that are not yet clear.
Perhaps.  Perhaps. But dearly do I wish the prime minister had not caved before Lapid.  I don't like what I see coming down the road with him.
What seems to be the case is that there will be 68 mandates in the coalition, with Mofaz not included.  All agreements are not finalized yet, and so at this point there is little more to report.  A government will be announced soon enough and particulars will become clear.
~~~~~~~~~~
One of the things we apparently do know now is that MK Uri Ariel (Habayit Hayehudi) will be Minister of Housing, which is most welcome information. (There indeed will be some things to celebrate in the new coalition.) 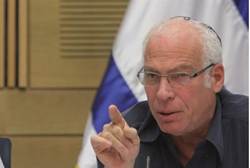 Credit: Flash 90
But here's the outrage: Robert Serry, a UN envoy, and really bad news, publicly made a statement about how regrettable this was, for it would mean more housing in Judea and Samaria and cause Israel international condemnation.
Someone asked his opinion?  Would he do this with any other sovereign nation?  MK Ariel's assumption is that Serry made this statement before ministry assignments were announced in hopes of reversing the situation.
~~~~~~~~~~
And this is even more outrageous, by far:
Obama, during his visit here, will be addressing students in the International Convention Center (Binyanei Ha'uma) in Jerusalem.  Students from every university in Israel were invited, except from Ariel University.
Why?  Clearly because Ariel, a very fine university and fully accredited, is -- shock and horrors! -- over the Green Line.
MK Yoni Chetboun (Habayit Hayehudi) met with students from the university, who expressed their anger, and then wrote a letter of protest to US Ambassador to Israel Dan Shapiro.
If the Embassy action on behalf of the president is not reversed, Ariel students intend to go into Jerusalem and protest outside during Obama's talk.
~~~~~~~~~~
Tzipi Livni, who has been pegged by Netanyahu to do negotiations with the PA, spoke yesterday at the Herzliya Conference.  She said:

It is "critical for us to reach a final status agreement" [with the Palestinian Arabs]...
"In the negotiation room we need to stop talking about who has the greater right to be here."