Today is the anniversary of 9/11. May every year come with America burning.
Samira Ibrahim, recipient of the Secretary of State’s International Women of Courage Award


On Friday March 8, Michelle Obama will join John Kerry at a special ceremony at the State Department to present ten women the Secretary of State’s International Women of Courage Award. The award, says the press release, is given to “women around the globe who have shown exceptional courage and leadership in advocating for women’s rights and empowerment, often at great personal risk.”

Five of these awards are being given to women from Muslim-majority countries, underscoring the unique plight of women in those countries. The only problem is that one of the women to be recognized is an anti-Semite and supports the 9/11 attacks on the United States.

That woman is Samira Ibrahim.

The State Department describes describes Samira Ibrahim as "among seven women subjected by the Egyptian military to forced virginity tests in March 2011" and in a press release notes that Ibrahim “was arrested while in high school for writing a paper that criticized Arab leaders’ insincere support to the Palestinian cause."

The State Department apparently did not vet the award recipients very carefully. If it had, the State Department would have found that Ms. Ibrahim has been very busy on Twitter -- rejoicing in the murder of Jews:
With her award about to be given, Ibrahim made a weak effort on Wednesday to distance herself from her comments by tweeting:

As Tadros notes, Ibrahim has never made any mention before of her account being stolen -- nor has she removed her antisemitic and anti-American tweets from Twitter.

It is an embarrassment for the US in general and the Obama White House in particular to be giving such a reward to a woman so obviously undeserving.


This is where the story gets even stranger. Tadros, in The Weekly Standard, wrote on Tuesday -- the same day the Holocaust Museum told the State Department about Ibrahim's tweets -- that, "Just today, apparently after having been warned that her vicious tweets might cause her trouble during her visit to the U.S., she has written on twitter: 'My account has been previously stolen and any tweet on racism and hatred is not me.'" Tadros went on to write, "However, in the past she never made any mention of her account being 'stolen.' The record of her anti-Semitic tweets is still available online."

It is entirely possible that her account was hijacked. These things happen all the time. But the tweets in question appeared over many months, and she is a regular user of Twitter. I've asked a State Department spokeswoman about this, and will report back when I hear from someone. I've also been trying to reach Ibrahim herself. The obvious question: Did the State Department look at Ibrahim's feed before it was decided to give her this award, and did the State Department ascertain that she was indeed the victim of a Twitter hijacking?

Hannah Allam is a journalist with McClatchy Newspapers.


Now, it’s pretty unusual to use a hacked account on a phone. If someone had gone to the trouble of compromising Samira Ibrahim’s account and then using their access to tweet incriminating statements over a period of months, they’d be more likely to use a computer behind some sort of proxy.

Nevertheless, the proof is not ironclad, since it could be an coincidence that she and the hacker use the same apps.

Still, there are other indications that Ibrahim is lying when she says she did not write those tweets:


The tweets were sent over a period of a few weeks, and in the meantime she was active on Twitter as usual. And, when she referenced ‘Jews’ in the Saudi tweet, another tweeter helpfully contacts to her to suggest she uses ‘Zionists’ or ‘Israelis’ in the future. Samira (or the supposed hacker) replies to this suggestion politely saying she would learn from it!

For now, the State Department is better off not having made the decision to defer giving the award to Samira Ibrahim.

UPDATE: The State Department has removed Samira Ibrahim from its website:

On its original list of Secretary Kerry To Honor Ten Women of Courage on International Women's Day, Samira Ibrahim's name appears second of the 10 women honored: 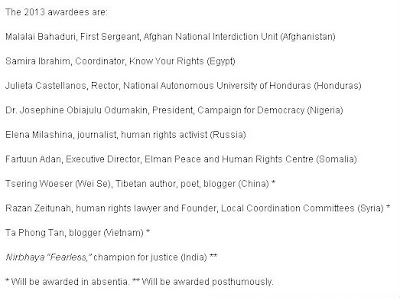 Now if you check that page, there are only 9 women listed: 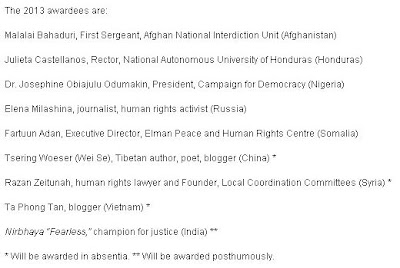 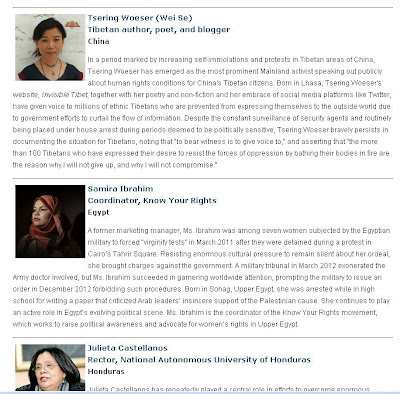 But not any more: 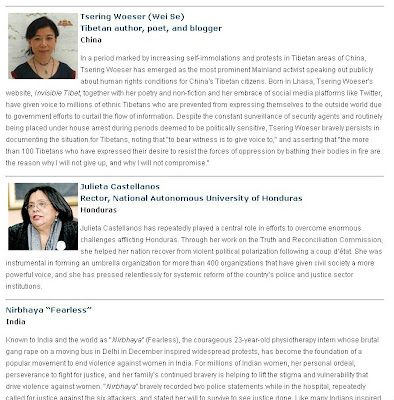 Samira Ibrahim is listed as the coordinator for Know Your Rights.
Apparently, she forgot she had the right to remain silent.

UPDATE: Seth Mandel writes about Kerry’s “Courage” Award Debacle, noting how the revelation of the State Department's failure to properly vet the recipients of the award diminishes it:


Presumably the others will still receive their Women of Courage awards, but this incident will likely dim their excitement. After all, the fact that the State Department is conferring this honor on them doesn’t seem to mean the State Department actually knows anything about them.

But then again, we already knew that vetting people is not a strong point of this White House.


Finally, Ibrahim herself has spoken, writing in Arabic on her Twitter page. Egyptian democracy activist Mina Rezkalla provides the translation:


"I refuse to apologize to the Zionist lobby in America regarding my previous anti-Zionist statements under pressure from American government therefore they withdrew the award.”

This would seem to settle the question as to whether or not her page had been “stolen.” Now all that’s left is for the State Department to demand that Ibrahim reimburse American taxpayers for her trip to the United States.

I'm sure that will impress Ibrahim's friends and fans -- but it is a cop out.
She apparently did not apologize for voicing her approval of 9/11.