Is Obama Keeping Pollard In Prison Because His Release Won't Get Him Jewish Votes?

The printed, not online, edition of Haaretz yesterday claims that Obama's main consideration in releasing Pollard is whether it will get him more of the Jewish vote--not issues of justice or Pollard's illness.

Haaretz Printed edition 11 April 2012 report - White House source explains that President Obama only considers how many votes he could gain from releasing Pollard - no mention of either humanitarian considerations or question of justice. Indicates Pollard release could be part of peace process.

The English and Hebrew internet edition do not include any of these observations.

Dr. Lerner has a screenshot on Facebook of the Haaretz article (Hebrew) about Obama's political reasons for refusing Pollard clemency: 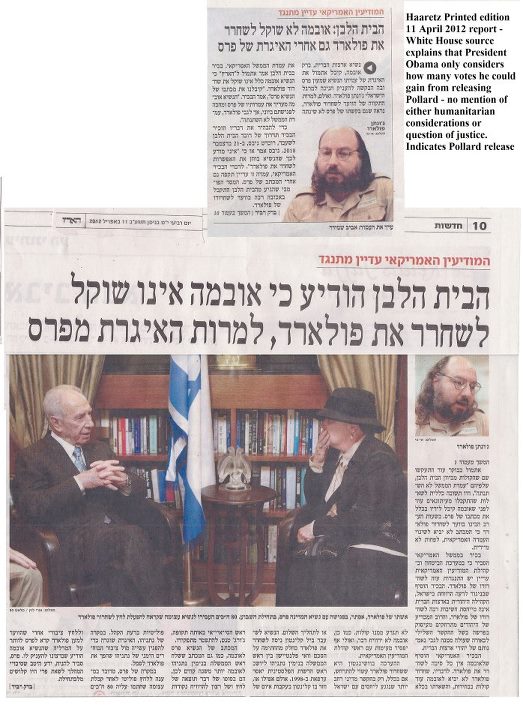 Israel Matzav summarizes the main point of the article as to why Obama is refusing clemency for Pollard:


It says that Obama does not believe that American Jews are concerned about Obama like Israelis are, and that there is no chance that Obama will release Pollard unless he believes it will gain him votes.

Israel Hayom has an article today giving a different reason for why Obama will not release Pollard:


According to Deputy Foreign Minister Danny Ayalon (Yisrael Beitenu), this ongoing intransigence stems from the "baseless" belief among the most senior U.S. officials that Pollard was not working alone when he spied for Israel while working as a civilian intelligence analyst. Top CIA officials believe that Pollard had an accomplice whom Israel has refused to name or acknowledge, Ayalon told Israel Hayom.

That could be a real reason--or the excuse being used in general for keeping Pollard in prison longer that any other person accused of a similar crime.

Now we sit an wait to see if this time around Jews do not allow Obama to again take them for granted.

Email ThisBlogThis!Share to TwitterShare to FacebookShare to Pinterest
Labels: Obama Won't Release Pollard Unless It Gets Him Votes