Indeed, his [Justin D. Martin's] methodology was a classic example of the sort of statistical recklessness that CJR scolds other journalists for.
Sohrab Ahmari

Justin D. Martin wrote an article, printed on Columbia Journalism Review on Which Countries Jail the Most Journalists Per Capita?.

Though Martin has defended his article and mocked those who questioned his methodology, The Columbia Journalism Review has now published a critique of Justin Martin's article, entitled Statistics and Moral Sense:


To reach his per capita number, Mr. Martin merely divided the number of journalists detained—a number that, in the case of Israel, was debatable to begin with—by each country’s population in millions. As Commentary’s Omri Ceren pointed out, however, “If you want a ‘per capita’ number describing which countries disproportionately target journalists, you divide the jailed journalists in each country by the total number of journalists in each country, not by the total number of people.” Otherwise, tiny Israel—home to a huge press corps and where commentators in the Arab and leftist presses regularly question the state’s very right to exist—ends up appearing more repressive than, say, North Korea, where a totalitarian regime does not permit journalism as such to exist.

Allowing Mr. Martin to skewer the Jewish state using faulty statistics undermines CJR’s role as professional watchdog. But the harm done extends beyond journalistic standards. The ultimate impact of pieces like Mr. Martin’s is a softening of the reading public’s moral intuitions and sensitivities. By placing Israel on the same plane as the likes of Iran and Syria, Mr. Martin minimized the threats faced by journalists working under genuine authoritarianisms—not to mention the broader human rights catastrophes underway in these societies.

This reminds me of a different statistical "proof": statistical proof that storks carry babies. In his 2008 article, Deceptive Data and Statistical Skullduggery Gordon H. Bell writes: 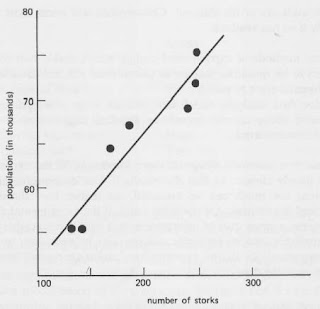 Proof that storks carry babies The old story that storks carry babies is, in fact, supported by objective data. The chart, at right, shows the population of the town of Oldenburg, Germany versus the number of storks sighted each year from 1930-1936. This relationship clearly shows that more babies are delivered (the population increases) when more storks are around to delivery them. This is real, accurate, indisputable data.

The problem is that correlation is not the same as causation. The town of Oldenburg may be an attractive home for both people and birds, but importing storks may not be the most effective path to urban renewal. Using even the most advanced statistical analyses, a correlation between variables does not prove they are related.
Only a well-designed test can prove a cause-and-effect relationship.

Now doubt Justin D. Martin is just the man for the job.

It should be noted that the author of the critique of Martin, Sohrab Ahmari, has some experience with true suppression of Free Speech:


In Iran, where I was born and spent the first half of my life, journalists and writers are persecuted on a nearly industrial scale; dozens of outlets are shuttered every year. Just last month, the Committee to Protect Journalists reported, Nazanin Khosravani, a reformist writer, began serving a six-year sentence in Tehran’s nightmarish Evin prison for the crime of “propagating against the system”—a charge unheard of in Israel. But why should Western audiences care about these very real injustices when seemingly authoritative “statistics” show the West—including Israel and the U.S.—to be equally authoritarian? Mr. Martin thus challenged the common moral sense of his readers, distorting conclusions they would otherwise draw from straightforward reporting on the realities of practicing journalism in free and unfree societies. Will he earn a dart from CJR anytime soon?

Justin Martin is either unaware or indifferent to such consequences.

Technorati Tag: Israel and Justin Martin and Statistics and Journalists.