With November Approaching, More Talk About Obama And His Teleprompter

Now with our attention focused more and more on the November election, the topic of Obama and his teleprompter has come up again. Victor Davis Hanson writes about the difference between Obama off the teleprompter and Obama off the cuff


Conservatives caricature 24/7 Barack Obama’s reliance on the teleprompter. True, his speeches are scripted; but we forget why so: He is very good at reading a prepared script as if he were talking off the top of his head, and he is very bad at actually talking off the top of his head. In the former mode, he sounds pleasantly moderate and mellifluous; in the latter, sort of creepy and awkward.

Yet the result is paradoxical: Obama seems to feel false when he sounds balanced and eloquent reading someone else’s ideas on a teleprompter, and genuine only when he is extreme and ad hoc in his own words. Because teleprompted eloquence is by definition somewhat artificial, Obama believes that his real wit and insight are appreciated only in extemporaneous exposition.

Yet here lies another paradox: His lack of judgment is not evident on the teleprompter, but is only fully illustrated when he is off it and his more extreme ideas are candidly expressed.

...If it comes down to a choice between an eloquent delivery of someone else’s neatly crafted liberal ideas and Obama’s ad-hoc revelations of his own hard-left worldview, it is no wonder why most of us prefer the teleprompter.

While Hanson does have a point--we are more comfortable with the predictable off-the-teleprompter Obama: 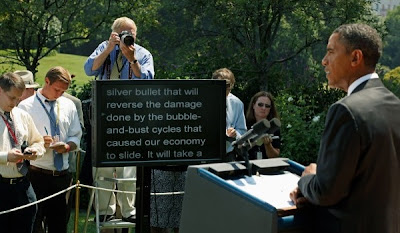 One only has to recall the "hot-mic" incidents where Obama spoke his mind and provided the media with field day after field day with revelations of what Obama himself "really" thought.

But by the same token, it appears that Obama is getting just a little bit too predictable when he has to resort to his teleprompter:

Email ThisBlogThis!Share to TwitterShare to FacebookShare to Pinterest
Labels: Election 2012, Obama and his Teleprompter