Soccer Dad emailed me a link to the following Reuters photo on Yahoo: 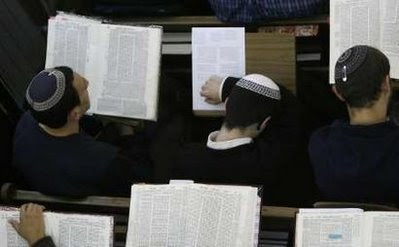 Israeli men pray as hundreds attend a memorial service for eight students, who were killed by a Palestinian gunman in a shooting attack last Thursday, in a Jewish seminary in Jerusalem March 13, 2008.

Rachmones. They want to juxtapose photos of Palestinians mourning for dead terrorists with Israelis mourning for murdered students--and had to make due with what they could find: a picture of students learning Gemorah. According to the caption, these are Israeli men. Actually, these are just kids--about the age of the students who were murdered.

After all, it's not as if they could find Israelis dancing in the street and handing out sweets to celebrate the death of terrorists to juxtapose with the Palestinians...