Yeah, that will strike fear into Israel's enemies and ensure her security.


The Chief of the General Staff, Lt. Gen. Gabi Ashkenazi, announces the new plan, “IDF Protects the Environment”, to the sum of one billion NIS tomorrow, during the inauguration ceremony of the Officer Instruction Base as the first “green base” in the IDF.


The ceremony will be held today with the Chief of the General Staff, Lt. Gen. Gabi Ashkenazi, Commander of the Ground Forces, Maj. Gen. Shlomo (Sami) Turjeman, Head of the Technology and Logistics Branch, Maj. Gen. Dan Biton, and Commander of the Officer Instruction Base, Col. Yehuda Fox in attendance. During the event, the Chief of the General Staff will unveil the “Solar Farm Project”, which includes 400 solar panels and which is expected to save up to 90,000 liters of solar fuel a year. Furthermore, the main points of the “IDF Protects the Environment” plan will be presented, with an emphasis on energy conservation and long-lasting construction in the IDF. The new technological facilities which have been integrated into the Officer Instruction School will also be unveiled. These facilities were built in order to conserve water and electricity, and they include: volume-calculating systems, which save up to 25-35% of electricity, T5 fluorescent bulbs, which save up to 30% of electricity, and rationing water faucets, which save up to 20-50% of water.

The change in perspective which the IDF is currently undergoing, particularly within the Officer Instruction School, is part of the ongoing training process of the future generation of officers. This shift is an important milestone in the implementation of the “IDF Protects the Environment” plan, which has been authorized by the Chief of the General Staff last week, to the sum of one billion NIS. The plan, which is being carried out under the guidance of the IDF’s Environmental Protection Administration, focuses on amending past environmental damage as well as preventing future harm. The IDF’s educational efforts and encouragement to protect the environment, for all military ranks, are necessary to promote environmental awareness in all of the Israeli Army’s decisions.

Nice idea, guys--but you'll never guess who got there first? 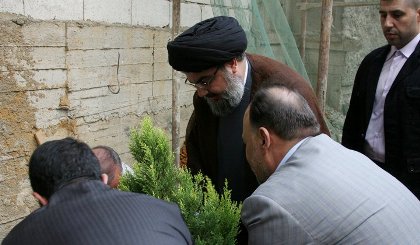